Winging It for River Catfish 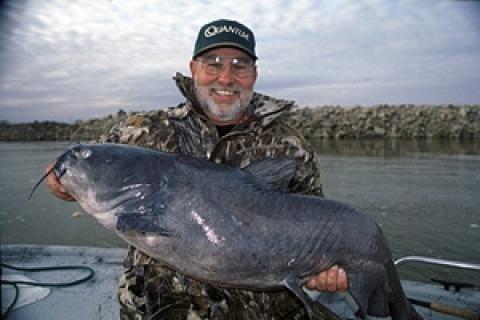 The long rock wall jutted from the bank into the Mississippi River. At the wall's end, the river rolled around on itself to create a huge vortex. It looked like someone had pulled a huge plug from the river bottom, and all the water was going down an enormous drain.

"Suckholes," we called such maelstroms when I was a youngster catfishing the river with older relatives. Some call them "whirlpools." James Patterson of the Mississippi River Guide Service prefers the term "eddy."

"Drop your fishing bait right at the edge of that eddy," Patterson said, "and free-spool it all the way to the bottom." I did as he suggested, and to my surprise, the big chunk of shad went straight down. The instant the bait touched bottom, before I was quite prepared, something huge grabbed it. And when it did, that "something huge" nearly snatched the rod from my hands.

I never saw that something huge. It got the best of me, as the big ones often do. I'm quite certain, however, it was a catfish — probably a sizeable blue. And I learned that day that catfish fans who often fish large navigable waterways should study and understand both structures Patterson and I were fishing — wing *** and eddies.

The rock walls known as wing *** (or wing dams) are placed in strategic locations to help maintain ship channel depth and lessen shoreline erosion. They are most numerous in hydropower and navigation dam tailwaters but may be scattered along the entire length of a big river. They fulfill their intended functions by diverting current. They usually lay perpendicular to shore, and when moving water strikes one, it swirls back on itself. The force of the current then moves outward, toward the middle of the river.

The water velocity slows, allowing suspended sediments to fall and accumulate on the river bottom. Over a period of years, the spaces between wing *** will fill with these sediments. This narrows the river, creating more forceful current in the main channel that sweeps the bottom clean so little dredging is needed to maintain adequate depth for barge traffic.

Inactive catfish typically stay on a wing ***'s downstream side, lying on bottom, usually near inshore reaches. Current is minimal here so rest is possible.

Most feeding catfish, especially the more numerous small cats, hold near the river's bottom on a wing ***'s upstream side. The reason for this is three-fold. First, water hydraulics here create a "tube" of reduced current near bottom running the length of the ***. Hungry cats can feed here without using excess energy. Also, this is an abundant food zone-crayfish and mussels in the rocks; shad, herring and other baitfish holding in the slower cylinder of water. Finally, when the river is high and the wing *** is submerged, catfish can feed on addled or injured forage animals easily captured in the boil-line directly above the rocks and immediately downstream.

You should now understand the basics of wing-*** catfishing: to catch lots of eating-size cats, fish the upstream side. Downstream is rarely as productive.

There is another lesson, however, perhaps even more important: trophy catfish — blues, channels and flatheads — are best targeted around the eddies near the ends of wing ***. This I learned from James Patterson, who often fishes around these "whirlpools" with his clients, and who frequently catches monster cats when doing so.

"I don't fish the eddy part of this rotation," Patterson told me the day I hooked something huge. "Instead, I fish the current along the edges. I have found that catfish in eddy water are not active. Active cats are along the edges, so that's where I want to anchor and fish."

Like most ardent blue-cat anglers, Patterson relies on two primary baits to entice his quarry. "I use live shad a lot, even though they're hard to find," he says. "Cut skipjack herrings also are good bait."

A simple three-way-swivel rig is Patterson's standard. The 2-foot hook leader is tipped with a 3/0 to 7/0 Eagle Claw Kahle hook. The 8-inch weight leader is tied to a 3-ounce sinker. His fishing gear consists of "a heavy-action casting rod with a light tip and a lot of butt strength" and a baitcasting reel that holds at least 200 yards of 20-pound-test fishing line.

"I anchor my boat above the hole I intend to fish," Patterson says, "then cast to the spot and let the reel free-spool until the weight hits bottom. Sometimes I'll have out 200 feet of line. Blues usually hit hard and quick, so rod holders are necessary if you fish more rods than you can hold."

It would seem that a bait tossed to the edge of one of these huge suckholes would swirl round and round. But when done properly, the bait will sink quickly to the bottom and remain stationary. Reposition your rig if necessary to achieve this end, and then prepare for the rod-jarring strike that will soon follow if a giant cat is nearby. Often, big cats cruise slowly through a hole, waiting for something to jolt their taste buds before they rush in to strike. Allow the bait to sit up to 10 minutes, but if there's no bite by then, move and try another eddy hole.

Strikes usually come quick and hard, so use heavy tackle, and keep a firm grip on your rod at all times. One moment of inattention could cost you the catfish of lifetime. I learned that lesson the hard way when my "something huge" got away.

Tagged under
How To Guide
Catfish
Fishing Tackle
Read 16,452 times

All wing dams are not created Equal. Some are great, some aren't. Plus it all changes depending on the water level. They are fun to fish though and the rewards can be great! Shane Mississippi River Catfish