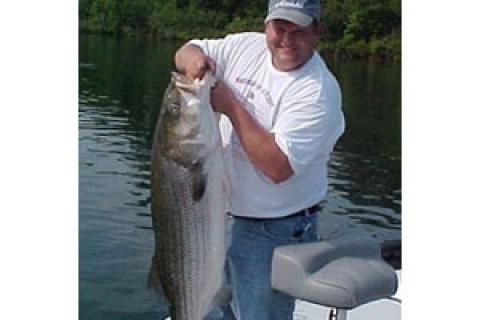 Stripe Bass are seldom thought of as summertime fish, but in the right places, and with the right baits and presentations, you can experience some unbelievable action in hot weather with these monster predators. I'll reveal my summer livebait striper strategies under one condition: that you practice catch and release with these great gamefish.

Landlocked stripers crave cool water (temps ranging from 55 to 65 degrees are ideal) with plenty of dissolved oxygen (up to 8 ppm). In summer, they're unlikely to find these conditions in slackwater reservoirs. In a non-current Sun Belt reservoir, where surface temperatures can skyrocket into the 90s by July, stripers typically have to move so deep to find cool water that they run low on oxygen, and in water with dissolved oxygen lower than 4 ppm, they'll become seriously stressed.

Rivers offer far better summer striper habitat than slackwater impoundments. The water below some of the dams may be a bone-chilling 52 degrees even in August. Stripers move into the headwaters of river-run reservoirs and find near-perfect water temps and plenty of dissolved oxygen, along with a never-ending supply of forage fish. Depending on what river you're fishing, stripers will dine on gizzard shad, blueback and skipjack herring, even eels and rainbow trout. And best of all, live release is highly likely in this cool, highly-oxygenated environment, even in midsummer.

Thirty-pounders are common where I fish; 60-pounders have been taken, and far bigger fish are possible. Couple this fact with the abundance of snaggy cover in most rivers, and you can see why this is no place for Mickey Mouse gear. My favorite bait rod is G. Loomis' BR863C Bucara, a 7-foot, 2-inch medium-heavy saltwater stick that's perfect for heavy-duty baitfishing in rivers — incredibly strong, yet light and comfortable to fish with in oppressive heat. I pair this with an Ambassadeur 7000 baitcasting reel spooled with either 50-pound mono or 130-pound braid. Both lines have their good and bad points: mono has more stretch and is therefore a better shock absorber; braid is softer and resists coiling and twisting. Try both to see which works best for you.

Planer boards are most often used by Great Lakes walleye and salmon fishermen, but they're becoming popular with landlocked striper anglers as well. They're used to present your bait to either the left or right of the boat, and are handy tools for coaxing spooky stripers into striking. In big, open water, planer boards are employed to spread out your presentation over a wide area, but in striper rivers, they're used mainly to deliver your baits close to shoreline cover such as downed trees, logs, boulders, etc.

When fishing large gizzard shad, I use a standard Offshore planer board, and add a large split ring to the trailing end, one big enough to pass a heavy-duty Gamakatsu Octopus hook through. I then hook the shad upward through both lips, peel off from 6 to 12 feet of mono or braid, and pinch the release to my line. The split ring keeps the board on the line when a striper hits, which doesn't impede a big striper's fight in the least and is a lot more convenient than chasing after a loose board floating downstream in swift current.

For skipjack herring, which can weigh upwards of 2 pounds, I'll use a modified Offshore board with a homemade super-heavy release clip fashioned from a stout spring and plumber's washers. A strip of aluminum stock attached to the bottom of the board acts as a keel to keep the board vertical when using these big, heavy livebaits.

In summer, river stripers prowl shallow bars, shoals and flats early and late in the day, and tend to retreat to holes, undercut banks and submerged trees once the sun gets high. These fish are highly catchable even in mid-day when planer boards are used. The object is to run the board/bait as close to the bank or cover as possible. With two anglers aboard, I'll normally let out three boards, two running tight to the bank or other structure I'm fishing, one on the opposite side of the boat in open water, with the shad or skipjack trailing 6 to 12 feet behind the board. Where there's an abundance of wood cover along the bank, I may shorten the distance from the bait to the board to as little as 3 feet; this helps prevent the bait from swimming down into a tree and constantly tangling your line. "How will I know when I've got a bite?" a first-time striper fisherman asked me on a guide trip several years ago as he fished his shad behind a planer board. As if on cue, a 45-pounder blasted his bait, blowing a hole in the river the size of my truck. Trust me — you'll know!

Unlike other baitfishing methods, planer boards let you cover a lot of water fairly quickly, a great asset when you're not exactly sure where the stripers are hanging out — these fish may move several miles overnight. They're an absolute must in clear rivers because they let you keep a safe distance from the places you want to fish. They're not as effective as bottom-fishing in a deep hole, but all things considered, they're the most deadly presentation method I've found in rivers and tailraces.

Suspending a lively bait beneath a cork bobber or balloon is another deadly summer tactic in rivers, one that works either by itself or in conjunction with planer boards. I generally use a float line as an adjunct to my planer board presentations — I'll run one line with a large cork float on it directly behind the boat, about a cast and a half back. I find this line most often gets smacked early or late in the day, when stripers are roaming shallow structure and aren't holding tight to cover. But once the sun gets high, I'll use the float line for a totally different kind of presentation, one I call Kamikaze striper fishing.

Often I'll spend the first hour of the fishing day casting topwater plugs, and big stripers, like muskies, have a habit of following a lure to the boat without striking it. When this happens, I'll make a mental note of the stretch of bank, sunken tree or boulder where the fish was, then go back later and cast a big shad dangling beneath a cork to its lair. This is absolutely the most exciting freshwater fishing imaginable, especially in clear rivers where you can see the fish react to the bait. With the boat positioned as far from my target as possible, I'll lob the bait slightly upstream of the target and let the drifting cork pull it downstream. Often the loud, wet splat! of a big shad smacking the surface is enough to trigger one, two, even a dozen big stripers to move in for a look-see. Hookups can be instantaneous, violent and downright scary with this extreme form of striper fishing. However, it also pays to be patient with a float rig when conditions are tough. I've soaked a shad in a submerged tree as long as 20 minutes during a cold front before the hawg striper sulking there finally couldn't stand it any more and ate it.

Don't be afraid to cast a baited float line into any likely-looking striper spot you come to, whether or not you've previously raised a fish from it. High-percentage holding areas include large pockets or indentations in the bank, current eddies and switchbacks, submerged logjams, etc. A submerged tree in the middle of the river is an especially good place to try this technique.

Float lines can also be employed to tempt fish holding around downstream cover or structure in clear rivers. For example, if I know several stripers are prowling a shallow gravel bar downstream, I'll tie my boat to a tree limb and let my float line out so the shad swims downstream into their lair. If the current isn't too swift, I'll engage the reel and let the bait swim back and forth over the bar until it gets plastered.

The river-run reservoirs I frequent have many sheer limestone bluffs; these are a popular haunt for stripers in hot weather, especially during high-light periods. Often the old river channel runs along these bluffs, making them the deepest structures available to stripers, and thus a likely haven during a frontal passage. In summer, with the water temp in the low to mid 60s, I'll often find stripers suspending around these bluffs anywhere from 12 to 20 feet deep.

Bluff banks are best fished with downlines, a bread-and-butter striper presentation method that slackwater reservoir anglers use when targeting fish suspended in open water. I'll alter the rig to work in swift current and snaggy cover by using a sliding egg sinker weighing between 1 and 2 ounces, depending on current speed, to keep the baited line as straight down as possible, and 40- to 50-pound mono on both the main and leader lines. Rods are placed in holders with the reel drag adjusted to slip some, but not much. I've had big stripers bust downline rods like matchsticks, so take the time to get that drag adjusted right!

Long-time striper hunters will tell that when fishing downlines, you should keep your bait positioned at the level of the stripers or slightly above them, but never below them. This is a good rule of thumb to follow. Watch your graph for tell-tale hooks indicating stripers, then peel off line a foot at a time from the reel, taking care not to get it too deep.

Stripers often school along bluffs, which can make for some frantic fishing. On more than one occasion I've had four downlines "go off" at once, and the ensuing Chinese fire drill is not to be forgotten.

River stripers will actively feed on dead, injured and healthy baitfish on or close to the bottom. They'll also devour bits and pieces of dead fish, especially below dams, where the turbines act like a Cuisinart to chop up shad and herring. These facts make bottom fishing a deadly option.

In summer, most of the river rats I know bottom-fish at night — it's a good way to escape the heat. Using a Carolina rig with a heavy sinker, they'll anchor above a hole and cast either a live shad or skipjack, or cut-up chunks of these fish (known as "cut bait"), on a stout hook. A leader from 18 inches to 3 feet long is employed; this enables the live bait sufficient freedom of movement to attract the attention of a striper, and allows cut bait to dangle enticingly in the current like so much sushi.

If you crave fast action, bottom fishing isn't for you. I consider it a last-resort method, one to try during cold fronts when the fish have lockjaw. However, I also know that some of the biggest landlocked stripers ever taken have been caught using this tactic. If you know where a big cow hangs out, and you can't get her to bite using the other tactics I've mentioned, try bottom fishing. You just might get your string stretched.

Score Big Bass on Your First Fishing Trip of the Year