Is Fishing a Texas-Style Rigged Senko Sheer Genius or a Joke? 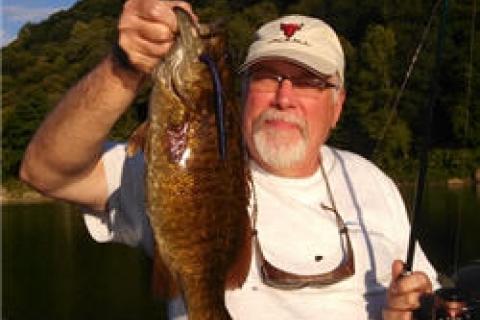 It’s pretty easy to think of certain baits such as the Senko (and similar cigar-shaped sinking worms such as the Stik-O by Bass Pro Shops), as being a great presentation but limited to wacky rigging just prior to and during the bass spawn.  However, Senkos are effective throughout the summer and early fall, as evidenced during a recent trip for river smallmouth bass.

Senkos baits are one of my friend Mark’s confidence baits; he fishes them often when he joins me.  We frequently fish a section of impounded river, short lake-like river sections that stretch six to 10 miles between lock and dams.  During these outings, which typically take place during the last hour or two of daylight, Mark scores on bass with a wacky rigged Senko, tossing it close to bank-hovering willows that sit in a foot or so of water.

On our most recent outing, however, we were on a section of free-flowing river, well upstream of the impounded waters.  The smallmouth along the rocky bank were showing little interest in Mark’s wacky-rigged Senko, though I was picking up fish pretty regularly with a fluke-style soft jerkbait.  Mark made a slight rigging adjustment, altering the Senko’s look to a Texas rig with a small slip sinker.  Within a cast or two he was into a three-pound-plus smallmouth.  The Senko continued to produce for him during the evening’s fishing.

Here are a few tips on fishing a Senko Texas-style:

Jeff Knapp, of Kittanning, Pa., has been covering the outdoors for over 20 years. He's been published in a wide variety of national, regional, state and local publications. He also operates the Keystone Connection Guide Service, which focuses on fishing for smallmouth bass on the Allegheny River, as well as other species in select western Pennsylvania waters.Â
END_OF_DOCUMENT_TOKEN_TO_BE_REPLACED