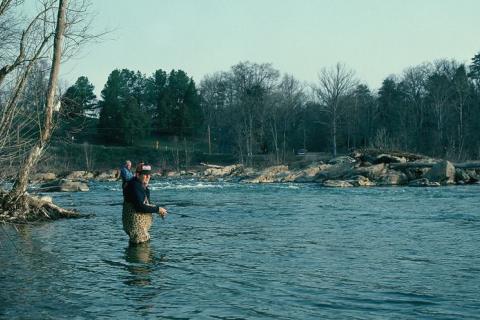 Mention river smallmouth fishing and most people picture shirtsleeve weather, drifting leisurely downstream on a sunny summer day, and catching lots of scrappy, but mostly small bass. That’s okay because their numbers and the gorgeous weather make up for the lack of size.

But if you’d rather catch fewer fish, but the biggest bronzebacks of the year, hit the river in late winter and early spring, before trees leaf out and before the crowds of other anglers and float tubers descend on the streams. Instead of dozens of fish caught and released, you may only draw 10 or 12 strikes and boat half a dozen fish. But odds are good most of those fish will be beautiful specimens in the 2-6 pound class. Even a couple smallmouths like that can make for a rewarding day on the river.

A Transition Time for River Bass

This is a time of transition for the river and its bass. After hovering in the low to mid-30’s for much of winter, water temperatures start to warm. Just a few degrees increase can stir increased feeding.

About the lowest temperature you can take river bass in is 35 degrees. Most smallmouth experts say that’s the cutoff point. Once the temperature rises into the upper 30’s, more activity and stronger bites are likely. In the 40’s you can expect consistent quality fishing. 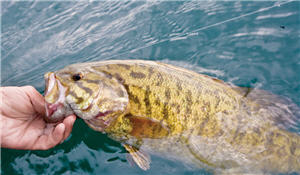 When to Fish: Best Time of Day & Water Temp

Timing can be critical during the early season. Try to get on the water after two or three days of a warming trend, when either still or southerly winds prevail.

Water temperatures will rise several degrees during these warm spells and fish will feed heavily. The best bite will often take place from mid-morning until late afternoon when river temperatures are the highest.

Tip: Avoid hitting the water during or just after a cold front pushes through with northerly winds. Bass will sulk in the deepest holes at this time and rarely strike.

Where in the Rivers to Fish

Some smallmouths will be feeding in mid-river pools during early season. Look for the slowest and deepest ones. Then target your casts to the bottom rubble and ledges where they hang out because of decreased current they have to fight there.

The majority of big bass in rivers that are actively feeding when water temperatures are in the upper 30’s and 40’s will be found in eddies and back currents near shore. That’s where they find minnows, nymphs and crayfish. The water in these shoreline back eddies also tends to warm up more quickly than the main current.

Tip: Another hot spot in winter and early spring is to go fishing around a power plant discharge where warm water is released into the river. Don’t fish right in the outlet water. Instead, probe the areas from 100-300 yards downstream where the water is slightly warmed but still close to the temperature in the rest of the river. 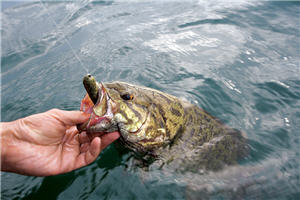 In summer most anglers like clear water. For late winter and early spring fishing, slightly off-color water is usually best. The stained water holds more heat and often comes after warm rains, which raise the river level and stimulate feeding. The darker water also seems to calm the fish and make them easier to approach with a boat or by wading.

Tip: The high water that comes after rains can concentrate fish for you in pockets and eddies behind boulders and logjams near shore where they try to escape the brunt of the main flow. Time your trips for these periods after rains when the water is just starting to rise and slightly off-color, but not totally muddy. 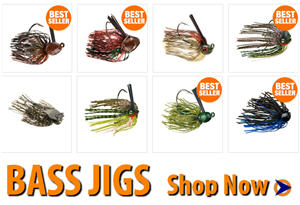 Weight can vary from 1/8 to ¼ ounce according to the speed of current and depth of the water. You want the jig to sink to the bottom where you can crawl it over rocks and mud like a crayfish or wounded minnow. On the other hand, you don’t want it to sink too quickly.

Many strikes will actually come on the “drop.” Be flexible and change jig weights from spot to spot if required. You can hop or twitch the lure, but usually a slow, crawling presentation is best. Every now and then pause to let the jig sink back to make sure it’s close to the bottom.

If snags aren’t common you may be able to get away with a plain hook. Normally, however, a weed-guard will keep you from losing lots of jigs and save time unsnagging others.

If jigs aren’t producing, or if the water temperature has warmed several degrees, more active baits can work well. Try a suspending or sinking thin-minnow plug or jerkbait or small medium-diving crankbaits with a tight wiggle. Lures that run 4-8 feet deep are good choices. A slow, steady retrieve works best.

Tip: If the bass aren’t cooperating, try a stop-and-go presentation. Reel a few turns, and then pause. Strikes will often come as you start to reel again. 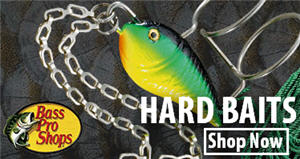 Tip: Try fishing with crankbaits after a rain when the water has warmed up and turned slightly off-color. Bronzebacks can be particularly aggressive in these conditions.

No one would want to give up those relaxing summer float trips in cutoffs and tee-shirts. But for the biggest river smallmouths, hit the water in early spring!

Gerald Almy has been a full-time outdoor writer for over 35 years, with articles published in over 200 publications. He has written hunting and fishing columns for many newspapers both in Virginia and Texas, as well as the Washington Post. He has written two books on fishing and contributed chapters to a number of hunting books. He has won many awards for his writing. In 2008, a feature he developed for Field & Stream and wrote for five years called “Best Days of the Rut,” was nominated for…
END_OF_DOCUMENT_TOKEN_TO_BE_REPLACED