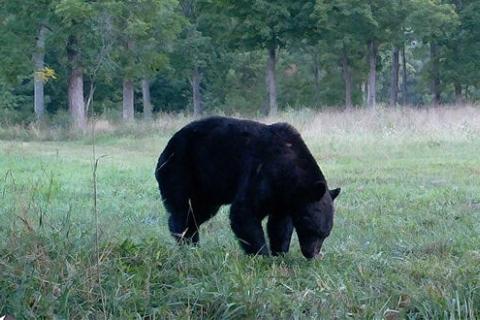 It was bear season and we were heaving ourselves to the ground after a 1,000 foot vertical climb up northwest Montana’s Cabinet Mountains.  As we  struggled to catch our breath we immediately grabbed our optics. We had scaled the steep terrain shortly after dawn to get a good vantage point for glassing across and down into canyon side hills and benches for foraging spring bears.

And the first bear we saw, a thickly-furred cinnamon-colored bruin, was 1,000 feet below us in a grassy meadow! When no other bears showed, we made the long, steep trek back down to look for that bear--only to find he had vanished in the thick woods.

TIP: 11 Things You Should Take on Black Bear Hunts (infographic)

That was the start of my first high-adrenaline spot and stalk spring bear hunt years ago. The vast majority of bears in spring are shot over bait. But if you’re interested in a more active approach, there are plenty of opportunities in the western U.S. and Canada, with prime hunting running from April through June. The Rocky Mountain States, Alaska, British Columbia, and Alberta are the top destinations.

Because of the need to see long distances, areas with mountains and lots of open country are the best bets for hunting bear using the spot and stalk technique.

Watch video: Allen Treadwell talks about what you should pack on your spot and stalk hunt.

Where to Find Spring Bears

Hillsides, bluffs, benches, avalanche slides, meadows in forests, logging trails, clear-cuts and wet, mossy openings are all potential hotspots in spring. The very earliest bears will often be found high on hills near dens on north slopes where they move out tentatively to feed a bit as snows start to leave and the first grasses emerge. Once they completely abandon their dens, usually in April or early May, bears generally head for the low country just below the snow line.

From there they follow the receding snows up as spring green-up edges higher up the mountain each week. South and south-west-facing mountainsides become most productive at this time because they receive the most sun and green up the fastest.

What do Spring Bears Eat?

Spring bears in mountains eat ants, grubs, fiddleheads, sedges, and roots and leaves of flowers such as trillium and glacier lily. They also consume lots of tender green grass and the odd winter-killed deer, elk, or beaver. Pinpoint these foods and you’ll find your quarry.

Locate good points on knolls or ridges where you can see a large amount of potential bear habitat and then glass the cover meticulously. I like 10 and 15 power binoculars. Use the 10’s for searching, and then switch to the 15’s or a low-power spotting scope for checking the hide and aging and sexing the bear.

Move with slow, horizontal sweeps of the binoculars, and then back across just below the section you scanned. Rest your eyes for a while then recheck the area in case you missed a bear or one just stepped out.

When to Start the Hunt

Start at dawn if you have the energy. But in spring that makes for an awfully long day. Most bears actually sleep late and don’t start roaming until around 9 a.m. You’ll do better to sleep in, too, and plan on hunting late into the evening, when most activity takes place.

When you spot a bear that looks to be mature, analyze the situation and make a realistic judgement as to whether you can get to the quarry before it disappears into dense cover. If it’s late in the day and far away, make a note of where the bear is and try to be there the next day. Or find a closer bear.

When planning your approach to a spotted bear, try to see if you can stalk to a point on an opposite hillside, then shoot across. This makes it easier to spot the animal and get a clear shot than if you were on the same hillside with it.

The trajectory will be in a mostly straight line and you’ll be able to see what the bear does after you squeeze the trigger. Follow-up shots will be easier, too, because of the greater visibility across the canyon.

Use a rest whenever possible and aim carefully at the heart-lung area or the rear of the front shoulder before smoothly squeezing the trigger. Whether its coat is chocolate, blonde, cinnamon, or glossy black, when you approach your fallen quarry after days of glassing, stalking, and wearing your body ragged, you’ll feel one of the richest thrills our sport has to offer—success on a fair-chase spring bear hunt.

For me, that moment came on the third grueling day of climbing and descending the mountains of western Montana’s Kootenai National Forest. We’d seen nine different bears, but I couldn’t have written a better script than to relocate and cleanly harvest the very first bear we’d seen on our wilderness adventure.

And that’s exactly what we did.

Watch video as RedHead Pro Hunting Team member Allen Treadwell talks about what you should pack on your spot and stalk hunt.

Know the rules and always check with local hunting authorities regarding the laws and regulations for hunting bear hunting.

How to Choose the Right Gear for Black Bear Hunting

Gerald Almy has been a full-time outdoor writer for over 35 years, with articles published in over 200 publications. He has written hunting and fishing columns for many newspapers both in Virginia and Texas, as well as the Washington Post. He has written two books on fishing and contributed chapters to a number of hunting books. He has won many awards for his writing. In 2008, a feature he developed for Field & Stream and wrote for five years called “Best Days of the Rut,” was nominated for…
END_OF_DOCUMENT_TOKEN_TO_BE_REPLACED