Hunting Exotics in the States 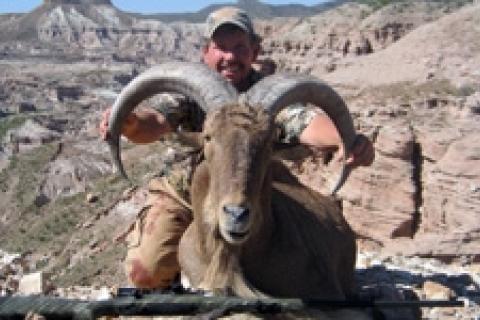 North American hunters are blessed with a tremendous variety and abundance of native big game animals to pursue. From deer to sheep to bears, there are enough choices to keep us busy for a lifetime. But certain areas also have increasing opportunities to pursue species that, while not native to this continent, can provide just as much challenge, sport, recreation and fine table fare as anything Lewis and Clark would have encountered. They're known as "exotics" and they are worth pursuing.

Each species of exotics was originally introduced to North America either to create hunting/commercial opportunities or to preserve a species that may be threatened in its native European, Asian or African homeland. Whichever the reason, some of these introductions have been largely unsuccessful, while others have been so successful that some populations in North America now outnumber those in their native areas.

Although there are huntable but lesser-known populations of exotics in a number of states, such as California and Hawaii, by far the two states with the largest populations and opportunities are New Mexico and especially Texas.

Of the exotics species available, the most popular are Barbary sheep, oryx and Persian ibex. Unlike much of the hunting opportunities in Texas, these species are free-ranging in New Mexico. Contact New Mexico Department of Game & Fish for more information.

Also known as aoudad, these mountain sheep of North Africa can actually be hunted year-round in some areas of the State, with over-the-counter tags. The best trophy opportunities, however, are in limited draw public and private lands.

This large, striking antelope is native to the arid areas of Africa, making it well-suited to the climate of the U.S. southwest. Best opportunities are through private land permits.

As the names suggests, this member of the wild goat family is native to western Asia, particularly Iran. They sport impressive, rearward-curving horns, and the trophies available in New Mexico may be superior to their native land. Best opportunities are through limited-entry public land hunts.

The Lone Star State incredibly has some 80 species of exotic deer, antelope, sheep, goats and others, mostly on private ranches. Outfitters such as Wildlife Systems Inc. have access to just about anything that might interest you. But some are also free-ranging, and the most popular of these are aoudad, axis deer, blackbuck and nilgai. Please note that although exotics are not managed or regulated by the state of Texas, some public hunt limited draws are held. Contact Texas Parks & Wildlife Department for more information.

Public draw hunts are held in some areas, while aoudad are actually culled in others areas to protect the native Desert bighorns.

Native to India and surrounding areas, these spotted deer can breed year-round and males are known to bellow to attract females during the rut.

This spiral-horned Indian antelope makes a handsome trophy, with mature males sporting long horns and a near-black head and back.

While not everyone has the desire or opportunity to hunt far-away lands in search of exotic big game, some of these same opportunities are available much closer to home.

Chasing Antelope With a CVA Accura

How To Layer – Apparel Buyer's Guide