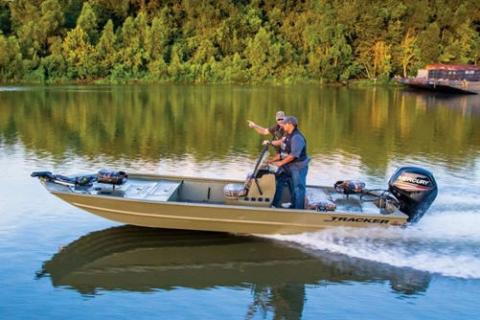 Any attempt to describe how to run shallow rivers is beyond the scope of this article, perhaps any article, since this is a classic example of experience being the best teacher. The trick is gaining that experience navigating a shallow draft boat without cracking a hull or smacking the jet's intake foot. The following tips should help you accomplish that.

Start off by taking things slow. Take your maiden voyage on deeper water, where you don't have to worry about hitting shallow obstructions. Get a feel for the boat. Jets handle differently than prop-driven boats, particularly at low RPMs. You'll miss the "bite" of the propeller, especially during your first attempts to drive the boat back on the trailer.

Once you've gotten accustomed to the boat's feel, it's time to begin learning to navigate shallow water. If at all possible, learn new water by navigating upriver. It's easier to read water when you're looking "uphill."

Rivers have current and that current will reveal subsurface obstructions. Current flow over individual rocks will produce a boil. The boil will be downriver of the actual rock. Like a pothole in the road, you'll want to avoid running directly over the boil.

Riffles are formed when the slope of the river increases and the resulting faster flow encounters rocks. Bigger rocks, which are likely closer to the surface, tend to produce more "whitewater;" often the key to running these areas is in weaving between the bigger "waves." Every riffle area is different, though, and must be learned on an individual basis.

Often some of the shallowest spots in a river are immediately upriver of a riffle area. As a deep pool gradually tails-out before spilling into the riffle, conditions often get quite thin, especially if the river widens at that point. The shallowest water will often exhibit a ripple across the surface, caused by current flowing a mere couple of inches above gravel. Typically there's a "tongue" of slightly deeper water which shows itself as a "V," indicating the channel to take.

In hilly country there will often be a steep side to the valley, and a flatter "flood plain" side. The deeper channel is usually closer to the steeper side. 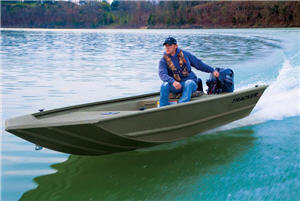 It's common when fishing a shallow river in a jet boat to drift downriver through potentially productive areas. If you can drift down through an area, you can run back up it, as the boat takes less water when on plane that it does when not under power. In summer, when the water's typically at its lowest, be sure to wear some type of water shoe (or old sneakers) should you drift up on a rock or shoal. The same goes for your fishing buddy. Removing the passenger weight from the boat should allow it to float free, though you'll likely have to give it a boost.

Expect to have a few white-knuckle moments as you ride the river-running learning curve. The first couple times, when out of the corner of your eye you see shallow rocks whizzing by at 30 mph, you'll likely back off of plane, sink down and nudge a bottom you'd have otherwise missed. But soon you'll gain the confidence to shoot through these spots as you discover what your new fishing tool is capable of.

Are You Boating Safety Smart? Take This Quiz to Find Out!

What's Your Favorite Type of Wine While Relaxing on the Water? (poll)

5 Revealing Questions to Ask When Buying a Fishing Boat

Jeff Knapp, of Kittanning, Pa., has been covering the outdoors for over 20 years. He's been published in a wide variety of national, regional, state and local publications. He also operates the Keystone Connection Guide Service, which focuses on fishing for smallmouth bass on the Allegheny River, as well as other species in select western Pennsylvania waters.Â
END_OF_DOCUMENT_TOKEN_TO_BE_REPLACED