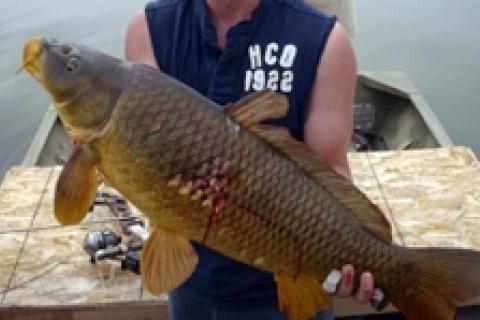 Since the first time I started bowhunting three decades ago, bows have progressed light years. Now it could be intimidating to get in to bow hunting since it seems like everyone is so high tech, but one great way to get started is bowfishing. It's a blast and does our lakes and rivers good by cleaning out the trash fish. If you miss a shot it's not like elk hunting where it may be your only shot of the year. So what? Cruise on another 20 feet and take another shot. And there are many ethnic groups like eating them so you may try to have someone lined up to take your fish to before you go.

Once while fishing I saw some 15- to 20-pound carp and that's what prompted me to start bowfishing. I bought a Fred Bear Whitetail Hunter bow and put a spool on it. I still use that old bow because I don't want to tear up my good bow. When bowfishing, you're going to be throwing it around and banging it up pretty good. Plus you'll get it all slimy and muddy. You don't have to go all out and buy a super nice bow to bowfish, just pick up an old bow at a garage sale and you'll be in business pretty cheap. As far as fast shots, I'm not too sure that a recurve isn't better than a compound.

For a reel I've always used my old Fred Bear reel. Years ago they started making the Zebco looking reels. Now there's bottle type reels as well. The line is stored in a bottle and zips out when you release the arrow. I can see how these may be better than mine. It's a real pain when you're walking down a slough and draw back to shoot and notice that your string is hung up on a bush 15 feet behind you. You have to always make sure that the string isn't tangled on your sights, brush or something.

For string you'll want some stout bowfishing line. It will be rubbing on rocks, zipping through fish and so forth so it needs to be fairly stout. Plus, if it breaks off you lose a $20 arrow. Personally I don't like super heavy line. On my old bow I think I have 60-pound, which is a little light but for my newer reel, I have 200-pound, which to me is a little heavy.

Fishing arrows are made out of fiberglass although now they have carbon ones as well. I've used a lot of different types tips and arrows but right now I have two different tips, Muzzy Stingray Points and Muzzy Classic Fish Arrow with Quick Release Carp Points.

If you decide to purchase another style, just make sure that it has a tip that you can release fish quickly with. When I first started bowfishing years ago we had some arrows that required that you unscrew the tip all the way off, slide the arrow through the fish and then screw the tip back on.

When shooting was hot and heavy this was a pain. Plus, if you were in a hurry you had trouble holding on to all the tips, barbs and so forth with fish slime on them when you were scrambling.

If you're shooting deep it can get tricky. Even a heavy fiberglass arrow will deflect upwards somewhat. Then to further complicate things, you have the refraction factor. When you see a fish semi-deep you must aim below him. He is actually deeper than you think and if you don't compensate you will shoot over him. Wear polarized sunglasses to cut the reflection off the top of the water so you can see the fish better.

I love hunting carp in the spring when they're spawning and have hit three in one shot before when the males are in a line following females, but I've had great times later as well catching them in the willows or up in the flats feeding.

To hunt in shallow marshy water it's best to use a little Jon boat with a trolling motor. You have to be semi quiet in shallows because they'll spook since they're scared of getting snatched up by predators.

I've shot a million wading around, but the ultimate is hunting them out of a Jon boat with an elevated stand. Being up high, you'll be able to see them a lot better. On good days you can literally fill your boat.

It doesn't take a powerful bow. Fish flesh is extremely soft and half the time your arrow will zip through them anyway. So don't feel out classed if you don't own the ultimate bow for fishing — you'll be OK.

My buddy Scott McGann always tapes up his fingers so he doesn't get burned pulling in the big ones. He recommends using the regular white athletic adhesive tape and wraps his fingers.

Some people use a release but many don't. Some use a shooting glove. If you use a glove then you won't have to tape your shooting hand other than maybe your little finger. On a good day you'll be glad that you wrapped your fingers.

If you're shooting super big fish, you may want to use a dip net. It will help keep from losing some of the bigger fish and may also keep from having your string getting cut and losing your arrow. I never use one but it's an option.