Harvesting Your Own Maple Syrup 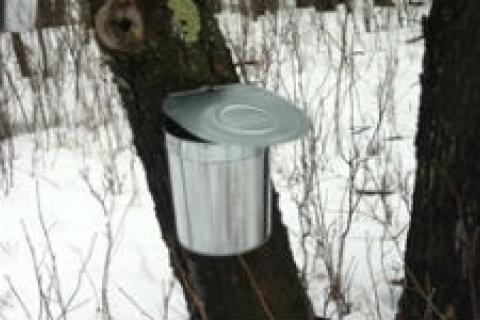 Early April is maple syrup season in Wisconsin. There is not much that can compare to the delicious flavor of natural maple syrup. If you have access to a few maple trees, whether growing in your front yard or in a grove, you can produce your own maple syrup and even enough extra to use as gifts for family or friends. Syruping is easy, fun and a very rewarding way to spend some time in the outdoors with the whole family.

Generally the sap starts to flow between mid-February and mid-March. The exact time of year depends upon how far north you are in the state and the current weather conditions. Sap flows when daytime temperatures rise above freezing (32 degrees Fahrenheit / 0 Celsius) and nighttime temperatures fall below freezing. The increasing temperature creates a pressure buildup in the tree generating the sap flow. Overall the process can be seen as a transfer of the sap from the tree above the ground and the root system below the ground. For most normal sap seasons the flows run for approximately 4 to 6 weeks, with the best sap being produced early on in the sap-flowing season.

Maple sap can be collected from any native species of maple, but in Wisconsin, sugar, black and red maples are the preferred trees to tap. The process of making maple syrup from sap requires boiling off the water portion of the sap until the desired sugar concentration is achieved. The sugar content of sap from different trees can vary tremendously.

The average maple tree produces sap with sugar content between 2-3 percent. Sugar maple trees (Acer Saccharum), also known as rock or hard maple, are the best producers. The higher the concentration of sugar the less sap is needed and less time and energy are required to produce that tasty syrup.

The actual evaporation process for making syrup is what most people picture when they think about making maple syrup. The cooking process can take anywhere from 4-8 hours depending on the volume of sap you have to cook down and the size of the evaporator pan you plan on using. Standing around an open fire and smelling the sap evaporating is a one of the most relaxing ways to spend a warm spring day outside.

How to Make Maple Syrup

To make sap into syrup you simply have to boiling off the water content of the sap. This boiling off process can increase the sugar content as high as 66 percent and causes chemical changes, which will darken and thicken the syrup. The amount of sap required to produce a gallon of syrup depends on the sugar content of the sap. On the average, in Wisconsin, it takes 40 gallons of sap to produce a gallon of finished syrup.

To process syrup, an evaporation system is necessity. Most hobbyists use an evaporation pan large pan, made of stainless steel 6 to 8 inches in depth) and a batch approach to making syrup. With this approach, sap is added to a pan and heated continuously. Replace the sap as the evaporation process occurs. To avoid burning or scorching the pan, monitor the heat carefully and keep at least 1 1/2 inches of liquid in the pan at all times.

After you run out of fresh sap to add to the pan, continue the evaporation process until entire batch is cooked down to the desired density and temperature. Keep in mind that finished syrup boils at 7.1 degrees above the boiling temperature of water. Monitor the heat very carefully as you finish your syrup. Finishing the syrup at the correct temperature is crucial to producing a high quality product.  Be sure the syrup temperature reaches the correct finishing point, and this is best done by the use of a good digital candy thermometer.

Once you are satisfied with the finished syrup, filter it through a clean wool or synthetic syrup filter to remove any sugar sand. After filtering, syrup that is to be used immediately can be cooled and refrigerated. The remainder of the syrup should be processed hot in canning jars. For safe storage, syrup temperature for packaging should be at a temperature of at least 180 degrees.

Standing around an open fire and smelling the sap evaporating is a one of the most relaxing ways to spend a warm spring day outside. Although the process may seem a bit long and laborious the end rest is well worth the work.

Have Some Fun & Fly Fish for Bluegills, The Seasons, The Patterns, The Presentation

Before You Camp, Use This Guide for Handy Tips & Trusted Gear

How to Remove a Tick Embedded in the Skin (video)

Jason Akl is a writer, commercial fly tyer and guide with 15 years in the industry. Professionally, he's been a seasonal guide and fly tier that ties commercially and teaches tying classes to both adults and children. Most of his flies make their homes in fly shops in the northern Midwest but some have found their way as far as Europe. As a freelance writer, he's had many written pieces appear in both Canadian and American publications, as well as numerous global websites. When not on the…