How to Catch Catfish: Fishing for Catfish Tips & Trophy Flatheads 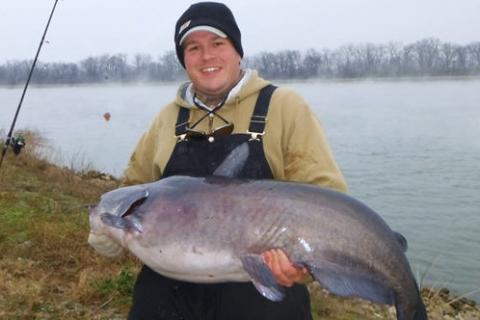 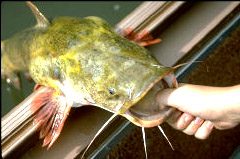 Flatheads are the sumos of fresh water fishing . Ten- to 20-pounders are common, and catfish 5 feet long weighing 140 pounds have been caught in recent times. In North America, only blue cats, white sturgeons and alligator gars grow larger.

Catching big flatheads, though, isn't easy. Heavyweights of this species provide some of the most challenging fishing in America. You can be successful, however, if you follow a few tips.

Don't bother fishing for trophy flatheads unless patience is one of your primary virtues.

Catching trophy flatheads doesn't happen every day, even for those thoroughly familiar with their everyday habits. You may spend hundreds of fishless hours trying to pinpoint a single trophy fish. And as the hours pass, the doubts begin to grow, and you start wondering if it's really worth the bother.

That's why many anglers give up flathead fishing even before they land their first big fish: they don't have enough patience. And without patience, you don't stand a chance.

Learn to bide your time without undue perturbment. Carry something comfortable to sit on, plenty of cold drinks and snacks, a good supply of insect repellent, and a buddy to talk to. It'll be a long night. Maybe several long nights. But sooner or later, the patient catter reaps his reward.

If you want the best chance of catching a trophy, fish when the water temperature ranges between the low 70s and the mid-80s; that's when flatheads are most active. May through October is peak flathead fishing season in most parts of our region.

Focus your fishing efforts on large rivers and lakes. 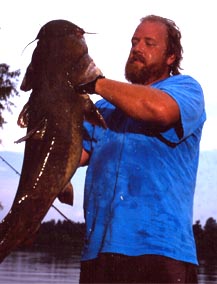 Trophy flatheads seldom come from creeks, ponds and small lakes. It happens occasionally, but not often enough to merit your attention. When seeking a true heavyweight, focus your fishing efforts on large rivers and lakes.

Each river and lake also has specific areas on which you should focus your attention. In rivers, look for flatheads in areas with a steady water flow and hardened mud or gravel bottom. The outside bends of rivers are among the most productive hotspots. Potholes in the river bottom also tend to concentrate flatheads, as do the upstream sides of underwater humps, shallow flats and drops near tributary mouths, and the whitewater tailraces below big dams.

Lake-dwelling flatheads usually seek cover near areas of fast-breaking structure. A depthfinder can help locate flatheads stationed on or near stream channels meandering across the bottom. Inundated ponds are honey holes, since they offer flatheads easy access to both deep-water holding areas and shallow feeding spots. Other areas to investigate include current-breaking cover where streams feed the lake, sloping points near the junctions of inundated channels, and steep rocky ledges with adjacent timber.

Be a night owl, or at least an early bird.

Big flatheads are primarily nocturnal feeders, and whenever possible, anglers should be on the water during hours of darkness. Unfortunately, late-night fishing presents problems for many working flathead fans, but there is a good alternative — fishing the hours around daybreak, 4-8 a.m. There's nothing magic about this time, but on many waters, peak feeding activity occurs just as the sun is cracking the horizon. If you can't fish at night, fish at dawn.

Hooking a trophy flathead requires an enormous investment of time. If you want to land that trophy when it finally grabs your bait, you should also invest in good heavy tackle. An angler using too light or poorly made gear may see his rod or line snapped in two like a stick of dry spaghetti, or stand in amazement after his favorite fishing reel has been turned into a hunk of inoperable metal and graphite.

Most ardent flatheaders favor heavy-action rods 7 to 9 feet long, big heavy-duty levelwind or spinning reels, and at least 30- to 50-pound-test line. Forty-pound line is about right in most waters, but if there are snags, you may have to go heavier — 70, 80 pounds.

Hook size should correspond to the size of the bait. As a general rule, for 4- to 7-inch baitfish, a size 2/0 to 4/0 hook is adequate. Where 50-pound-plus cats are a possibility, 5/0 to 9/0 hooks may be in order. The hooks should be honed to needle-like sharpness.

Use live fish for bait, nothing else.

Shad and sunfish are the primary foods in many Southern waters, but chubs, small carp, bullheads and suckers also make up a large part of the diet. "Domestic" baitfish like goldfish and large shiners also are popular flathead baits and may be easier to obtain than wild baits. Be sure to check the laws to know what's legal where you'll be fishing.

To exclude small fish from your catch and zero in on the trophies, use the biggest legal bait you can obtain. For giant flatheads, this may mean a bait weighing eight ounces to two pounds or more. You can't cast a bait that size, but you don't have to. Rig it up, then use a boat to place it right where you want it.

Know how to properly play and land your fish. 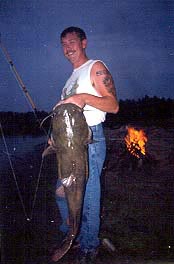 If your hook strikes home, prepare for yet another challenge — overpowering your quarry. Landing a heavyweight flathead does not involve fair play, at least not from the flathead. It is bound up with drag-melting, muscle-cramping power runs, endless minutes of adrenaline-fueled skirmishing, and a blatant disregard for the topside opponent. In other words, it is war minus the shooting.

A sizeable flathead may peel off a hundred yards of line before you ever turn its head, but if you can keep the fish away from cover and play it properly, you may, with any luck, eventually subdue it. Remember, first, that you don't fight the fish with the reel. Play the fish with your arms and the rod, and store line on the reel. When playing the fish, point the rod straight up, and allow the bend of the rod to tire the fish. Hold your ground while the catfish is fighting, then when it eases up, lower your rod tip toward the water, reeling on the drop. Be patient, and don't apply unneeded pressure.

Another important tip: be sure your drag is set at some point below the breaking strength of your line. Then, when a cat applies pressure, the drag will slip and give line rather than allowing pressure to build to the breaking point.

Keep a big landing net like the Bass Pro Shops Catfish Net handy, too. It's darn near impossible to land a giant flathead with your hands — in a boat or on the shore. Get it in a net — a big sturdy net — or risk losing it.

When you finally land your first big flathead, you can be proud that you've managed to triumph over one of freshwater fishing's finest trophies. Catch your second, third, and fourth big flathead, and you enter a class of elite anglers. Only a handful of fishermen can catch the big ones consistently.

Good article...like to have one on catching eating size catfish overnight in a reservoir...trot line, set hooks etc.