Try These Few Tips for Targeting Crappie in the Reeds 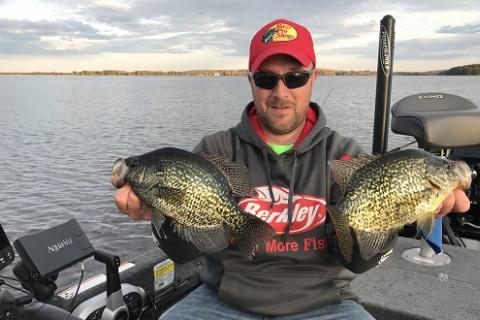 Every Spring in the upper Midwest a crappie migration begins from deep water to shallow reeds that draws in thousands of crappie anglers eager to fish and try their hand at catching a few during the spawn and for a couple weeks after.

The preferred depth on most systems is at least 3’ on the reed edges and 2’ where the nests will take shape. Reeds grow best in sandy bottom conditions, sometimes close to shore and sometimes on a sand hump out in the open. Reeds that 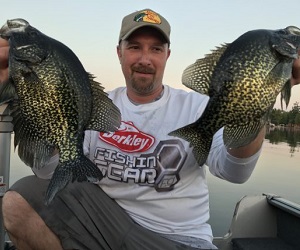 The first crappie to show up in the reeds as water temps hit mid 50’s usually males, coming in to set up the nursery in preparation for the females to stop by and drop their eggs. The females show up a couple days later and don’t stay very long, as the responsibility for keeping sunfish and other predators off the nest until the fry hatch and bail out of the area is left to the males. A single female crappie will lay between 5,000 and 60,000 eggs.

Underwater video My Wife and I Shot This Spring of Crappie on the beds – Recorded on an Aqua-Vu Micro Revolution 5.0 Pro

The fishing during this time can be stunning, but there’s a catch. Reeds are very difficult to fish in and around, and without arming one’s self with the proper gear and knowing a few tricks, can be very frustrating. Here’s some tips and tricks that will help you become proficient at putting some slabs in the net from the reed beds!

The spinning reel needs to spool and cast 6# line well. Accuracy is critical, and one usually must be a few yards away form the fish to keep them in place and get some activity from the big slabs. I like my ABU Silver Max models in a 5 or 10 size.

My choice is Berkley Trilene XL 6#. It says right on the spool it’s ‘smooth casting’, and that’s a fact. It’s supple, yet strong enough to pop a jig free of a reed without breaking, and one can hoist a 13” crappie in without a dip net if inclined to do so.

I REALLY like Berkley GULP Alive products for panfish. I don’t have to worry about keeping minnows alive, which is key. More importantly, using GULP Alive I’ll usually out fish anyone in my boat using live bait 5 to 1, for several reasons. The GULP Alive 1” minnows I usually use are tough enough to catch several fish, and that time saving alone is worth trying. I’ve also found the GULP Alive will out fish live bait most of the time anyway, and most definitely will out fish a small twister tail. I seem to do better on the watermelon or smelt color, but some days other colors do well. If the crappie is exceptionally large, I opt for GULP Alive 2” White Minnow Grubs.

I use a weighted round foam bobber. Why weighted? Accuracy, casting distance, and the ability to drop the bobber nearly on top of where the jig lands. That’s critical when the opening I’m targeting in the old reeds can be as small as a square foot.

First, fish the edge for a few casts and if nothing is going there, look in the reeds and see if there’s activity. If you can’t see the fish, watch for the telltale sandy dish shaped depressions on the bottom surrounding a reed, that means the males are there for sure. Note the depth on the transom mounted sonar for reference, back off a third of a casting distance and hit the Spot Lock on the Minn Kota.

Adjust your bobber setting to approximately ¾ of the total depth and begin picking out small openings in the reeds. The best spots have plenty of room for the presentation, and densely spaced reeds won’t hold as many.

Now comes the frustrating part for most crappie anglers.

The reeds WILL grab your jig as much as the crappie. The 6’6” medium action rod and 6-pound line come into play the second one does! When the jig hangs up, tighten the line, point the rod right at the jig, and using your wrists, drop the rod and in the same motion snap it straight up. The whipping sound created tells the story, no sound, no success! Usually the jig will break free right away, but sometimes it takes a couple snaps to get it done. Let the jig settle back in, and you are in business. The second the bobber bounces, set the hook HARD and lift the rod tip while reeling quickly. That will lift the fish out of the base of the reeds and reduce the chance the crappie will wrap around a reed and get off the hook.

There are many crappie nets on the market so it’s not hard to find one you like. Make sure the handle is not extended out too far, as the rod is only 6’.6’’ long. Most of the fish you need to net will be netted at boat side.

There can be literally hundreds of crappie in the reeds for a couple weeks, so it’s important to keep conservation in mind, and limit your catch. Try to release the really big fish after an image, that way they will be there when the crappie move out on to the edges in the late Spring to early Summer and may be even bigger next year!

Finding Upper Midwest Crappie From Ice Out to Spawn