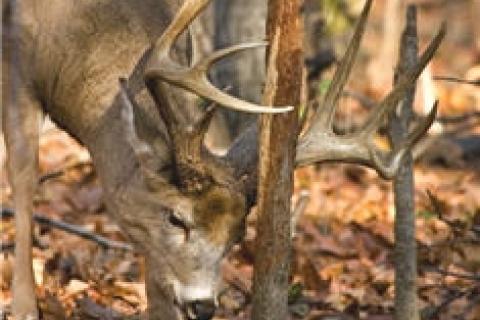 Scouting a scenic Minne­sota valley bottom, I stumbled on a series of scrapes so fresh, I smelled the dank earth before I spotted the sign itself. I quickly set up a stand for the next morning, and the buck showed at pink light, following the scrapes like a kid’s pencil tracing a dot-to-dot drawing. When he closed to 10 yards and was quartering away, I drew my bow, released the arrow...and missed.

Okay, my shooting stank. But my setup was perfect, and it illustrates just how productive scrapes can be if you hunt them at the right time.

Hunting over scrapes can be maddening throughout much of the season. Research has shown that whitetails visit them mostly at night. Also, it’s not uncommon for bucks to make one casually and never revisit. And once the peak rut begins, even the hottest scrapes can suddenly go stone cold. For a short time each fall, however, scrape hunting can be fantastic.

The key is being in the woods before the peak breeding period.

Hit it when it’s hot

Your absolute prime opportunity to hunt over this sign lasts about a week and straddles the seeking and chasing phases of the rut, starting about a week and a half before breeding crests. If you locate fresh scrapes then, the odds are very good that a buck will hit them while the sun is up. Even better, you’re almost sure to find them: Bucks open more scrapes during this roughly weeklong period than at any other time of the year. Also, with their testosterone levels rising, these boys spend more time on their feet during daylight, opening and checking scrapes and cruising for does—but still within their home ranges and along their familiar routes. Such predictability increases your chances for a successful ambush.

Don’t expect the scrapes to stay hot, though. One of the biggest reasons hunters get skunked over this sign is that they hunt it too late, when bucks have switched their focus from pawing dirt to running down does.

Finally, it’s important to understand that even during this seven-day window, some scrapes are better than others. Bucks are more likely to revisit those situated in or near security cover. Overgrown logging roads surrounded by woods are great spots, as are wooded ridgetops, riverbottoms, and evergreen stands. Also, whenever you find one scrape, look for another, and another, along a line that reveals a deer’s travel route. You’ve just found a great spot to fill your tag—assuming you shoot better than I did.

[1] Make a hot scrape hotter by dragging a rag saturated with deer urine behind you as you walk to your stand. When you get there, hang a scent wick (or your drag rag) on the licking branch.

[2] Give the scrape staying power by freshening it with doe urine before you leave.

[3] Call and rattle as you sit over a fresh scrape (see ?Your Calling Plan,? p. WH1). The maker may be bedded or traveling nearby, and the sound of other deer may coax him to investigate.

[4] Licking branches are a key part of active scrapes. Indeed, bucks sometimes work them so vigorously that they break off and deer may abandon the spot. Believe it or not, you can effectively replace the broken limb by cutting a branch from a nearby tree and wiring it above the sign.

[5] Midday scrape action can be intense, especially at those in or near security cover. If your buck doesn?t show at first light, stick around.