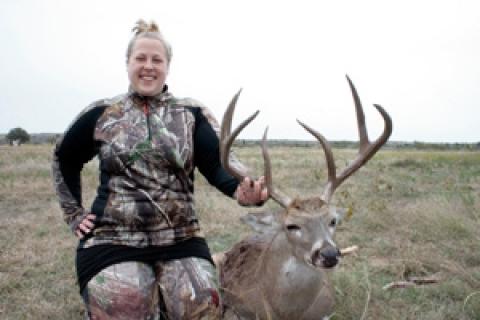 After nearly 30 years of dreaming about it, I finally got to experience my first Texas deer hunt recently, and it did not disappoint. It was everything I'd imagined and then some. If you too are dreaming of a whitetail hunt in the Lone Star State, here's what you need to know.

Texas has an estimated whitetail population of over 4 million, and while there are more whitetails in Texas than anywhere else, Texas is a huge State with a great diversity of habitat and topography. The popular deer hunting regions of Texas include the Brush Country of South Texas, the Hill Country of Central Texas, and the Rolling Plains region in Western Texas.

Most of the whitetail hunting in Texas is done on private land, and it is a big business. Sprawling ranches of up to 10,000 acres or more are common and offer deer hunts to clients from all over the world. As many of these ranches are active cattle ranches, most are fenced with at least a low fence to keep the cattle contained. These fences don't hinder the movement of deer. However, other ranches have high fences designed to keep game within its boundaries and/or keep other species or inferior genetics out. As mentioned, deer hunting is big business in Texas, and ranches spend a lot of money on deer management and understandably wish to protect their deer herds, and their investment. Accordingly, the trophy quality on high fenced ranches tends to be higher. Not surprisingly, the cost of a hunt on a high fence ranch is generally higher, sometimes considerably, than on a low fence ranch, owing to the higher costs of the intensive management and feeding programs conducted on many high fence properties.

Rather than being limited to what one particular ranch has to offer, a great option is an outfitter such as Wildlife Systems Inc., which offers hunts on a number of different high fence and low fence ranches in different areas of the State.

Something to be mindful of is that, in addition to the hunting fees, some ranches also charge a trophy fee based on the size of the rack of the buck taken by the hunter, on an upward sliding scale; the bigger the measurements of the buck's rack, the higher the trophy fee. In some cases, this fee can be very significant.

On the other hand, many of these same ranches operate intensive deer management programs that include the culling of does to keep the buck-doe ratio in balance, as well as the taking of "management" or non-trophy bucks in order to improve the overall genetics of the herd. Both of these options can provide a hunter with an excellent opportunity to experience some great deer hunting at a very reasonable price. The definition of a "management" buck on some ranches can even include some impressive deer.

When to Go Deer Hunting in Texas

Most of the deer hunting habitat in Texas is semi-arid, with water often being at a premium. Some ranches have extensive watering programs, but the amount of rainfall an area receives during critical times goes a long way toward dictating the quality of deer hunting that year, both in terms of numbers of deer and antler growth.

Watch the weather forecast and try to arrange your hunt for a year in which the area you want to hunt receives a good amount of precipitation in the late winter/early spring, as was the case this year in many areas. This should translate into abundant healthy forage, particularly for bucks during the critical antler growth period.

Deer hunting season in Texas can span from the end of September to the end of January. Many hunters believe that hunting during the rut is the most desirable, but this isn't necessarily true. Although bucks can be very responsive to exciting tactics such as antler rattling during the pre-rut/rut, they are also very unpredictable, making their movements difficult to pattern. Really, there is no bad time to hunt deer in Texas.