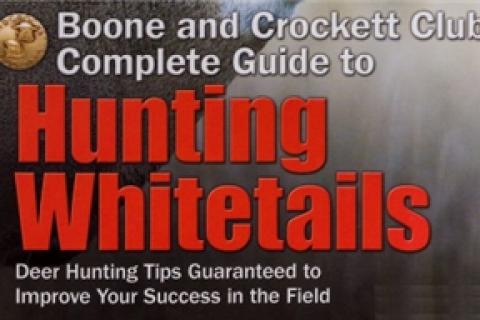 A new book titled Boone & Crockett Club’s Complete Guide to Hunting Whitetails provides deer hunters with a wealth of information not commonly found in websites, magazines and other books.

This 272-page, high-quality paperback combines data from Boone and Crockett’s record books and computer software programs with how-to strategies from deer hunting experts such as Bill Winke, Larry Weishuhn, Craig Boddington, and Gordon Whittington to provide readers with the knowledge they need to be successful.

One interesting fact revealed in the book is that 93 percent of record book bucks were taken when there was no precipitation. That indicates to me that crisp, clear weather is a great time to go after a bruiser whitetail.  Wind, on the other hand, is bad for good deer movement, we learn from this new book. Eighty-five percent of bucks in the book were killed when winds were calm or less than 5 mph.

The book also points to the best time to shoot a big buck. It’s the week of Nov. 13. That date in particular is one I almost always highlighted as the single top day for a mature whitetail when I used to write Field & Stream’s “Best Days of the Rut” feature. And the best time is between 4 and 5 p.m. It’s no coincidence that the week Boone and Crockett pinpointed is the height of the pre-rut just as it merges into the peak breeding phase for most parts of the country.

The Complete Guide contains lots of tips and tactics. For example, Craig Boddington contributes an excellent chapter on where and how to shoot deer for a clean, quick and humane kill. It’s called “The Perfect Shot.”

Plus, Dave Richards and Al Brothers have a superb chapter on aging whitetails on the hoof and detail the differences between all age classes from yearling bucks on up to 8 year olds. There are field judging tips that will help you quickly rough score a whitetail in the field before you pull the trigger so you’re not surprised when you walk up to the deer after the shot. Another chapter tells how to score the deer once you’ve harvested it.

One of the most fascinating chapters is the last one, written by Justin Spring, on whitetail statistics. There’s also a state-by-state listing of how many record book deer each state has produced and what its rank is over the last ten years. Wisconsin, not surprisingly, is number one with 756 record book animals.

Illinois, Kentucky, Iowa and Ohio are the others that round out the top five. Surprisingly to some, Texas is way down at number 11 on the list, with 225.

Gerald Almy has been a full-time outdoor writer for over 35 years, with articles published in over 200 publications. He has written hunting and fishing columns for many newspapers both in Virginia and Texas, as well as the Washington Post. He has written two books on fishing and contributed chapters to a number of hunting books. He has won many awards for his writing. In 2008, a feature he developed for Field & Stream and wrote for five years called “Best Days of the Rut,” was nominated for…
END_OF_DOCUMENT_TOKEN_TO_BE_REPLACED