After the Shot, Let It Be 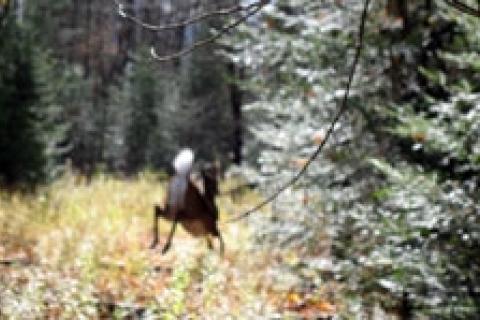 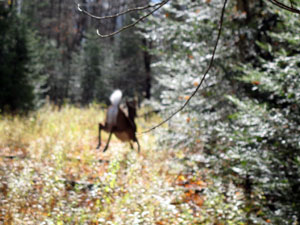 The big doe slipped out of the hardwoods just minutes before legal quitting time. From my tree stand, some 20 feet above, I watched as she stepped cautiously into the field, tested the wind and began to feed.

The range was 27 yards. It was a long shot, but I had put in a lot of time at the range, practicing frequently at even greater distances. I felt confident that upon release my arrow would hit its vitals.

And, lo and behold, it did.

I watched the lung-shot deer as it turned end for end and bolted towards the far fence line. Then, with a feeble leap, she barely cleared it and collapsed in a heap on the other side. Seconds passed and she never moved.

As far as I was concerned, that deer was dead. After all, it lay still some 80 yards away in plain sight. So less than a minute later, I lowered my bow and pack to the ground and climbed down. By the time my feet touched earth, it was nearing dark in the woods.

A flashlight beam bobbing along the edge of the hardwoods signaled my brother's arrival.

"I got a doe," I said. We then walked over to where it stood and found my arrow, bloody and half buried, in the dirt.

"She's just over there." I replied.

But when we walked to where she had fallen, the deer was not there. We had taken after her too soon and she had found enough strength to run off.
We found her the next morning, 200 yards away, stripped to hide, hooves and bone by coyotes.

It was a hard lesson to learn but, more than 25 years later, I still remember it: Never rush after the deer you just shot.

Even back then, I knew that taking to the trail too soon the wrong thing to do. Unfortunately, a combination of eagerness, excitement and inexperience caused me to ignore that sage advice.

Being wet behind the ears was my excuse. So why do hunters who ought to know better do this?
Well, for one thing, most of us are aggressive by nature. Letting game put distance between us is almost counterintuitive. Every fiber in our being wants to take chase.

And, often, we talk ourselves into believing that the shot was great, so therefore the animal must be dead. Heck, we rationalize it probably died the minute it left our sight. Most times this is true too. But you don't wait because most times it's true; you wait because sometimes it isn't.

Sometimes, the shot isn't as lethal as it first appears; sometimes the animal has more vitality than it should; sometimes, even a mortally wounded animal will bolt — and bolt a long way — in response to hearing, smelling or seeing a pursuing hunter.

I don't care how confident you are after the shot, the question you should ask yourself is, "What's the harm in waiting 20 minutes?"

The answer is none. If the animal is dead, it's not going anywhere. Let it be.

If that logical thought was at the forefront of every hunter's mind, very few mortally wounded deer would ever be lost.

Why? Because that simple wait provides time for the arrow or bullet to do its work. And, if you don't charge forward, you won't scare off a deer that is not quite ready to go down for good. As a result, that animal will probably move slower, leave a better blood trail, find a nearby place to lie down, and, hopefully, stiffen up and succumb to the wound.

There are, of course, a couple of situations where you should take after the trail quickly. If a ridiculous amount of rain or snow threatens to wipe out a blood trail, it's probably best not to wait. Or, if you can hear the nearby howling of a pack of coyotes or are hunting on very crowded public land, it's probably a good idea to get moving.

Otherwise, however, waiting can only mean good things.

Not only does it provide the aforementioned benefits, it also allows you to collect yourself, your gear and help for the tracking job ahead.

Even though you shouldn't make any moves towards the animal, that first 20 minutes or so is definitely not a time to be idle. First, you need to control your nerves, if they have gotten jittery. It is far safer to descend from a tree stand in a calm state of mind. This clear state of mind also helps once the tracking process begins.

Next, replay the shot in your mind. Make mental notes of exactly where the animal was standing, where it was hit, how it reacted, the route it ran off on and the last place you saw it. If you know these things, your tracking job is off to a good start.

Reactions can tell a lot. If the animal jumped and bucked, you might have hit it in the heart; if it hunched over and moved off with its tail tucked tight you might have gut shot it.

After waiting, go to the spot where the animal was standing when hit. Then get your tracking kit ready. This should include flagging tape or toilet paper to mark the trail, a flashlight if it's getting towards dark, your license and tag, field dressing kit and GPS or compass and firearm or bow in case another shot is needed.

If you have a GPS, mark the spot immediately. If you can gather help, do so.

If you feel your shot was good, start tracking. Remember, impatience can ruin success, so proceed slowly.

Find that first spot of blood and hair and the arrow if you are bow hunting. These will all give clues as to the nature of the hit. Bright red frothy blood is a lung shot. A heavy spray also indicates a good hit, perhaps an artery or heart. Clear fluids or greenish bile indicate that you hit the animal too far back. Wait at least three hours before tracking, possibly more. 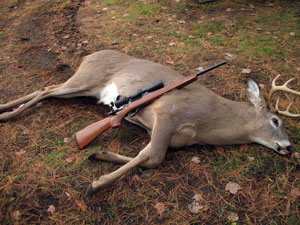 Dark spots of blood indicate a muscle hit. If you don't find blood right away go to where you saw the animal last or cast methodically in the direction of its travel until you find an encouraging sign. Don't panic if there's none immediately. Sometimes, especially on high hits or deer that have sprinted off, blood doesn't hit the ground immediately.

Once you find that initial sign, mark it and then look for the next one. Go slow; be thorough in your tracking.

Never walk on the trail. If you are by yourself, still hunt while tracking, looking not just for blood but also for the deer itself - if not mortally wounded, it might try to circle back on you. Never move too far from the last marker until you find the next sign either. Check the underside and top of leaves on low-lying shrubs, look for blood spray on tree trunks as well. If there is no blood sign close cast further and look back at all those markers you placed as sometimes this provides a direction of travel.

If you have a partner helping, he or she should stay at the last sign while you find for the next. His or her job should also be to watch all around for the deer and to mark the last blood sign with tape or toilet paper.

On a mortally wounded deer, if you have not pushed the animal, you shouldn't have to go much more than 150 yards. Sometimes that small distance takes you through some pretty ugly terrain, however, and trails get lost. If so, start a grid search, get help from others or employ a tracking dog (if legal) to find it.

In the end, if you hit it right, waited patiently before trailing, and tracked methodically, that deer will be yours.

At that point, who cares if you are 20 minutes late for dinner?