Snowy Weather Can be Great for Deer Hunting 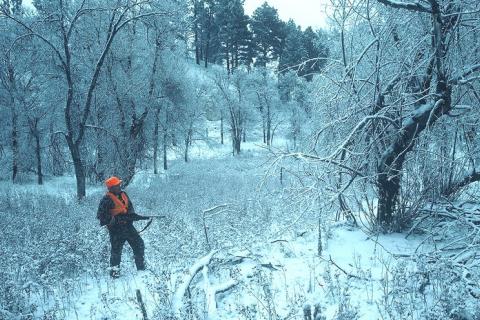 If a snowstorm blows in during the last free day you have to hunt for the season, don’t smash the alarm buzzer down and roll over. Some surprisingly good deer hunting can take place even during a heavy snowfall.

Experienced sportsmen know that hunting before a major snowstorm can be great. Deer sense it coming and will be up and moving. 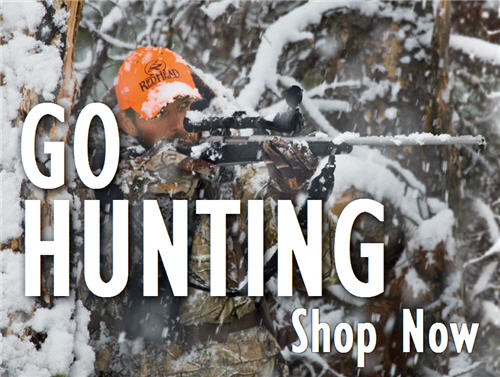 Hunting immediately after it clears out can also be excellent. In that situation deer will be hungry and getting up to feed after hunkering down during the storm.

But what if your timing isn’t quite right for those opportunities? What if you happen to have one last day to hunt when the snow is actually falling like a blanket across the landscape.

You may have scheduled this day off work a long time ago and want to be out there, whether there’s a storm or not, rather than staying cooped up in camp or at home doing chores.

Well, the truth is, you can harvest a good buck right in the middle of a snowstorm. And in some ways it’s easier than when it’s not snowing. That’s because the deer will be concentrated for you instead of scattered in different feed areas or searching for late estrous does.

1. Where to Find Snowstorm Bucks 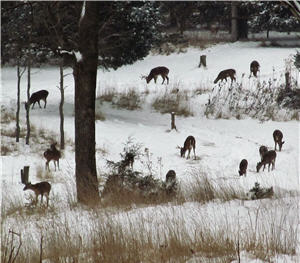 uring major snowstorms, bucks will be bedded down in a combination of these three key areas:

The remoteness factor (1) draws mature bucks because it’s now late season and they have been hunted hard for months. They want to escape the pressure from human predators and recuperate in a quiet spot after the rigors of the rut. Bucks are worn out.

Extra Tip: After breeding is finished, bucks have likely incurred a dozen or more wounds from fighting and lost 20-25 percent of their body weight compared to late summer.

Extra Tip: Since deer are concentrated in pines and other evergreens, you can sometimes push out large numbers from a single thicket.

This worn-out condition and the pressure from months of hunting send them back to their core home areas (2). That’s where they feel most comfortable and they can bed down and recuperate once the major rut is finished.

Finally, besides seeking remote locations that encompass their core home area, bucks also typically hunker down in conifers during heavy snowfalls (3). That type of vegetation offers them both security cover and thermal protection by blocking winds and some of the snowfall.

Extra Tip: If possible, when searching for late season bucks in a snowstorm, try to find a spot that also has some secondary food sources nearby such as honeysuckle, crabapple, blackberry, grapes, greenbrier, persimmons, American beautyberry, strawberry bush, and forbs. If the storm lasts more than a day they may move slightly and browse on those tidbits

2. The Most Essential Ingredient for Late Season Deer Hunt

Whether there is extra secondary food or not, finding evergreens is almost essential for collecting a late season whitetail during a snowstorm. The dense branches of these trees and their needles provide protection from the snow, break the wind, and if thick enough, offer temperatures several degrees warmer than surrounding open hardwoods.

Extra Tip: The species of conifer depends on where you hunt. Cedars, pine, spruce, hemlock, fir--all offer thermal refuge and attract bucks in a snowstorm.

Both topographic maps and aerial photographs such as those on Google Earth will help you locate these potential storm hotspots. You may already know where most of them lie on your property from previous hunts and scouting.

It doesn’t hurt to confirm deer are using the area by finding sign, but you really don’t need to. As long as you’re in a good area with some mature bucks, they will usually pile into these conifer sanctuaries--often before the snow starts.

Extra Tip: Because of this, there may or may not be any tracks in the snow leading to these conifer hideouts. Simply assume they hold a good buck and hunt accordingly.

Tactics for ambushing a snowstorm buck can be narrowed down to one approach.

Stand hunting is out. The deer are not moving.

Still hunting is also usually a poor choice because the cover we’re talking about is jungle-thick and impossible to sneak through quietly and unobtrusively.
One option is left: quick-strike, surgically-executed drives.

Extra Tip: Depending on the size and density of the thicket anywhere from 3-5 hunters can be used for the snowstorm drives.

Study the terrain and cover, and then post hunters at the most likely exit points. These include strips of brush or fingers of vegetation jutting out from the main cover. Deer love to follow these as they try to flee.

Also cover ditches, draws, and hollows with thick shrubs and weeds. If you have enough people, leave a posted hunter at both the end and starting-point of the drive.

Extra Tip: Also place one hunter at the next nearby patch of evergreen cover. That’s where any bucks that escape will likely head for.

You can either drive into the wind or cross-wind, but walk silently. Bucks are wary in the late season. You don’t need to do any whooping and hollering.

Extra Tip: Use a crow or owl call if you need to keep in contact with your fellow hunters in the super-thick cover to make sure you’re moving at the same pace.

Have everyone know their safe shooting lanes and make sure each hunter wears lots of blaze orange.

Gerald Almy has been a full-time outdoor writer for over 35 years, with articles published in over 200 publications. He has written hunting and fishing columns for many newspapers both in Virginia and Texas, as well as the Washington Post. He has written two books on fishing and contributed chapters to a number of hunting books. He has won many awards for his writing. In 2008, a feature he developed for Field & Stream and wrote for five years called “Best Days of the Rut,” was nominated for…
END_OF_DOCUMENT_TOKEN_TO_BE_REPLACED