8 Clues Deer Droppings Can Tell You 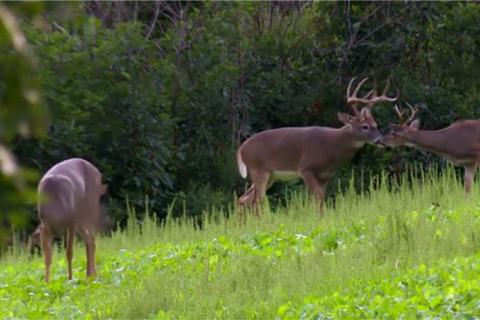 Experienced hunters are sometimes dismissive of deer pellets as valuable sign. "I thought only novices got excited about finding droppings," a hunting partner once said when I bent down to examine a fresh pile.

But the experts may be dismissing this sign too hastily. Deer droppings can actually reveal lots of practical insights that can help you waylay a trophy buck.

Some of the things you can learn are the approximate size of the deer; when it was there; what it was probably doing; where it was going; and what it was eating. How fresh it is, size, consistency and its location are the four keys to pay attention to.

Wet-looking, shiny droppings have high moisture content and were likely made within the last 6-12 hours. This is smoking-hot sign. Hunt near here immediately or within the next day.

Dull, dried-out scat is a day or more old. If the pellets are hard, shrunken and lightening in color, they're even older. The deer that made them probably isn't using that area anymore. Move to a different spot.

If it's before or after the rut, concentrate on large piles. During the rut, set up near the doe droppings. Mature bucks will be shadowing the ladies then. Staying close to them is your best tactical bet.

Firm pellets suggest a buck was eating twigs and bushes. Search for clear cuts growing back, logged areas with tops on the ground, and transition corridors between bedding and feeding cover with sapling growth and bushes.

Soft pellets mean the deer was eating some browse like twigs and bushes, but also some clover, alfalfa or forbs in fields. Search for more sign and trails from the droppings leading to the nearest open feed areas with crops or weed growth.

Loose droppings indicate a deer was likely eating fruit or alfalfa. Search for this crop, nearby orchards or scattered fruit trees such as pears, apples, persimmons, crabapples and plums. Set up near the hottest sign where it enters the orchard or approaches the stray fruit trees.

Locating fresh droppings near heavy cover means you're probably close to the buck's bedding site. You're likely on a trail he uses or at least a transition corridor from daytime hangout to major feed areas.

Back off from the scat toward the nearest major food source. Hang a treestand along that route for an afternoon hunt as he leaves the bed or very early morning hunt as he comes back from a night's feeding.

If the droppings are in an open area it's likely a feeding spot and best for a very late afternoon hunt. Study your topo or aerial photo and back off to the nearest transition corridor funneling in from heavy bedding cover.

This area will likely have low bushes, cedars, saplings, tall grasses, greenbrier and honeysuckle present. Set up along this travel corridor as it approaches the feeding area where you found the droppings.

That way you'll be more likely to spot your quarry before dark. If you set up right near the droppings the buck might not arrive in daylight.

Gerald Almy has been a full-time outdoor writer for over 35 years, with articles published in over 200 publications. He has written hunting and fishing columns for many newspapers both in Virginia and Texas, as well as the Washington Post. He has written two books on fishing and contributed chapters to a number of hunting books. He has won many awards for his writing. In 2008, a feature he developed for Field & Stream and wrote for five years called “Best Days of the Rut,” was nominated for…
END_OF_DOCUMENT_TOKEN_TO_BE_REPLACED