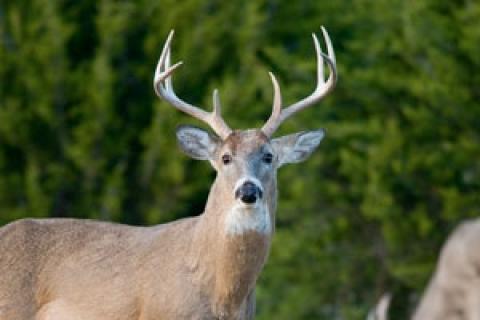 You hear hooves in the leaves. Where is he? There! There he is! A buck is ghosting in. Is he the one in the trail camera photos? Is he big enough to book? Does he meet the management standards for this property? Is the antler score enough for the outfitter with whom you are hunting? Lots of questions, and you better answer them fast because he's steadily marching toward your narrow shooting window.

If you're a hunter who's serious about putting a deer in the record book, part of your training must be to learn exactly what net 125-inch bucks and 170-inch bucks look like. As "Mr. Whitetail" Larry Weishuhn suggests, you may have even made flashcards from photos of mounted heads to memorize the size of various racks. But most of us are just trying to make sure we don't offend a host on whose property we're hunting or incur a "penalty" fee for shooting a buck smaller than the minimum.

Often, when a buck's in view, you have only seconds to make your assessment of its antlers. You need a system that's fast. Here's the fastest.

TIP: Before hunting, ask your host or outfitter what the average "frame size" is for mature bucks in that area. If they are practicing quality deer management, they'll know. What you're looking for is a base number encompassing the length and mass of main beams and the average spread.

Weishuhn says, if you're hunting unmanaged property but still want to use this method, consider average body size of mature bucks in that region. If bucks of 4 1/2 to 6 1/2 years range around the 200-pound mark, then assume a base frame of 90 inches. If the adult bucks are in the 125- to 150-pound range, use a base of 80. If you're in prairie Canada where bucks can legitimately weigh 300 pounds, then frame base may be as high as 100. With that knowledge all you need to do is add the length of each antler tine to the base to provide a good estimate of gross antler score.

The key is knowing you're looking at a "mature" buck. Aging deer on the hoof is another important management skill in itself, but when it comes to antler size, it's often a "you'll know it when you see it" proposition. Immature bucks usually wear thin horns and basket racks. On the other end, when a buck is in the 160s and up, your biggest challenge will be screwing your eyeballs back into their sockets to take the shot!

The Base Frame System for Quick Scoring of Whitetail Deer

The tough ones are in the middle at 130-150 inches, and this is where the base frame system is worth knowing. Say you're hunting western Kentucky along the Ohio River. This is a region, just like Illinois on the river's western bank, known for big deer. Bucks of 200 pounds aren't uncommon, so the frame base number is 90. A buck shows up in front of your stand. He's an 8-point, but from his filled out neck and brisket, slightly swayed back, blunted nose, and swagger you can tell he's at least four and maybe five.

For this graphic to quickly score white-tailed deer, A = tines, B = Tines and C = Tines. Beam Length is the measurement from the bottom of the burr to the tip of main beam. 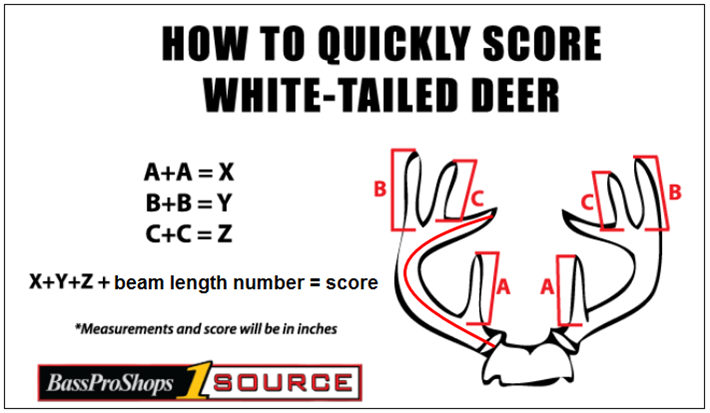 To judge tine length, you need perspective. The whitetail's ear is 6 1/2 inches long. The eye is 2 inches from preorbital gland to the back of the socket. From the front of the antler base to the tip of the nose is about 10 inches.

And one more tip...all of this analysis is best done as "close up" as possible with good binoculars or even a spotting scope. The magnification of quality optics allows analysis at a distance so you can make your shoot/no shoot decision well before the buck's in range.

* Books and videos are available on how to estimate deer scores and age animals through the Quality Deer Management Association. Also visit taxidermy shops and rough score deer on display in your head. Then find out what the animal actually scored and see how close you were

Are You Missing Out on Important Ways to Use Your Rangefinder?

12 Tips to Recovering Every Deer You Shoot

Bowhunting Pronghorn: Tips on Taking and Making the Shot

How to Adjust Diopter Settings on Your Binoculars (infographic)

Since age 11, Bill Miller knew he wanted to experience outdoor adventures and share them with others. He wanted to be an outdoor writer. In the decades since, he has lived and continues living his dream.