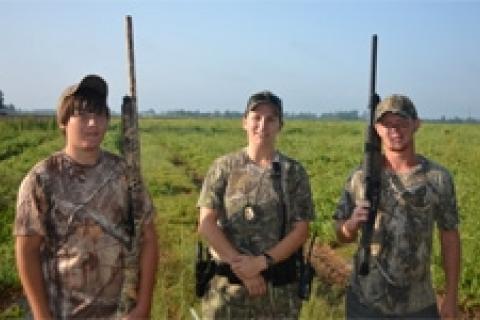 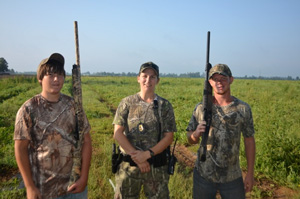 Intensive agricultural practices, which include tens of thousands of acres of corn, melons, milo, soybeans, wheat, popcorn and rice, make Southeast Missouri the Mecca of dove hunting activity in the Show Me State.

Vast numbers of dove hunters make the annual pilgrimage to this magical land called the "Bootheel" of Missouri. This sprawling Mississippi River delta region boasts some of the most fertile farm lands in the world. Doves thrive on the abundance of grains and annual weed seeds found there.

My wife, Dian and I traveled to Gobler, Mo., to spend opening day with Josh Driskill of Dirty Rice Outfitters. As we broke out of the hills below Cape Girardeau and entered the lowlands, we immediately began seeing doves on power lines and in crop fields.

Very few crops had been harvested. If you are fortunate enough to hunt one of the few harvested grain fields, you are in for a superb dove shoot. The limited number of harvested fields serves to concentrate doves in massive numbers.

The further south we traveled on I-55, the more doves we spotted. We turned west from Hayti and headed towards Kennett. More cut corn fields added promise to the potion. Irrigation pivots watered cotton and soybean fields, adding pockets of surface water to the mixture.

We turned back south, before reaching Kennett, and soon arrived at the small community of Gobler, famous for ghost sightings. The numbers of doves we spotted in the area were not apparitions, however.

Josh Driskill, Colton Bryant and Jake Dogan greeted us we arrived at the Dirty Rice Outfitters lodge. We quickly settled into the plush accommodations and planned our hunt for the next morning. Four a.m. arrived quickly.

After a short drive into Dunklin County, our party set up on open spots in a watermelon field, strategically placed a half dozen Lucky Duck Flasher Spinning Wing Decoys and waited for shooting hours. Doves immediately began to dive in on the spinners and the shoot began. Action in the watermelon field stayed steady, but the gunning on a cut corn field south of us produced a constant roar of shotgun fire for well over an hour.

We traveled to Mississippi County, near East Prairie, to join Riley Colson, for the second morning. We hunted another huge watermelon field. Approximately 40 hunters scattered across the massive field. Shots rang out as soon as shooting hours arrived.

Doves darted and careened across the foggy field, making for a challenging shoot as doves suddenly appeared from the gray fog. The Winchester 12-gauge Game and Target loads I used proved effective. I dusted the first dove with a 2-3/4-inch load of 1 and 1/8 ounces of number 7-1/2 shot. The 1-1/8 ounces of shot is far superior to the lighter 7/8 or 1 ounce loads.

Conservation agent Christa Cox showed up to check licenses, guns for plugs and legal limits. She noted that the dove population seemed substantial and that most hunters were doing well.

Dove hunting proved spotty, with the most success coming from cut corn fields. Driskill, Colson and agent Cox all agreed that the best dove hunting was yet to come as more northern doves arrive and more fields are cut over the next few weeks.