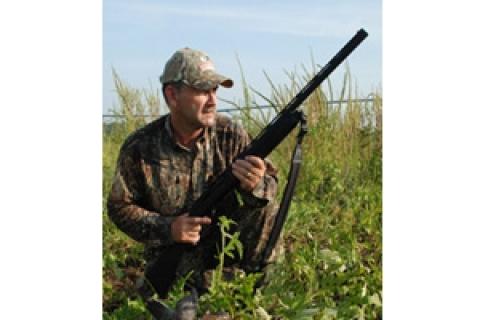 Dove hunting in the Missouri Bootheel is centered around agriculture. Vast fields of corn, soybeans, milo, rice and wheat provide plentiful food supplies both from waste grain and annual weed seeds which grow in the crops. Corn is normally harvested prior to the September 1 dove opener, creating tens of thousands of acres of fresh food supplies. However, when crops are harvested late, usually due to wet spring weather, dove hunters have to hunt alternative food sources, including watermelon fields.

When Plan A Fails, Try B-Z

I learned a valuable lesson about dove hunting a decade ago while planning a trip to my hometown of East Prairie, Mo., in hopes of finding the usual outstanding dove hunting opportunities. My heart sank after making a phone call just before leaving home. The individual on the other end of the line said, "Bill, you just as well stay home. There are no crops cut yet and the doves are not here. Crops are very late due to all the heavy flooding last spring."

From past experience, I knew hunting could be tough. I'd have to find some alternatives.

I began calling a few farmer relatives in the East Prairie area. All indicated that they had not begun cutting crops. However, one did recommend that I call an old high school buddy who had a 40-acre watermelon patch.

I hastily made the call and quickly received an OK to hunt. Our hunting trio arrived at the farm 10 minutes later. Doves flitted about everywhere. We scouted the filed for a few minutes and laid our plans for the opening day shoot.

After setting up housekeeping in our respective spots, we adjusted our gear and began the wait. Soon, shots began to ring out from a farm about a mile away. Heavy shooting continued for well over an hour. We had yet to fire our first shots. We discovered that the watermelon field was a better mid-morning and late afternoon draw to the doves. Had we been able to scout both morning and evening, we would have discovered that fact.

Doves will enter fields to feed at several major points, called travel corridors. They may consist of land features such as a ridge higher than the surrounding area, a drainage ditch, woodline or dead trees on the edge of a field. Man made structures such as electric lines and irrigation pivots may also serve as travel corridors.

How to Hunt in Them

All spots are not created equal inside the perimeter of a watermelon field. Doves will naturally favor some areas over others. Finding those hot spots will fine tune your hunt and increase your shooting opportunities. Look for the following:

Melon fields attract doves regularly and do not have to be an alternate hunting spot. Besides, where else can you shoot doves and eat watermelon at the same time?

Tagged under
How To Guide
Hunting Tips
Read 5,452 times