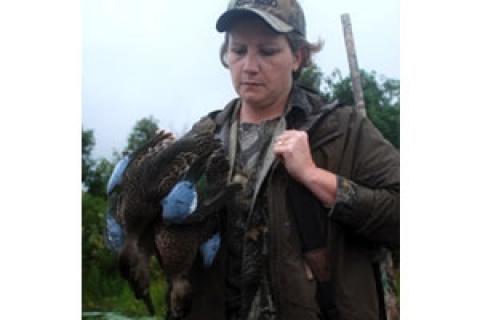 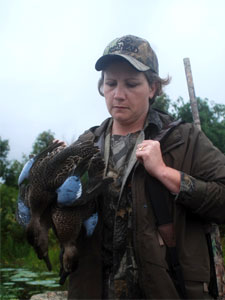 Blue-winged teal are very early migrators. One avid waterfowl hunter, Diamond Dunn of Corning, Arkansas, has said he's seen them in his area as early as the first week of August.

A cold snap up north sends teal fleeing southward. Some years they skip right on through Missouri and Arkansas on their journey. A mild spell, however, will hold them in place for a while.

Over 2 million green-winged teal are harvested each year, making them the most popular waterfowl species, second only to mallards. Combined, cinnamon teal and blue-winged teal account for another 850,000 birds harvested.

With an exciting season anticipated this fall, hunters should keep in mind these three tips to insure success.

If you are hunting in the perfect blue-winged teal habitat, duck decoys are not necessary. The birds will flock in to feed on shallow water area. Most of us do not have access to perfect habitats, where no other hunters visit.

Keep it simple is a good rule to remember. A dozen decoys will attract teal. A mixture of blue-winged decoys, with the tell tale blue wing patches and white cheek spots, and a few drab mallard hen dekes will do the job. September teal are in their drab color stage and will readily decoy to this set.

Divide the dekes into two sets with a hole in the middle. Most decoying teal will head to the hole, so center it on your shooting position.

Many experienced teal hunters believe that duck calling is not necessary. However, any wild creature recognizes the sounds of its kind. Teal are no different. A rapid series of 4 to 5 short notes on a teal whistle helps to get their attention. Blow several loud peep, peep, peeps to initially let them know where your decoys are located. Go soft as they approach and silent once they commit.

Stay as still as possible, because they will pick you out if they see your hands moving while you are operating a call. Teal do emit a high pitched quack, which can be duplicated with a mallard call. Combine a teal whistle and a mallard call for the greatest calling effect.

3. Practice for the Shot

Teal are tough targets. Hitting them consistently takes some practice. One of the most common mistakes is shooting behind them. Pick out a single bird and concentrate on its head and beak — your intended target. Pull the trigger just as you swing by the tip of the beak.

Teal are tough birds and surprisingly difficult to kill. Number 6 teel shot is good medicine for teal. Use 2 3/4-inch or 3-inch shot shells, depending on the distance you expect to shoot. The #6 shot will have approximately 300 pellets in the shell.

Steel shot tends to pattern tighter than lead, so an open gun choke is necessary. An improved cylinder is good to 35- to 40-yards. Modified chokes are an option, as well.

It's going to be an exciting early teal season with plenty of opportunities for hunts, as many states have gone to a 6 bird limit per day with an 18 bird possession limit. Sharpen your shooting skills, pack some iced tea and mosquito repellant and head out on opening day.