The Elk That Almost Broke Us 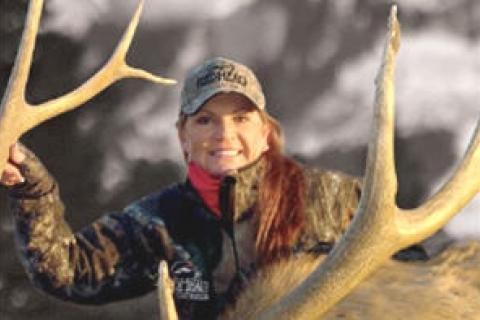 Drawing an elk tag for the White Mountains of eastern Arizona is no easy task, and hunting the White Mountains is dang near impossible. Our destination was an area that locals call "The Blue", near Alpine, Arizona, very close to the New Mexico border. The hunt in November 2002 was one of the most challenging hunts of my life—one in which we actually feared for our lives. 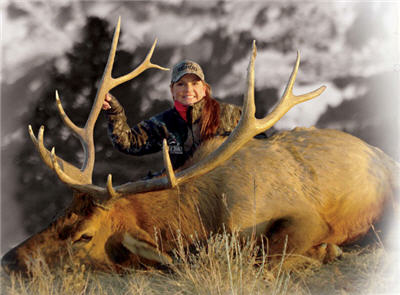 Our hunting party included videographer Ken Langguth, myself, and a guide. When we reached base camp, a couple of groups of hunters from back east were already there. Surprisingly, they were packing up to leave—they said the hunting was just too tough. Drawing an AZ elk tag was tough too, and we absolutely weren't going to give up before we even started. We set up camp, and began the hunt.

Rugged is an insufficient word for this terrain. For days, we struggled up and down the jagged mountainsides, with never a moment of relief. Ken's large video equipment had him weighed down like a pack mule—I'm still amazed at his tenacity.

By mid afternoon several days into the hunt, we had crawled and sidled and climbed up to the top of a ridge. Finally, I spotted a big bull feeding on a the side of the mountain across a ravine that was more like an abyss—because we couldn't see the bottom. The camera was rolling, and I took careful aim and fired. The elk humped, took a couple of steps, I fired again, and he disappeared. We hoped that he had fallen in place, but due to the dense scrub brush we couldn't tell from where we were. We had to cross the ravine. We scrambled, slid, and pulled ourselves through deadly switchbacks, sharp outcroppings, loose rock, and clawing underbrush for hours—going in the general direction of where we thought the elk fell. It was midnight before we reached the spot where the elk had vanished.

To top off that nearly impossible journey, our flashlights had given up the ghost. The only working light we had among us was Ken's green Streamlight. We were literally feeling around on the ground for the elk with a little assistance from the green beam, and the guide finally found the elk. It was hung in a precarious position on some scrub brush, over the edge of a steep rock face. He decided to climb down and tie the big beast off to a tree—actually it was just a bush with roots stubbornly growing out of a crevice in the stones—and as he was doing so, the brush gave way! Straddling the elk's body, our guide slid down into the rocky, deadly darkness, to a fate unknown.

When the clattering of rubble and the echoes of his frightful descent subsided, we could hear him moaning at an undetermined distance below. "Don't come down," he called out. "You'll cause a landslide."

After a little bit of figuring, I decided that Ken and I should move down the ridge a ways and try to descend to the guide's level. We really had no choice—our first priority had become finding him and getting him to safety if he was injured. And of course, I was extremely anxious to tag and field dress my first AZ elk. We moved about 100 yards down the rib of the mountain, I shouldered my rifle and backpack, took one step and began the sliding freefall to the bottom of the canyon. The quiet darkness was interrupted only by the crashing of boulders as I bounced from one to another. I heard my clothes ripping, glass shattering and felt the air being knocked from body as I tumbled down like a ragdoll.

When I finally reached bottom, I felt like I had been thrown into an industrial drier with a stack of bricks. I had stopped against a boulder after rolling down the brutal slope in a ball. After gathering my wits a bit and discovering I really wasn't dead I systematically moved every limb and checked for any major injuries or blood loss. Unbelievably, I was intact with the exception of lots of skin, but no broken bones—which is amazing, since my rifle stock had been broken in half at the grip and all the glass in the scope was shattered. That very well could have been my head, leg or arm.

Ken called down "Are you alive?" I managed a moaning response in the affirmative, and then I could hear him mumbling something in the dark—very strange, like he was talking to someone. I didn't have time to worry about that too much, though—I just hoped he would remember to go further along the backbone of the mountain to try his descent, because if he followed behind me it would surely cause a landslide and I would be buried alive in boulders. He did move down, and wrapping himself around the expensive camera equipment, he began the dangerous tumble to the bottom.

His descent sent rocks and dirt flying in all directions but in the dark I merely covered my head with my arms and lay aching by the Volkswagen-sized boulder I had landed against. When all was quiet once again I called my trusty videographer's name, fearful that he hadn't been as lucky as I on the fast trip down the mountain. Amazingly, Ken was also bruised and skinned but suffered no serious injuries.

We were at the base of a narrow rugged drainage that was littered with huge chunks of granite that had slipped off the sharp mountain faces over the eons. Walking was impossible. We were 3 people and a dead elk separated by pools of water, dead logs, and rocks the size of refrigerators. We were all essentially unharmed—if looking like you had just gone 10 rounds with Mike Tyson could be counted as unharmed. Somehow we stumbled and crawled our way to the fine 6x6 and began to field dress the bull by the faint glow of the Streamlight. Although it was mid-November and very cold in the mountains we propped open the body with sticks to cool, then began to make our way back to camp.

It was well after daylight, and we had been out for over 24-hours when we came staggering in, bruised and battered. After several cups of strong coffee we gathered ropes, pack-frames and a horse to retrieve the precious elk meat before predators could steal it from us. The last mile up the drainage was too precarious to risk injuring the horse, so we quartered the elk and carried it and the rack out of the hell-hole on our backs before transporting it to the panniers on the horse for the last leg to camp. We had somehow soldiered through, suffering the rigors of a tough hunt that was multiplied by unforeseen conditions—and we had done so successfully, with a beautiful trophy Arizona elk to show for it. That bull now hangs in my living room, and remembering the traumatic experience everyone went through that night on the mountain makes him even more special.

Later, I asked Ken who he had been talking to when he was left alone up on that dark, barren ridge—and he said he had been dictating his last will and testament into the camera's microphone. He reasoned that even if he was never found, they'd surely come looking for the expensive video equipment, and there would at least be some record of what had happened to us on that fateful night. But thanks to good instincts and perseverance, we survived to tell the tale.

Getting Your Ground Blind Ready for Turkey Hunting

Elk Calling: What You Need to Know Before You're in Elk Country (infographic)

Do You Speak Elk? (Audio Quiz)