Impact of Climate Change on Fishing 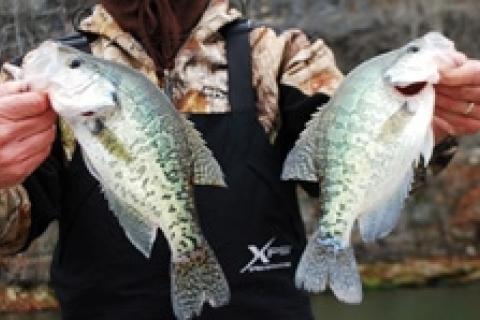 The ice caps are melting, the seas are rising and species are adapting and moving into new habitats. The warming world climate is having many consequences, including a change in the size of aquatic organisms.

The study of the effects of world climate change is not new science. One of the most well known symptoms is the shifting of organisms either north or south of the equator. Only a few years ago, the Science Daily reported that not only are the habitats changed but the size of organisms is affected as well.

Dr. Martin Daufresne of the HYAX Lake Ecosystem Laboratory in Aix-en-Provence, France has shown that global warming leads to reduced body size of organisms in the ocean and in freshwater. A variety of organisms showed this tendency: bacteria, plankton-algae, zooplankton and fishes in the North and Baltic Sea and in French rivers.

Three mechanisms seem to play a role in this process:

“This development affects the functioning of the whole eco-system: The body size is decisive for what animals can eat and by whom they are eaten. A shift to smaller species and individuals within the fish population could lead to a reduction of zooplankton because small fish will eat less fish and more zooplankton. This could pave the way for massive and unpleasant algal blooms. Furthermore, with smaller fish the economic value of fishery declines,” explained Prof. Sommer of Kiev.

Thousands of such reports now exist. They all point to the fact that the environment will deteriorate as global temperatures climb and many fisheries will be drastically affected.

Fish are cold blooded creatures and seek water temperatures which best suit their biological needs. As water temperatures warm, cold water species will suffer first. Anglers are already finding that some of their favorite  cold water fisheries are supporting fewer trout, salmon and walleye. Species which tolerate warmer waters are beginning to replace them.

One thing is certain. Favorite fishing holes will not remain the same. As temperatures gradually climb, lake and rivers will experience a change in species composition. Water levels may decline increasing stress on fish populations and lessening chances for angler access.

The Freshwater Fish Fact Sheet indicates that a nationwide analysis of the effects of warmer air temperature estimates that 5-17 percent of existing trout and salmon habitat could be lost by 2030, rising to 21 percent to 42 percent by 2090. Although substantial losses are expected throughout all regions of North America, losses in the South, Southwest and Northeast could be particularly severe.

Most vulnerable are fish populations at the limits of their ranges, such as salmon in California and bull trout in the high-mountain areas of the West. Modeling an increase of 5.4 degrees Fahrenheit in July air temperature predicts losses of stream habitat ranging up to 24 percent for Bonneville cutthroat trout and 38 percent for westslope cutthroat trout. Scientists estimate that up to 90 percent of the wild brook trout in the Appalachians could be lost due to climate change.

The report goes on to say that scientists don’t know how climate change will affect every aspect of the fishing experience, but they do know that anglers should count on change. In many lakes and rivers, water levels will suffer from higher evaporation rates, lower spring and early summer snow-melt and prolonged drought, making boat access more challenging.

Trout and salmon will disappear from many streams and rivers that today hold viable populations, severely diminishing opportunities to catch those species. Moreover, fishery managers likely will be forced to reduce daily bag limits to better protect adult fish. As more frequent droughts heighten competition for water resources among all users, both fisheries managers and fishermen may need to get more involved in efforts to protect instream flows. Depending on where anglers live and practice their sport, they may need to change their target fish from cold-water species to more resilient warm- water species or be prepared to travel longer distances to pursue their cold-water favorites.

Anglers in the Midwest are experiencing changes in cold water fisheries and some have noticed changes in the habits of warm water species as well.

Dale Goff is a well known crappie fisherman from central Missouri. He often fishes the Lake of the Ozarks, known as a crappie producing machine. “It is unbelievable how many crappie there are in in LOZ,” he said. “Year after year the numbers keep coming. this lake is phenomenal.”

LOZ is not a particularly fertile lake, but for some reason it has consistent shad spawns year in and year out, according to Missouri

Department of Conservation fisheries biologist Greg Stoner. The shad grow slowly, which makes them available longer as a food source for crappie.

“It is not uncommon to see huge balls of shad on the lake surface,” Goff continued. “Both crappie and bass rely on the shad as  a major food source.”

Even though fish numbers are still good at LOZ, Goff has noticed a definite change in crappie behavior. “By December crappie have always moved to deeper water. In the last couple of years I have noticed that crappie are staying shallower longer.”

Goff turned his boat towards a laydown which ran from the bank to about 15 feet of water. I know him well enough to know that he usually heads to deep brush piles in the winter months.

Goff immediately began catching crappie on a Lucky Strike jig with a curly tail. I had trouble hooking up. Goff soon told me I was letting the jig fall to far before beginning my retrieve.  He instructed me that a three count was plenty.

I made the change and soon began catching crappie.

“We are catching fish at five feet,” I commented. “Yep, I have been doing this for three weeks. I have never seen it like this, with the warmer water and crappie being so shallow. Something has changed and we are going to adapt our fishing techniques to be successful.”

I watched a fisherman a couple of hundred yards away working a brush pile in deeper water. He never boated a fish all morning. I figured he had not recognized the effects of global warming on crappie fishing.