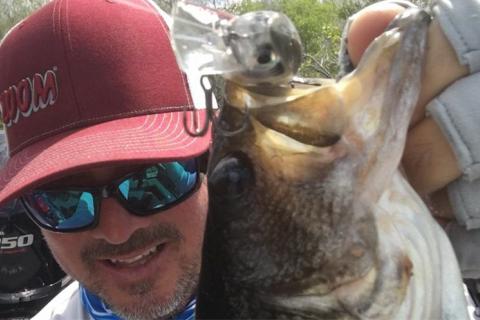 Bassmaster Elite fishing pro Randall Tharp uses a square bill crankbait to catch bass year round.  From Lake Okeechobee to Lake Champlain, for largemouth and smallmouth, the Florida pro relies on a squarebill’s versatility to cover water and put a limit of bass in the boat as well as catch big ones. Here he explains where and how to fish a squarebill crankbait for bass in the fall.

As air temperature drops in the fall, shallow water at the back of creeks cools off quickly. This attracts baitfish from the main lake.

“They’re seeking out the cooler water in the fall, so the bait moves back there and in return all the things that bass like to eat move back there,” Tharp said. “It happens every year and it happens all over the country.” 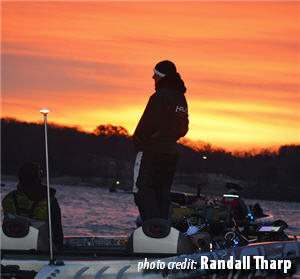 As bass migrate into creeks they set-up around different types of shallow cover. The result is a fishing scenario perfectly suited for cranking a square bill.

“Bridges, cause ways, logs, docks, anything on the route from the main lake to the back of the creek, is something I would target with a square bill crankbait,” Tharp said.

Bump and Bang Your Way to Bass

Tharp uses a square bill bait to cover water, but does so strategically. He makes targeted casts and retrieves the lure so it bumps into stumps, rocks, a dock post, a lay down - you get the idea.

“I cannot think of a time where I don’t want it to be hitting the bottom or hitting the cover that I’m fishing,” Tharp said. “You’ll catch some fish just winding it through the water and not hitting anything, but I would say the majority of fish you catch on a square bill crankbait are going to be when that thing is hung-up, deflects, and is doing something erratic, and that’s the whole key to fishing that bait.”

Extra Tip: When it’s 60F degrees or higher, Tharp uses a medium to fast retrieve. Cooler than 60F and he’s going to start slowing it down.

Randall Tharp has boxes of square bill crankbaits in his boat, but odds are good that if you cross his path this fall he’ll be throwing one of the new Rapala BX Brats crankbaits. Here’s why.

The BX Brat features a balsa core with a plastic outer shell. It’s no secret bass pros love balsa cranks because the buoyancy and irregular properties of wood can give certain baits a unique action. One downsize to balsa, though, is it can be fragile - and square bills get beat up from constantly crashing into cover.

Rapala’s solution to this problem was simple. They wrapped the Brat’s balsa body in a copolymer shell for added toughness, not to mention extra weight for longer casts.

“You get the subtleties that a balsa bait gives you, but you get the durability of a hard plastic bait,” Tharp said.
Another key feature is the Brat’s bill makes a slight “V” at the bottom. Tharp calls it “a modified square bill” and it gives the Brat three points, instead of just two, to deflect off of cover.

Extra Tip: While BX Brats fish great out of the box, Tharp upsizes the rear VMC treble hook one size on both models. The bigger hook puts more weight in the rear of the bait, which improves casting distance and accuracy.

Tharp fishes the Rapala BX Brats crankbaits and other square bills using a 7-foot composite cranking rod with a 6.8:1 casting reel like the Lew's Super Duty Baitcast Reel. The medium speed reels gives him the flexibility to speed up or slow down the retrieve based on the conditions and bass mood.

Fourteen-pound fluorocarbon fishing line is his starting point for line, but he adjusts line strength (i.e., diameter) to fine-tune running depth so the lure bumps along bottom and into cover. For instance, 10-pound fluoro makes a BX Brat run a foot or so deeper, while thicker 20-pound cuts a foot or two off its running depth.

Extra Tip: Tharp’s square bill rod is always on the deck of his boat. Even when it’s not his primary pattern, he finds he frequently passes water perfect for a squarebill.

While cooler water in creeks sets-up a reliable square bill crankbait bite for bass in the fall, these versatile hard-baits should be in your boat year round. Tie one on, start crashing it into cover, and get ready to set the hook.