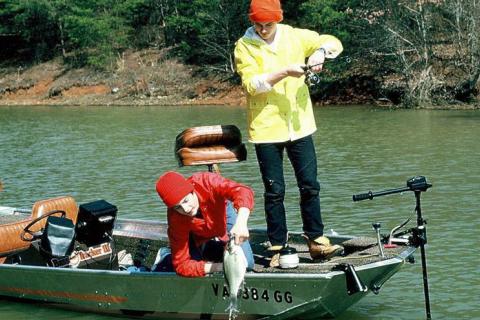 Rare is the fishermen who focuses on one species alone to the exclusion of all others. Some anglers even add excitement to their day by trying for several fish species during a single outing on the water. To help with the goal of catching a variety of gamefish, here are 15 tips, focused specifically on the challenges of early season fishing.

Try these tactics for your favorite gamefish as winter transitions into spring. At no other time are fish as hungry as they are now. Adding icing to the cake, early spring is perhaps the best time of year possible for catching a trophy-sized specimen.

Panfish: The Small Catch That Will Fit in a Frying Pan

Tip: Yellow perch are great fish for early season outings, since they bite well when water temperatures are only in the 40’s and 50’s.

The best offerings are either small crayfish or live minnows. You can use split shot for weight or rig dropper hooks tied off 12 and 24 inches above a 1-2 ounce bell sinker. Concentrate on rocky points, bars, humps, and channel edges in lakes, deep pools and backwater eddies in rivers.

Common types of panfish species are:

Northern Pike: Spring Pike Fishing is as Good as it Gets 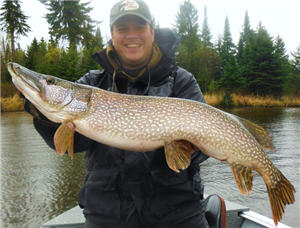 Tip: Pike also called Pickerels, and Muskie are often thought of as a fish of shallow, weedy water. But early in the season you’ll find them in deep areas, often along dropoffs and points that jut out into the main lake or river channel. That’s where they school up before heading into thin water to spawn. This water can be as deep as 20 or 30 feet.

A minnow or jig tipped with a plastic trailer is an excellent offering in this situation. You can also use a heavy spoon such as the Dardevle, casting it out and letting it sink near the bottom before pumping it back with an erratic, fluttering retrieve.

The Pike famiy are relatively aggressive species, more so with regards to feeding. Fishing from shore is very effective during spring when they move into the shallow water to spawn in areas with many weeds. Pike will remain feeding in the shallows for a while longer to regain their strength after spawning.

Tip: Working fishing lures straight up and down under the boat is one of the top cold-water methods for a variety of gamefish. Largemouths, stripers, smallmouths, crappies, and white bass can be caught by vertically jigging slab-type fishing spoons of one-quarter to 2 ounces. Concentrate on deep water hangouts such as submerged islands, humps, bridge pilings, deep points, and river channel drop-offs.

Tip: Shop https://www.basspro.com and find a large assortment of fishing lures and other fishing tackle.

Locate your target species or baitfish on the depth finder, lower the hammered-metal spoon to that level or slightly above it, then work the lure with sharp lifts of the rod. As you drop the spoon, lower the rod tip just fast enough so that the lure falls freely, but without excessive slack forming in the line. Most strikes will come as the lure flutters down like a wounded shad.

Tip: Very early in the season, bass will be concentrated on deep water structure where a slow-crawled jig or live minnow works wonders. Once they begin moving shallow, they’ll be more spread out and a fast-moving searching lure is best.

Spinnerbaits, crankbaits, diving minnow plugs, and lipless crankbaits are the top choices. Keep your electric motor turned up fast and comb cast as much prime shallow water as you can, concentrating on logs, secondary points, clay banks, and shallow flats.

Tip: For early season prospecting on trout streams, try a dropper-fly rig. This lets you work two patterns and probe several depths at once.

To rig a pair of wet flies or nymphs, tie in a fresh tippet section and leave the tag end of the blood knot extra long. Attach one fly to that tag and the other to the end of your tippet, so the flies are about 12-24 inches apart. Another rigging method involves tying one fly onto the leader, then attaching a 12-18 inch length of tippet material to the eyelet of the first fly and another fly to the end of that.

Tip: Points are top locations for early season fish. Bass, walleyes, crappies, stripers, and other gamefish use these locations as travel routes from deep to shallow water and find them excellent spots for preying on schools of baitfish.

Don’t fish these locations haphazardly, though. Instead, probe them systematically. Fish the deep surrounding water on both sides of the point first, then move shallow until you’ve fanned your casts over the entire point.

Tip: When you spot a bonefish or permit on the flats in cold water, it will likely be skittish. Wait until the fish disturbs the water before delivering your cast.

If the fish are ruffling the surface, they’ll be less likely to spook at the sound of a lure, fly, or bait entering the water.

Tip: A top offering for early season dry fly action is the Blue-Winged Olive dry fly. (An Adams will also work well.) These flies imitate the Baetis mayfly that often hatches on cold, gray, blustery days in early spring. Sizes 14-22 can be effective even on drizzly rainy days or when flakes of snow spit form the sky.

The Size of Crankbaits Matter

Tip: Match the size of your crankbaits to the size of forage available to fish at a given time. In winter use large plugs. Later in spring as baitfish reproduce, use smaller ones to match the abundant young-of-the-year forage.

Crappies Before The Spawn

Tip: Before they move in close to shore to spawn, the best way to catch crappies is drift fishing in deep water staging areas. Find these in 8-20 foot depths.

just off areas where they spawn on points, drop-offs, humps and the juncture where creek arms meet the main river channel of a lake.

Use the tight-lining system with a bell or dipsey sinker on the bottom and two jigs or minnows on droppers. Drift or slow troll over these locations where you find fish on the depth finder. Once you hook up, toss out a buoy marker and re-drift through the area since these are schooling fish.

Walleyes: Where and How to Catch Your Spring Limit

Tip: One of the hottest spots in spring for walleyes is the deep hole where a river feeds into a lake. The fish hang out there in the depths, then move up into the current of the river to feed and spawn in the evening and throughout the night. Cast minnow lures, both shallow and diving models, as well as jigs tipped with nightcrawlers.

Smallmouth Bass: Fish Them Slow and Easy for Spring

Tip: Smallmouths inhabiting rivers are sluggish in late winter and early spring. They don’t’ want to fight much current or have to run down fast-moving baitfish. Look for them in areas shielded from the main brunt of the current—behind rocks, in back eddies, at the bottom of slow deep pools and near undercut banks. Cast a hair jig tipped with a plastic or pork trailer in the 1/8 to 3/8-ounce size and reel it slowly and steadily back through these protected areas. Expect strikes to be slow and sluggish—just like the bass feel. But they won’t be sluggish once they feel the sting of your hook!

White Bass: The Best Way to Fish Them in Early Season

Tip: Trolling is one of the most reliable tactics you can use to locate these scrappy panfish, since you can use a variety of lures to probe several depths. Top offerings include ¼-1/2-ounce jigs, small diving crankbaits, jig/spinner combos, and silver spoons. Troll areas where humps rise up from the lake floor, points, and lower sections of feeder rivers in depths of 8-25 feet.

Striped Bass and the Spring Run

Tip: One of the best ways to catch cold-water stripers is to cast a lipless crankbait such as a Spot like the popular Cotton Cordell Super Spot Lipless Crankbait or Rat-L-Trap across points, near drop-offs, or close to bridge pilings. Allow the lure to sink near the bottom, then reel it back slowly. Halfway back, stop suddenly. As the lure sinks, fish will nail it like they would grab a wounded shad.

Gearing Up for Chilly Spring Days on the Water

Tip: Early spring fishing outings can be surprisingly cold on the water. Wear plenty of warm clothes such as wool or high-tech synthetics and dress in layers so you can take some off during midday if temperatures warm up. And be sure to bring a face mask for those chilly rides in an open boat to the next fishing spot!
No other time of year offers a better chance to catch a wide variety of gamefish than late winter and early spring. Don’t miss out on it this fast-paced early season fishing.

Gerald Almy has been a full-time outdoor writer for over 35 years, with articles published in over 200 publications. He has written hunting and fishing columns for many newspapers both in Virginia and Texas, as well as the Washington Post. He has written two books on fishing and contributed chapters to a number of hunting books. He has won many awards for his writing. In 2008, a feature he developed for Field & Stream and wrote for five years called “Best Days of the Rut,” was nominated for…
END_OF_DOCUMENT_TOKEN_TO_BE_REPLACED