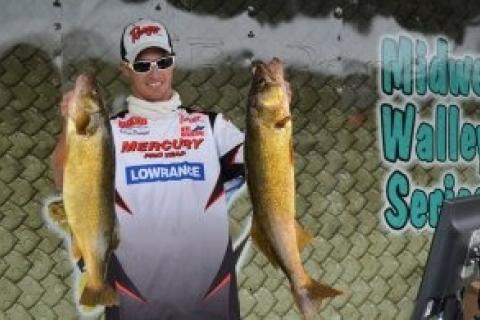 Let's examine the phenomenal rise of a young professional walleye angler with multiple victories and more than $300,000 in winnings over the past few seasons; introducing young gun 25-year old Korey Sprengel.  He lives in the south-central Wisconsin city of Beaver Dam, and grew up not far away near the shores of Fox Lake.  His success story is no accident.  His work ethic and preparation provide lessons for even the grizzled pro anglers.

First of all, how does a young guy get time off work to follow his dream?  "My boss understands and gives me time off for tournaments.  You have to have a job like this to fish at this level," Korey said.  When home, Korey is a mason, doing brick, stone and concrete work since graduating from High School.

Most pro anglers have interesting stories about their beginnings.  His is no different.  He started out with local bar tournaments at age 18, and moved to the FLW Leagues.  He did it in a borrowed boat.  "My buddy let me use his 18-foot boat, which was really run-down.  The trade was that if I took care of it, I could keep using it."  Korey  replaced plugs (some weren't even connected), changed gear lube and eventually exchanged the lower unit, re-wired the entire boat, detailed every inch, replaced the trailer tires and heard this from his friend, "My boat is cleaner and runs better than when I got it."

Korey moved into the professional ranks in 2009 by fishing the MWC with his dad, and has fished the MWC every year since (now with a buddy).  In 2011, he captured the Cabela's National Team Championship and the MWC qualifier.  In 2012, he won the FLW tournament on Bay de Noc.  He was also victorious in the inaugural 2013 National Walleye Tour pro event on the Mississippi River.

His answers to the big question "Why?" reveal much and serve as lessons to those aspiring for similar success.  "The biggest reason for winning so early in my career is that I really prepare for each tournament," he said.  "I don't know if it's different from anybody else, but I devote every waking moment so that everything is ready.  I also develop a good game plan."

In other words, his equipment is perfect.

Add to this a game plan that includes every possible fishing report, every
tournament report - results, where and how won, comments, what's happening now and last year and in the past at the same time, and the biology of the lake.  "It always has something to do with bait fish.  I try to figure what and where the walleye's food is located, if it will be moving or in a certain area; that's a big part of my preparation," he said.

Weather plays an important role, and often dictates where the forage might be, how it affects bait fish spawning, where it might force bait, and forecasts are critical to his plans.  "Where will walleyes go when bait or weather changes?" he asked.

Combined with all the research is mapping.  "I start out with large NOAA paper maps, examining as much as I can, trying to find key breaks, where suspended fish might lurk, vegetation, flats near deep water, rocks, etc.," he said.  "I then turn to the electronic maps.  I really like the Navionics maps I can review on my computer, and match them with spots I have found on the paper maps, and plug these GPS points into my units.  I like an easy reference when I'm on the water."

With his mind wrapped around a new body of water - most tournament waters are new to him - Korey said, "New waters don't bother me much.  I try not to be intimidated.  I have everything ready, and for the first few days, fish the way I like, and stay in my comfort zone.  This way I don't get overwhelmed."  He continues to examine the situation, but stays with his strengths which are first and foremost open-water trolling, especially with crawler harnesses.  His number two strength is fishing weeds, and third is jigging.

At Red Wing earlier this year, he put his preparation into practice.  "I knew big fish responded to jigs and ring worms in April.  After determining the stage of the spawn and picking the brain of friend Bill Shimota, I wanted to become good at jig-worm fishing," he said.  He spent three full days getting comfortable with the tactic, learning to watch his line, the correct jig weight and angle to reduce snags, boat control, wind and current. "It was hard to get confident when not getting bites, but I stuck with the pattern," he admitted.  During the two-day National Walleye Tour event, he jigged 80 percent of the time and was the only pro to catch limits both days.  "Yes, this was a new pattern for me, but it had accounted for big fish in the past, and to do well, I knew I had to stick with it," he said.

Korey's attitude about success could be emulated by more young people in all walks of life.  He said, "When you put your money into something, you work harder!"  The results prove that.  Many friends and family members have been surprised at his early success, but admitted, "It made me feel good when they told me they believed in me and told me I had what it takes."

He also had many questions about the business-side of fishing along the way and joined the National Professional Anglers Association to learn.  "This opened up avenues as I met pros on a level playing field at conferences.  As a younger angler, I guarantee my generation of pro anglers can learn the industry and meet the leaders via the NPAA," he said.  His biggest NPAA conference lesson came when Chase Parsons taught a class on how pros should present seminars.  "I do a few each year, but am trying to get into this part of the promotional game," he said.  Pros Bill Shimota, Mark Courts and Tommy Skarlis have been especially helpful.

Skarlis, a decorated walleye pro with numerous victories, and in demand as a seminar presenter, said, "After watching Korey on stage talk about his father, friends and family, and carry the first place trophies, I felt he was a superstar in the making.  I reached out to him and some of my sponsors and offered whatever assistance he required.  That is something legendary anglers like Gary Parsons, Keith Kavajecz, Jimmy Saric, Denny Brauer, Norb Wallock and Larry Nixon did for me.  I feel we need as many Korey Sprengel's competing and showcasing the exciting sport of fishing.  He epitomizes the modest yet energized and amazingly talented young competitive anglers that will positively influence younger anglers."

Korey will fish three MWC tournaments and the Championship, the National Walleye Tour and the single AIM tournament in 2013.  He can be reached via Facebook.  His sponsor contingent continues to grow, and includes Ranger, Mercury, Lowrance, Krugerfarms.com, Berkley, Fenwick, Pflueger, Off-Shore Tackle, Federal Mogul, B Blades and MW Marine.