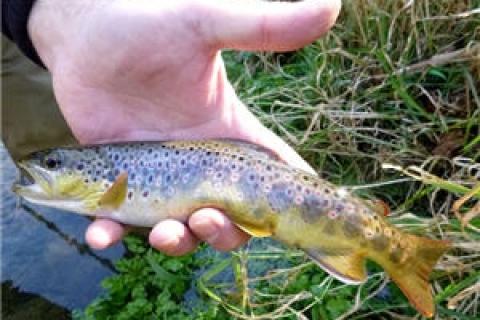 Among autumn’s challenges is finding the time to squeeze in the many outdoor opportunities that exist at this time of year. One adventure I promised myself this fall was a trip to central Pennsylvania, one aimed at fly fishing for the wild brown trout that prosper in the region’s many limestone spring creeks. While I visit these streams during the spring and summer, come fall, I get wrapped up in other forms of hunting and fishing.  Not this year!

My friend Mark Transue joined me on the trip.  Mark’s a skilled fly fisher, one who has fished these streams for decades.  But like me, he’d never tried them during late fall.

These creeks, which include Clinton County’s Fishing Creek (commonly called Big Fishing Creek) and Centre County’s Spring Creek, harbor excellent wild brown trout populations.  So any lack of sport wouldn’t be due to a shortage of fish.  These streams are also loaded with natural food.  In addition to an assortment of mayflies and caddis flies, they also host a variety of crustaceans — scuds and sow bugs mostly.  The browns can afford to be selective.

Another issue is that fertile spring creeks commonly contain an abundance of vegetation — beds of watercress and weed-coated rocks.  Fishing subsurface flies means dealing with regular coatings of slimy and clingy green growth.  Dry flies are an obvious solution; you hope there’s enough bug activity to have the trout looking up.

Mark’s prediction was correct.  We worked hard for fish, but managed to get a few to hand.  And those we did came on size 18 and 20 blue-winged olive dry flies and equally small Griffith’s Gnats that mimicked, at least closely enough, the tiny natural insects the finicky trout were rising to.  We had to drop down to 7X tippets as well.

Wild trout fishing provides a challenging yet rewarding fall option.  Just be sure to check out your trout fishing regulations before heading out.  It’s not uncommon for wild trout streams to be closed to fishing at this time of year, the period during which both brown trout and brook trout spawn.  The stream sections we fished permit angling year round, on a catch and release basis.

Jeff Knapp, of Kittanning, Pa., has been covering the outdoors for over 20 years. He's been published in a wide variety of national, regional, state and local publications. He also operates the Keystone Connection Guide Service, which focuses on fishing for smallmouth bass on the Allegheny River, as well as other species in select western Pennsylvania waters.Â
END_OF_DOCUMENT_TOKEN_TO_BE_REPLACED