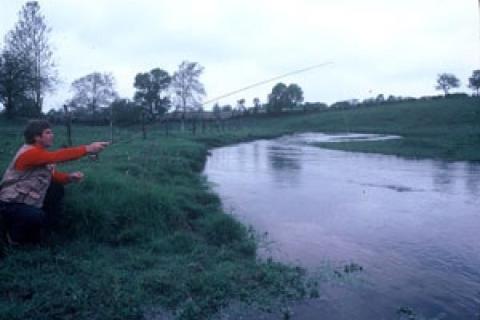 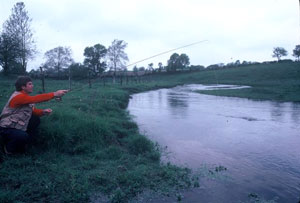 Four of the most hallowed streams in trout fishing literature — written about by Vincent Marinaro, Charles Fox and others — are Big Spring Creek, Falling Spring Run, the Yellow Breeches and Letort Spring Run, known as part of Pennsylvania's Limestone Streams.

Today, half a century after they played such a formative role in the development of American trout fishing, they continue to provide exciting angling for a mixture of native and stocked brown, brook and rainbow trout.

Here's a rundown on what to expect on each stream.

This is the place to start if you're new to fishing limestone streams. It's the largest and most forgiving of the big four limestone streams. Its waters flow a bit milkier than the other three crystalline creeks and some stocked trout are also available in addition to native fish.

The section up and downstream from the Allenberry Playhouse resort near Boiling Springs is the one to concentrate on. The facility allows parking and free access to these waters by anglers. All told, 34 miles of the creek offer trout fishing. In the past, a state record rainbow was caught here, a 10-pound, 11-ounce trout taken on a size 16 Cress Bug.

Good hatches include the March Browns, Sulphurs, Hendricksons, Blue-winged Olives and various caddis flies. The most famous hatch is a mayfly that emerges in clouds on hot August evenings, Ephoron leukon, simply called the "White Fly" by locals.

Terrestrial fishing is superb from March through November along the shoreline and streamers such as the Wooly Bugger are also good. Nymph fishermen do well dead drifting their offerings near riffles.

This stream near Chambersburg is a joy to fish and has one of the few wild populations of landlocked Shasta River rainbows in the East. These trout lack the strong migratory characteristics of most eastern rainbows that have evolved from steelhead lines.

Terrestrial action is excellent, with ants, crickets and beetles the top patterns. Streamers can work, as will shrimp or scud patterns in sizes 12-20 if no fish are working on top.

This famous stream is so small you'll rarely need to wade. Fishing from the bank is most effective. It has a naturally reproducing population of native brook trout in the headwaters, plus browns and rainbows further downstream. Fish in the 14- to 22-inch range are common.

An Adams, midge, blue-winged olive or terrestrial pattern is the best bet for surface action. Most fish are taken by anglers roll casting cress bug and scud imitations in sizes 12-20.

This is where legends of trout fishing Vincent Marinaro and Charles Fox formulated most of their fly fishing theories, though they also fished the other three streams frequently.

The major species here is the brown, and they are wary, native fish, but definitely catchable. Kneel as you approach and stay back as far as you can from the trout, trying to spot them a long cast away. Then deliver a shrimp, scud or cress bug. If the fish shows a willingness to rise, an olive, sulphur or terrestrial pattern may well draw a slurping take.

Relish the moment. You are fishing hallowed waters, and meeting the challenge of catching and releasing a wild trout here, or on any of the other three streams, is one of the greatest pleasures in fly fishing. And it's all available, for the cost of a fishing license in south-central Pennsylvania.

Gerald Almy has been a full-time outdoor writer for over 35 years, with articles published in over 200 publications. He has written hunting and fishing columns for many newspapers both in Virginia and Texas, as well as the Washington Post. He has written two books on fishing and contributed chapters to a number of hunting books. He has won many awards for his writing. In 2008, a feature he developed for Field & Stream and wrote for five years called “Best Days of the Rut,” was nominated for…
END_OF_DOCUMENT_TOKEN_TO_BE_REPLACED