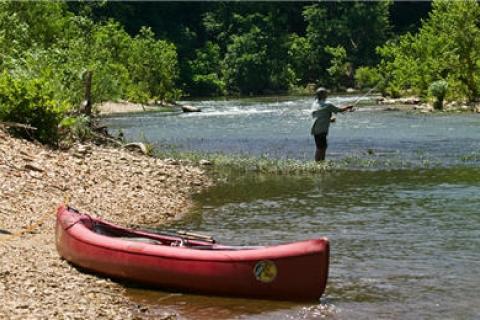 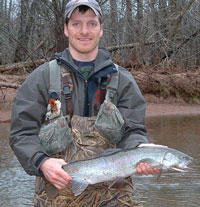 Going from winter to spring brings open water and an early opportunity to do a little fly fishing. But fly fishing during this time of year can be hit and miss. As usual, when the conditions are right, finding fish will be easy. But fishing can also be slow, making you feel as if there's nothing alive below the water's surface.

Early-season fly fishing definitely has its benefits. First, there is usually little or no fishing pressure this time of year. Most people are more worried about shoveling their walkways than lining up along the river bank. 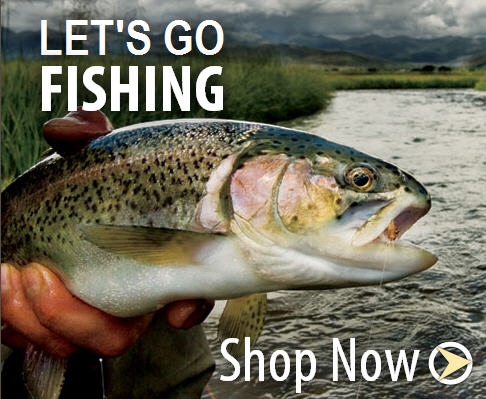 With fewer crowds come less wary fish. Trout haven't seen many flies over the last few months, and this can make them more eager to take your offering. If you're lucky, you might run into a short-lived afternoon hatch or two, but don't count on it. Hatches occur rarely this time of year due to harsh winter water conditions, which are just not conducive to hatching insects. This makes nymphing your best option when targeting those early-season lunkers.

Since water conditions are generally too cold for consistent insect hatches, trout will key on food sources that are available all year long. These resident food sources include leeches, minnows, scuds and immature nymphs. If trout come across these types of food sources, they will greedily devour them. If the weather does happen to warm, keep a keen eye out for an afternoon hatch to secretly come off the water.

The best advice I can offer to anyone interested in this type of early-season fly fishing is to carry a bit of everything in your fly box. A few suggestions would be to carry large nymphs such as the *** Creek Nymph, Girdle Bug, Kaufmann's Stone and Hare's Ear. Small nymphs such as the Pheasant Tail, Prince and Epoxy Back Stone should be included. Lastly, a few streamers such as Wooly Buggers, Rubber Leg Wooly Buggers, Muddler Minnows and Rabbit Strip Streamers are always a good idea.

Early-season fisheries can be characterized by sparkling spring days or (more often) chilly, windy, drizzly days. The first hatches to produce decent dry-fly fishing are Midges, Early Black and Brown Stoneflies and Little Black Caddis. These hatches can be light or heavy, depending on the fishery's water temperature, speed and depth. Targeting the bigger of the dries (stoneflies) is a good idea for catching lethargic early-season trout. These flies represent a good sized meal that even the wariest trout can't turn down. During the warmest part of the day, look for slow runs below fast riffles and side eddies to hold emerging adults.

The first mayflies to show up are BWOs and Blue Quills. These flies emerge just after the early stones and caddis when the water temperature is consistently in the high 40s. These special mayflies can hatch as early as 11 am and go on through most of the afternoon. Always look for the heaviest hatching to occur at the warmest part of the day.

When the water temperature reaches approximately 55-degrees for a few consecutive days, start looking for the bigger hatches. Quill Gordon's, Light and Dark Hendrickson's and larger caddis flies will start emerging, causing some great fishing action. Unlike the sporadic surface activity provided by the early hatches, these large bodied flies will awaken even the most lackadaisical fish and bring them to the surface to feed. If the temperature quickly dips down in the afternoon while a hatch is taking place, the hatching adults will have problems drying their wings and will ride the water's surface for extremely long periods, resulting in an easy meal for trout.

Water normally runs high and fast during the early season, and the trout you find will be tight against the banks. In long, slower runs and riffles, trout will rest against the bottom or behind structure and away from the fast current, but they'll still remain close enough to feed on any insect that gets swept in their direction.

Fly fishing the early season is done most effectively by dead drifting a heavy nymph with either a strike indicator or a big dry fly on a weight-forward floating fly line. These lines are great for this early season because they allow the angler an opportunity to either fish nymph's deep or dries high on the water surface.

For floating lines, a good early-season leader should measure anywhere from 9' to 12' in length with a fly tippet to match the fly size. Ideal early season fly rods will be 9' to 9'6" fast-action rods. Longer rods seem to be a little better this time of year because they allow the angler to easily handle excess fly line on the water and mend the line as it hits fast water flows. Longer rods also make it easier to handle large pre-spawn fish.

To be successful in early season, fly anglers will have to anticipate the best holding spots, then cast and drift flies in the target zone. With the high water conditions normally seen this time of year, many unproductive runs and riffles will look fishy; knowing your river and where fish normally hold will allow you to sidestep these areas and concentrate your time and effort where the fish hold.

Like most other types of fly fishing techniques, early-season nymphing has two general approaches that anglers use to get flies in front of fish. The most often used technique is an across-stream drift that places the fly directly into feeding zones.

Start this technique with a cast across and several feet upstream of the structure you plan on fishing. Throw an upstream mend into the fly line at this point to allow the line and fly to drift downstream naturally without excessive drag being placed on the fly. As the fly drifts downstream, follow the line with the rod tip while gathering slack line. Once the fly has passed the run or structure you plan on fishing, raise the rod slowly dragging the fly off of the bottom and back to the surface and repeat the cast. In most cases, with the high-water conditions, fish will not bite on the first cast, so repeat casts to a quality run or riffle should produce results.

The second early-season nymphing technique is the down-and-across drift. Cast the fly across the stream, allowing the current to carry the fly downstream. As the fly line gets pulled downstream, the line and leader will tighten, allowing the fly to swing to a position directly below the angler. Once the fly has completed the swing, slowly raise the rod, which drags the fly off of the bottom and back to the surface to be re-cast. Keep in mind that with the high, fast flows associated with this time of year, lots of debris will be flushed downstream. As your indicator drifts, check any little bob or bounce to see if it is a fish. In most cases, trout will take flies very lightly, never giving anglers a significant sign that they are on the line.

If you're lucky enough to encounter an early season hatch, then drifting a dry or two can definitely be very productive. In most cases, the basic upstream and across technique will work very well. Cast dries upstream and across from rising fish. After the fly lands, immediately mend the line upstream to set up a drag-free float. If the dry goes over the fish with no response, pick up the slack line and recast the fly for a new drift. Watch for fish taking dries near the banks and not to the middle of the river.

Another good point to remember is that jumping fish may not be feeding, so don't waste too much time chasing after these fish. Once you have found where the fish are sitting, cast and retrieve flies for 10 to 15 minutes or until you feel that you have covered the water effectively.

At first glance, most rivers look too difficult to fish due to the high fast water covering banks and structure. But with a few extra layers of clothing, the right techniques and properly chosen flies, you can connect with the fish of a lifetime.

Have Some Fun & Fly Fish for Bluegills, The Seasons, The Patterns, The Presentation

Jason Akl is a writer, commercial fly tyer and guide with 15 years in the industry. Professionally, he's been a seasonal guide and fly tier that ties commercially and teaches tying classes to both adults and children. Most of his flies make their homes in fly shops in the northern Midwest but some have found their way as far as Europe. As a freelance writer, he's had many written pieces appear in both Canadian and American publications, as well as numerous global websites. When not on the…