Why You May Be Wrong About Bucktail Flies

When I first started tying flies, I tied bucktails. That's fairly standard for most of us because bucktails are relatively uncomplicated and inexpensive to tie. 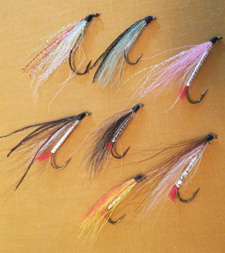 When I gained competence tying those patterns, I moved onto other things because I thought nothing this simple and unsophisticated could be deadly on fish. So I fly fished for years without giving them a fair shake.

Boy was I wrong. Even though they are simple, they work.

But that's the problem with bucktails. Their simplicity lulls you into thinking no thought went into these patterns. Actually, the good ones contain a whole lot of design considerations. All you need do is examine the most successful ones, such as the Mickey Finn or Art Flick's Black-Nosed Dace.

Those two patterns are excellent examples: the former does a good job imitating the minnow of the same name; the latter does a great job attracting fish with its gaudy colors.

That's the first thing you need to decide with any bucktail you tie. Is it going to be an imitator or an attractor?

The next thing is whether you are going to tie it sparsely or heavily. The general rule of thumb is the faster the water, the heavier the bucktail. Also, if you are trying to simulate a big meal, long heavily tied bucktails do that better.

Largemouth bass and pike in the warm, still waters they inhabit have little aversion to taking heavily tied bucktails. Sparely tied bucktails, on the other hand, have more movement, a slimmer profile and translucence that can be just the ticket for more selective fish such as trout.

Bucktails differ from streamers in that they use deer hair or substitutes to create a baitfish profile. Streamers do the same thing with feathers. The bucktail, by its very nature, however, is more durable and works best in fast, flowing water, when stripped fast or trolled.
Most bucktail imitation patterns follow a standard color scheme with lighter colors on bottom and darker colors on top, just as the baitfish they are trying to imitate do.

This makes sense when you think of it because the lighter coloration on a baitfish's belly blends with the sky and water surface when a fish is below it. Conversely, the dark backs blend well with bottom to provide camouflage that gives them the edge against those predators that attack from above.

The point I'm trying to make is that bucktails catch fish and allow a tyer to experiment with attractor and imitator patterns. And, though they are easy, they are far from simple.

If you haven't tried them in a while, maybe it's time to give them another chance.

How to Select the Perfect Scissors for Fly Tying

Think Thread Doesn’t Matter When Tying Flies? Learn How to Pick the Right Thread for the Job

3 Factors You Should Consider When Buying a Fly Tying Bobbin