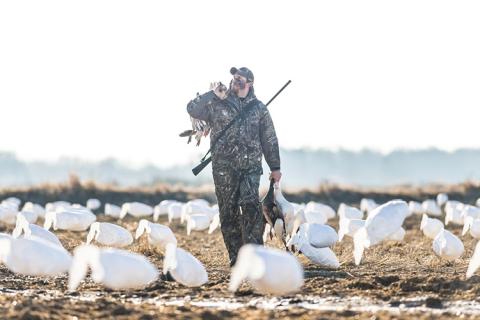 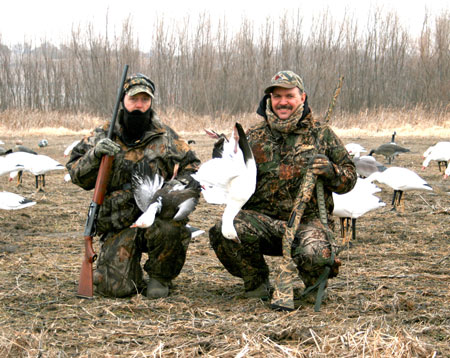 When we think of snow goose hunting, the first thing that comes to mind is what we see on TV: thousands of geese piling into a field at the same time, being shot by the dozens when they finally decide to land. Although those types of hunts sometimes take place in locations like Texas, most snow goose hunting isn't that easy. Harvesting dozens of birds isn't out of the question, but things must be done right.

Snow geese are often hunted hard in the spring as they head north along rivers like the Missouri. Chances are you will find a spread of decoys everywhere you find a field along the flyway. With that much hunting pressure, you need to do everything you can to pull the birds out of the sky and within shotgun range.

Keith Collins of Nebraska has mastered the game of hunting snow geese. He says guys who want to start snow geese hunting need to forget about the tactics they use to call in other types of waterfowl like Mallards or Canadian geese. "Snows are a different bird. If a hunter is hunting for mallards, a dozen or two decoys will do the job and he will probably harvest plenty of birds. With snow geese, you need hundreds of decoys; otherwise, you are wasting your time," Collins explained. One of the biggest mistakes goose hunters make is not having enough decoys. "I have seen geese fly over a few dozen decoys and pay no attention to them. The only time small numbers work is when they aren't decoys; they are actually live birds. I have seen a handful of birds pull hundreds of birds down out of the sky. A handful of decoys won't do it," Collins said.

The problem is most of us don't have thousands of dollars to invest in goose decoys. Most hunters find a happy medium by purchasing a few hundred real decoys, then they make a lot of decoys themselves. "I have some shell decoys that work great, but I like taking old tires and cutting them into four pieces. I paint the majority of each section white and use a little black paint. I buy the cheapest white house paint I can find. They can be built very inexpensively and that is what is needed when you have close to a thousand decoys in a field," Collins said.

Another option is purchasing rag decoys, which can be purchased for less than a dollar each. Rag decoys are nothing more than a white windsock. They blow around in the wind, creating motion which adds realism to your setup. The other advantage is they are "cheaper than dirt," which is important. By having a few hundred shells, a few hundred rag decoys, and a few hundred homemade tire decoys, Collins obtains his large spread. "Having a variety of decoys allows me to add a realistic look to my decoys without spending a lot of money," Collins commented.

Decoy placement is very important when hunting for snow geese. Everybody seems to have their opinion of which type of setup works best. Collins likes having a long thin spread. "My spread may be a few hundred yards long and about sixty yards wide. In certain spots, it is even thinner. It is basically shaped like a guitar — big on one end and thin on the other. I try to simulate that pattern: a big section and a long tail. I also have an opening in the middle of the larger section of decoys to give incoming birds a place to land," Collins explained.

Lawrence Taylor, PR Director for Carry-Lite decoys and Knight & Hale game calls, knows a thing or two about snow goose hunting. To add realism to his setup, he flags incoming birds. "The moment I start to see birds, I start flagging to add motion and a touch of realism to the spread. It often brings in birds that otherwise wouldn't give you the time of day," Taylor explained.

Staying still, just like with any type of hunting, is extremely important especially when birds have been hunted hard. To eliminate the chances of being spotted by birds, Collins uses coffin blinds. "Coffin blinds conceal your movement from the birds. The birds along the Missouri River are hunted for hundreds of miles before they get to me. With the slightest amount of movement, these birds will move on instead of coming down to the setup," Collins said. Coffin blinds help get the hunter a few inches above the ground, keeping them out of the water and mud which is in a lot of fields in the spring.

Game calling is an important aspect of getting snow geese to decoy in the spring. Forget about the mouth calls; almost every diehard hunter uses electronic calls. "Use a portable caller that continuously plays a variety of snow goose calls. Some hunters have multiple speakers to reach out to overhead geese. I'm not sure that is needed. My caller can be heard a half mile away. As the birds start to decoy, I turn the volume down as they get closer. Being loud as they get close can spook the birds," Collins explained. In recent years, companies began making portable digital callers that are wireless and offer a variety of realistic calls that work great on snow geese. Extreme Dimension game calls offers the Phantom Caller. The benefit of digital callers is you can pull out one sound card and put in another for whitetails or predators. One call does it all, making it easier to justify the expense. The Phantom Hunter can play two sounds at once, making the call sound more realistic.

After decoys and calling, the next critical step is finding a good field that is close to a major flyway. "The Missouri River runs through Nebraska, Kansas and several other states. If a hunter wants to consistently bag birds, he needs to be as close to the river as possible. When scouting for areas to hunt, hunters should look for wheat fields or corn fields. Corn fields produce for me most of the time," Collins commented.

According to Collins, the best time to be in fields hunting is late afternoon or early evening. "Snow geese will typically set down in a field in the evening to feed just before they go to roost on the water. Being in the field at that time offers the best opportunities. The early morning can be good and when they are migrating heavily, you can experience decent hunting all day long. If I were to choose one time to be in a field, it would be the afternoon," Collins highlighted.

Collins said a lot of hunters make the same mistakes repeatedly and don't harvest as many birds because of it. "Often hunters shoot too early or wait too long before they shoot. We all hope a large flock will set down in our decoys, but the truth is it doesn't happen very often. It is more likely to have a few birds bust away from a big flock to come check out decoys. When they do, I simply try to get them as close as I can and then shoot. Consistently shooting a few birds here and there adds up at the end of the day," Collins said. Collins often zaps geese with a rangefinder to see how high they are flying. He said it is not uncommon to have them fly over 1,000 yards above the ground and sometimes even higher. Getting birds that are flying that high to come down is difficult. So, when a few birds bust away from a flock and check out your spread, you better be willing to take a shot.

Collins uses 3-inch shot shells in a variety of sizes, depending on what he has left over from the waterfowl season. He says the key to harvesting geese is being patient and letting them come to the decoys. "I try to let the geese get as close as I can before I shoot. By doing this, I end up with less cripples," Collins added.

If you've never tried snow goose hunting, realize that it is a lot of work. Setting out a thousand decoys takes time. Whether you make your own decoys or buy them, a major investment of time or money is needed. However, if you pay close attention to the details and do your homework by scouting and learning the habits of snow geese, chances are you will have a sore shoulder on opening day. Most states don't have a limit on snow geese.

How to Pick the Best Shotgun for Goose Hunting

Canada Goose Hunting Basics, How & Where to Hunt

Tracy Breen is a full-time outdoor writer who writes for dozens of publications across the United States. He has articles published in Outdoor Life, Buckmasters, Bowhunting World, Petersen’s Bowhunting, Bowhunter and basspro.com. Tracy has cerebral palsy and often writes and speaks about overcoming physical challenges to enjoy the outdoors. Learn more about Tracy and his hunting adventures at www.tracybreen.com.