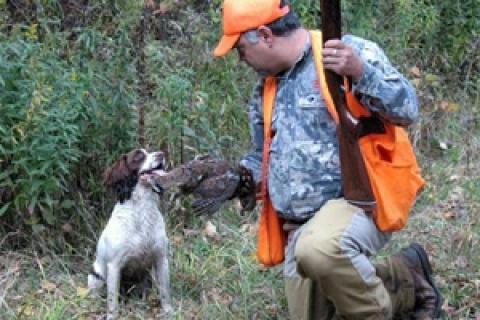 It was one of those perfect upland hunting moments. The ruffed grouse flushed from the wild grapes with Callie, my English springer spaniel, snapping at its tail feathers. As those panicked wing beats broke the stillness of the afternoon, I planted my feet, shouldered my shotgun, and pulled the trigger just as the bird cleared the tangle. It was a smooth, instinctive motion and, at the shot, the grouse folded in a puff of feathers. Seconds later, the dog brought it to hand. 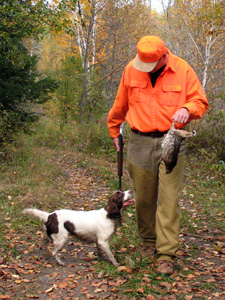 For a grouse hunter, it doesn't get any better than that. Moving a bird from its cover and taking it cleanly on the wing is the pinnacle of our sport. But, to do this consistently, season after season, an upland hunter needs to learn a thing or two along the way. Here are a few strategies that work for me.

Some hunters seem to have a sixth sense about where the grouse are. This isn't magic but rather the culmination of years of experience, observation, and a working knowledge of what the birds need. These guys are constantly reading about grouse habitat and lore; they take note of wherever they hear drumming in the spring. They know that good grouse cover holds food and provides protection from predators — if it is near an evergreen stand or gravel so much the better.

Take a page from these hunters. Every time you or your dog move a bird, have a good look around after the smoke has cleared — you'll see a pattern soon enough. Study grouse biology at home; carry field guides when you hunt; learn to recognize common grouse foods in your area. After a while you'll develop that sixth sense too.

Every serious grouse hunter I know keeps a hunting log. Some maintain elaborate leather-bound journals in which they detail particulars of the hunt such as the date, cover, number of flushes, dog work, weather, harvest, and crop contents of the birds. Other keep it simple, by marking covers on their handheld GPS. Either way, the hunter is reminded of the places that produced grouse last season.

Do this consistently and it won't take many seasons before you have a bevy of early, mid, and late season options. The more options you have, the better your chance of having a grouse dinner.

Over the course of a season, few of us get enough shots at grouse. So it only stands to reason that a hunter ought to make the most of each opportunity. I do this by honing my shotgunning skills in the off-season. Skeet, trap, or sporting clays keep a hunter sharp so that mounting and swinging his scattergun becomes second nature. You'll still miss — grouse have a way of humbling everyone — but you'll also make some shots that you might not have without the off-season practice. It just takes a few of these to turn a mediocre season into a great one.

Spring and summer are tailor-made for training your hunting dog. Despite this, few of us take advantage of the opportunity. Instead, we expect our dogs to work flawlessly on opening day and we're actually surprised when that doesn't happen.

Does your flushing dog hunt too far ahead and blow cover before you get there? A little "hup training" (teaching your dog to sit on command, no matter how far away) in the off season goes a long way towards remedying this. You might also consider brushing up on retrieving drills or introducing your dog to pigeons or game farm forays prior to the season. Some advanced training, such as steadying to wing and shot (where a dog sits down automatically at each flush) might require the help of a professional dog trainer. If that's what you want, the off-season is the time to do it.

Pointing dogs have their own set of training needs, which might include bolstering staunchness, retrieving, hunting range and finding dead birds. Whatever your canine hunting partner's flaw is, the off-season is the time to address it.

The idea is to learn to handle your dog so that you perform as a well-oiled team during the hunting season. There are plenty of great dog training books, videos and DVDs — the off-season is when you should benefit from them most.

Know What Grouse Are Eating and Follow the Food

Grouse eat hundreds of types of food and each provides a clue as to where the birds are hanging out. That's why it's a good idea to check the crop of every bird you shoot. Knowing what grouse are eating helps you understand their habits and tells you where you should focus your hunting efforts. If the last three birds you shot were full of blackberries, for instance, it's definitely time to hunt any of your covers that hold these shrubs.

Hunt Against the Wind

A dog relies on his nose to find birds. So why would you hunt with the wind at its back? We all know that there isn't any good reason for doing so, but it's one of the first things excited dog handlers forget when approaching good cover.

If you hunt into the wind, your dog will work closer, scent more game and, hopefully, find more birds. It's a simple but often overlooked strategy that can make the difference between a full and empty game bag. This is also an important consideration when looking for a lost bird. Take your dog downwind from where you think it fell and let it start hunting from there.

The Key for a Dogless Hunter is to Stop and Start

A good grouse hunting dog provides opportunities that you might not have otherwise had, but that's not to say that a dogless hunter can't do well. The key, for a dogless hunter, is to stop and start through likely cover and change direction often. These unpredictable patterns unnerve grouse and invariably pressure them into flushing. Another added bonus is that when you stop you can sometimes hear the put-put-put of a grouse moving just ahead of you. If that's the case, get the gun up and rush it.

Don't Hesitate to Take the Shot

A good upland shooter doesn't hesitate. He takes the first available shot, even if it's not a great one.

If you wait for a better chance you'll rarely get it. Similarly, if you are leading a bird that disappears behind a screen of leaves, follow through, and shoot anyway. You'll be surprised how often you connect. If not, shells are cheap.

While we're on the subject of shooting, be ready for the second flush. Often, especially, early in the season when birds are still in their family groups, multiple flushes do occur. If you keep this in mind, they won't catch you flat-footed -- or with an empty gun.

Follow Up for a Chance of a Second Flush

Whenever you flush a bird and don't fold it, mark where you last saw it. Most times they won't fly much further than 150 yards. If you marked it well and follow up immediately, you have a good chance of forcing a second flush.

Another advantage of following up on grouse is that they sometimes lead you to new covers. If that's the case, don't forget to mark it.

Lastly, never assume that you missed any grouse that you shot at. After the shot, keep quiet and listen. Sometimes you'll hear a mortally wounded grouse doing its death dance against the ground — that's the one that you thought you missed.

Tip: Stay visible and safe out in the field with a bright blaze Safety Overlay Vest from Browning that features a zip front, back license loop, and two large snap flap front shell pockets.

A fast-handling 12-, 16- or 20-gauge shotgun is ideal for the uplands. Most gunners like double guns. I happen to prefer a pump because that's what I shoot best with.

Whatever, your preference, you can't go wrong using 2 3/4-inch shotshell ammo filled with 7.5 shot. Grouse aren't tough birds and it doesn't take much to bring them down. Since most shots are within 15 yards, the more open-choked your barrels are, the better.

Other essential grouse hunting tools include a quality blaze orange upland hunting vest with a lined game pouch; brush pants; comfortable, well-supported hunting boots; and a compass and/or GPS. If you are hunting with a dog, a whistle, water bottle, portable dog dish, dog first aid kit, and lead are important too. When working heavy, thorny cover, a pair of shooting glasses that protect your eyes are worth their weight in gold.

No one ever said grouse hunting was complicated. But it does take some planning, know-how and skill. Though I've still got a lot to learn, over the last few years, these strategies have made me a better grouse hunter. Hopefully, they'll do the same for you.