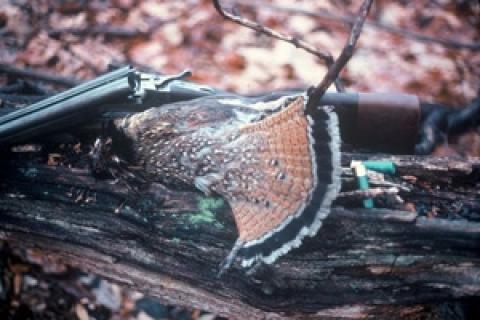 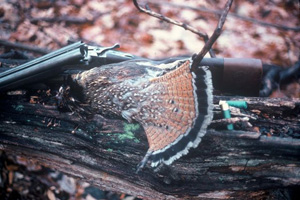 When deer seasons are over or winding down, for most of us this means it's time to turn to upland birds and small game to finish out the hunting agenda for the year. And if you live roughly in the eastern half of the U.S. or Canada, perhaps the greatest quarry of all awaiting you now for late season hunts is the ruffed grouse.

Its true grouse that populations aren't what they were 20 or 30 years ago in some areas. But there are still enough of these beautiful brown and russet birds to make a hunt well worth the effort. And in a few Midwestern areas and Canada, grouse numbers are still at excellent levels.

Before you head out, though, make sure you're in shape and ready for the challenge this intriguing quarry offers. Grouse hunting is a sport for those with strong lungs and sturdy legs. Long days of hiking through thick, sometimes steep terrain are required.

Even middle-aged and older hunters can enjoy the challenge this wary bird offers, though, if they go at it carefully by pausing often and not hunting too aggressively. Keeping outings on the short side, say 3-4 hours, instead of a dawn-to-dusk days, also helps.

Unlike some types of hunting, grouse hunting often gets better as the season progresses. Lots of early season cover dies out, concentrating the birds more and making them easier to locate.

You can hunt grouse either by jump shooting or by following a pointer, setter or Brittany spaniel. I've done it both ways, and while I enjoy the dog work, you'll generally get a chance to shoot at about the same number of birds with or without a canine companion.

The best dogs are ones that hunt slowly. Often they are older dogs. You want them to hunt close and not bump too many birds out of range.

If you search for grouse without a dog, the key to success is recognizing what kind of cover the birds like and then using the "sudden pause" technique to flush them. Grouse would rather skulk in heavy brush and let you walk right past. But if you stop, they'll sense they've been spotted and flush to escape, giving you an opportunity for a shot.

Examine the cover ahead as you walk and plan your pauses so they take place when you're in a good spot to shoot and close enough to the cover that the grouse will be in range when it flushes.

As you hunt for grouse, you'll soon discover there are basically two main types of cover. One is open and airy and looks like it would be a good place to take a Sunday stroll. You can see for long distances and there's little ground cover. Trees present are mostly mature hardwoods with lots of "air" between them. That's not the kind of habitat where you'll find grouse.

The second type of habitat is thick and tangled. Patches of greenbrier, grapevines, honeysuckle, crab apple, aspen, alder, hawthorn and dogwood predominate. Tree growth consists mostly of saplings. This is the type of habitat where you'll flush late season grouse. There's lots of cover for security from predators and food is present in the form of grapes, berries, seed-bearing plants, ferns, forbs and buds.

When hunting grouse in late season, you might flush a number of birds at one time. Cover is concentrated and food supplies have dwindled, so the birds flock together in groups during winter. You're just as likely to flush three birds out of a blow down or grapevine thicket as one.

When you connect with a bird, mark where it fell in your mind. Then be ready for a second flush. If you miss, just get ready and try to do better on the second or third chance. That could come within seconds after the first bird rockets out of the cover.

When choosing a shotgun make sure it has a skeet or improved cylinder choke tube in a single barrel, improved cylinder and modified in a double. Shot size can be either 6's or 7 1/2's. Wear rugged canvas-faced brush pants and a blaze orange vest or coat with large pockets for your lunch and extra shells as well as a game pouch for any grouse you bag.

Good luck. When trying to connect with a rocketing grouse, luck is something most of us need a lot of!

Gerald Almy has been a full-time outdoor writer for over 35 years, with articles published in over 200 publications. He has written hunting and fishing columns for many newspapers both in Virginia and Texas, as well as the Washington Post. He has written two books on fishing and contributed chapters to a number of hunting books. He has won many awards for his writing. In 2008, a feature he developed for Field & Stream and wrote for five years called “Best Days of the Rut,” was nominated for…
END_OF_DOCUMENT_TOKEN_TO_BE_REPLACED