How to Choose a Handgun for Hunting 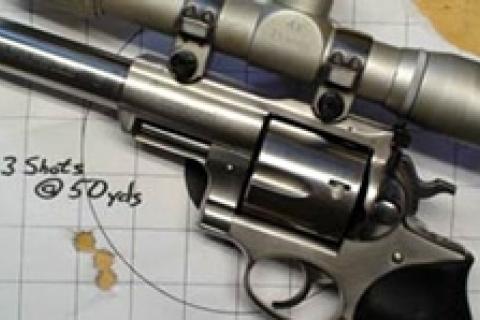 The frost-covered ground crunched under my insulated boots no matter how hard I tried to sneak to my deer-stand. The rut was in full swing and I had high hopes of filling a buck tag. Nearly as an afterthought, I grabbed a set of rattling antlers as I got out of the truck.

Minutes later, as I overlooked a winter wheat field, glancing over the perimeter of the field, I began questioning my sanity. Here I was perched in a tree with a set of antlers and... a handgun?

Half-heartedly, I tickled the antlers together. After a painful 10 minute wait that seemed like hours, I smacked the antlers together, meshing and grating them against one another to imitate the sound of two bucks fighting over a hot doe. I had barely set the antlers aside when I caught movement out of the corner of my eye. A buck was sneaking in to steal the girl — or so he thought.

I raised my sidearm, using both hands to steady it, and found the buck in the crosshairs and touched off the trigger.

That was more than 20 years ago and my first handgun whitetail. Though, I do hunt with other firearms on occasion, I find toting a handgun, whether hunting small game or whitetails, one of the most challenging methods to hunt.

Handguns can be broken into four categories: single shot, revolver, bolt and semi-autos.

Single-shot pistols, commonly referred to as "short guns," come in one of three possible actions: breakdown, falling block or rotary cannon breech. Single shots are chambered in most modern calibers, as well as most handgun calibers, and are capable of producing rifle-like accuracy.

With their interchangeable barrels, the Thompson/Center Contender and its big brother the Encore are sure hits for new and experienced handgun hunters alike. These breakdown-action single shots are chambered in nearly every conceivable cartridge known to man.

While falling block actions and cannon breech actions are not nearly as popular as other single shots, they maintain a strong following and are the choice for many die-hard handgunners.

Revolvers are chambered in straight-wall handgun calibers. These hand cannons provide a quick follow-up shot at the squeeze of the trigger. Revolvers, like the single-shots, can be extremely accurate. Revolvers also come in two different styles: Single action, which requires the hammer to be cocked each time to fire the cartridge, and double action, which fires each time the trigger is pulled or can be cocked like a single-action handgun.

Manufacturers like Smith & Wesson and Ruger make a great double-action revolver, while single-action revolver fans tend to choose revolvers from Ruger and Freedom Arms for much of their handgun hunting.

Bolt action handguns are essentially bolt-action rifles with a shorter barrel attached to a pistol stock. They possess, by far, the best accuracy, and are chambered in a wide array of cartridges, more so than any gun enthusiast could imagine.

Although currently only the H-S Precision Pro Series 2000 is available, the Remington XP-100, Savage Striker and the Weatherby CFP remain extremely popular among handgun hunters.

For those looking for bolt-action rimfire pistols, Savage chambers the most popular cartridges and are extremely accurate.

Semi-automatic handguns, such as the Desert Eagle, chambered in legitimate hunting rounds, such as the .357 Magnum and the .44 Magnum, are more than capable of downing a whitetail. While not as prevalent as the other three types of hunting handguns and often disregarded for hunting purposes, semi autos can be very effective in an experienced handgun hunter's hands.

If you are interested in small game hunting with a handgun, the Ruger Mark II is considered by many to be one of the most popular handguns of all time. These semi-autos are reliable, well balanced and ultra accurate, making for the ultimate in small game hunting. Its running mate, the Charger, based off the Ruger 10-22 rifle, has lent itself to a new breed of hunting handgun, also chambered in the popular .22 long rifle cartridge, and sends fear through the local small game population when it shows its face.

Yet still another rifle that is making the jump to the handgun hunting arena is the AR handgun based, of course, on the ever popular AR rifle. The AR handgun shows great accuracy potential and offers the ability of an ultra fast follow-up shot. I can hardly wait for the introduction of legitimate hunting cartridges. When they arrive, I'll be the first in line for one.

Though many states have no caliber restrictions, remember that a short barrel will have a lower velocity than a standard length barrel on a rifle. Because of this, small .22 caliber centerfire cartridges are not recommended for deer sized game; a better-suited .243 bullet should be considered the minimum.

Any good rifle cartridge is a good choice for a handgun.

Most bolt-action handguns are based on 308 length cartridges, though many single shots are available in the 30-06 and the .270 Winchester and any other large caliber you feel you can handle.

My favorite, or at least close to the top of my list, is the 7-30 Waters (a 30-30 necked down to 7mm). Hand-loaded with a 120-grain bullet, this is as good a 200-yard deer gun as you will find, providing adequate knockdown power and superb accuracy.

If you have a hankering for a little more power, then seek out custom barrel makers like SSK Industries or Bullberry Barrel Works. These specialists produce powerhouses capable of taking even the largest African game.

When the subject of traditional straight-wall pistol calibers comes up, I always catch some flack. However, I will stick to my guns (no pun intended) and state the very minimum I recommend for deer hunting is the .357 Magnum with a 180- grain bullet, such as the Hornady XTP, while limiting my shots to 50-75 yards. The .44 Magnum is still the king of hunting revolvers, but other somewhat forgotten cartridges like the .41 Magnum is more than adequate. It provides both good trajectory and sufficient knockdown power. As a rule of thumb, a straight-wall pistol cartridge should produce 500 ft lbs of energy at the muzzle; however, common sense should dictate the right choice in caliber selection. The bigger cartridges definitely have an advantage. The .454 Casull, the .460 Smith & Wesson and the new .500 Smith & Wesson are great pistol cartridges -- they have plenty of power and recoil, which can be painful and ruin novice handgun shooters.

Large bore hunting handguns, like the Smith & Wesson X-Frame of .460 and .500 fame, have more mass to absorb the viscous recoil these ultra large calibers produce. Handguns for security tend to be lighter. Many hunting handguns are ported to reduce perceived recoil, necessitating the need for hearing protection, as well as eye protection.

One often overlooked aspect of handgun hunting is being able to see where you are aiming. To remedy this I recommend a good quality handgun scope. Revolvers are well suited with a fixed 2x or 4x power scope, but on the single-shots and the bolt-action pistols, I would recommend a 2x-7x variable or more if you can afford it.

When it comes to scope mounting hardware, it is essential to use quality mounts and rings as a handgun produces more recoil than a rifle of a similar caliber. I like the steel Weaver-type bases or Picatinny bases with good quality steel rings. Extreme cases, like ultra big bores, call for an extra ring installed to keep the scope in place.

Key to Shooting a Pistol

The key to successful handgun shooting boils down to three aspects: Practice, practice, and more practice. The handgun is perhaps the most difficult to master, but once it is, all of your shooting scores — rifle, shotgun or handgun — will increase.

Practice the way you will be shooting in the field. That is, without sandbags. Practice getting into the shooting position. Once in the field, you will need to be able to get into that stance quickly and quietly, if you plan on using shooting sticks or other artificial support, practice setting it up until it becomes second nature.

There are many accessories that can improve your handgun hunting experience. A good holster is important as it protects the handgun and leaves your hands free. It is also a safety measure. Get one with a flap that will protect the handgun and leave your hands free for climbing into a tree stand or pushing aside brush. Single-shots and bolt- action handguns have sling studs mounted on them to utilize a sling.

Aftermarket grips can make shooting many handguns more manageable, not to mention less painful. Hogue and Pachmayr make several models and styles of rubber grips for many of the most popular handguns.

I use a single shot Contender with interchangeable barrels — a .22 rimfire mounted on the frame equipped with a scope to keep my eye keen and get in some off-season practice with my pistol. It's also cheaper shooting than my 7- 30 Waters. Many other handgunners shoot rimfire revolvers that match their primary hunting sidearm for their offseason pursuits.

How it All Boils Down?

Whether you decide to hunt with a single shot or "Pack Heat" with a revolver, you may find yourself using a handgun to hunt more often. I hope your rifle doesn't develop a complex from being left in the safe.

Is a 20 Gauge Shotgun Enough for Turkey Hunting? (video)

A Guide to the Modern Slug Gun

Steve Felgenhauer is a freelance writer in St. Louis, Mo., whose passion for the outdoors is non-stop. After serving in the U.S. Marine Corps, he went on to pursue a career in gunsmithing. Soon afterward, he began putting his expertise of firearms into written form.