Clean Your Guns Before Storing Them 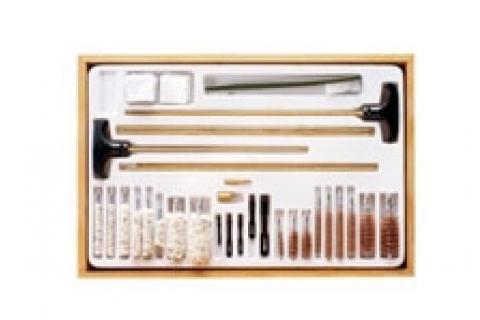 As another hunting season comes to an end, it's easy to get a bit lazy and put your guns away without cleaning them first. You may be thinking, "But I didn't fire my deer rifle this year, so I don't really need to clean it, do I?" Or, "I'll have my old 12 gauge out again soon enough for opening day of spring turkey season, so it can wait until then, right?"

Well, the reality is that anytime you take your gun out of its case or safe, whether you actually fire it or not, it needs to be cleaned. Moisture from the elements, along with sweat and oils from your hand, can all eventually lead to rust, both on the surface of your gun and inside the bore. Really, a quick pass down the bore with an oiled patch and a quick wipe of all outside metal surfaces with an oily rag take only a couple of minutes and give you peace of mind all winter long.

Obviously if you fired the gun, a solvent-soaked patch or two needs to be run down the bore first to remove any powder, copper or lead fouling and residue. This takes only a couple of additional minutes, and it's so nice to pull your favorite shotgun or rifle out of its case next season all clean, shiny and ready to go hunting. As tempting as it is, don't be lazy when it comes to gun maintenance. But NEVER, EVER be lazy when it comes to gun safety.

This past season I learned about a couple of very unfortunate accidents involving muzzleloaders. In both cases, the shooter had put their muzzleloader away with a powder charge and bullet inside the gun after a session at the shooting range. This was principally because some muzzleloaders can become hard to load if you let them sit for days, weeks or even months without cleaning the bore.

The residue from certain powders can get hard and crusty through oxidization, making it very difficult to load the next bullet down the muzzle. This oxidization process takes a bit of time; however, so if you reload soon after firing, then there is no difficulty. Apparently these unfortunate fellows did just that, but then either forgot that they had done so, or were just distracted when they went to the range the next time and proceeded to pour a second powder charge and push a second bullet down the bore. The dreaded double-charge! Attached is a photo of one of the guns. As you can see, the barrel split apart like a banana peel, resulting in serious injuries to the shooter. The other shooter was luckier, resulting in only a badly bulged gun barrel.

The lessons here are simple: