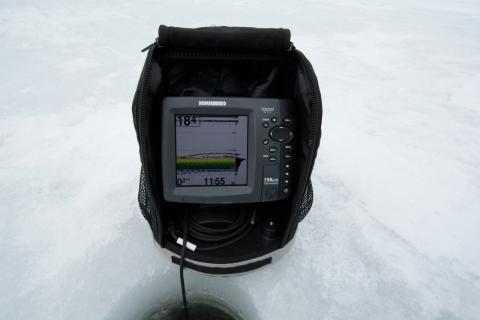 Fishing technology is advancing at a blistering pace. Nowhere is this more apparent than the shifts in portable sonar popularity.

Historically, traditional portable flashers dominated the ice-fishing scene. This was partly due to the slow operation of yesteryear’s LCD units in freezing temperatures.  LCDs also had a nasty tendency to drain battery power like lead-acid vampires. Some still do. For the most part, these shortcomings have been improved and other benefits have been added. While traditional flashers remain amazing ice tools, here are 4 reasons to consider a sonar & GPS combo for ice fishing:

A tad obvious, I know, but GPS capability is such a huge advantage that a sonar/GPS combo has over a flasher. It’s hard to argue with the simplicity of pushing a button to toggle from a Navionics map with your favorite waypoints to a sonar display.  The ability to see it all on the same screen is just icing on the cake.

Depending on how you’ve got your boat rigged, you may be able to mount a sonar/GPS unit you already own onto a portable case for ice fishing. This requires purchasing a case, along with a battery and possibly likely an ice-specific transducer, but these costs are minimal compared to buying a new unit for the ice. Five-inch displays are popular for this scenario.

In addition to a flasher view, sonar provides a scrolling chart view, which captures a temporary history from right to left. This history is extremely useful for adapting tactics to fish mood. A flasher doesn’t record this data, and you must rely on memory for these details.

As an example, let’s say you attracted a fish, raised it, but it didn’t bite. The history shows how far the fish came off bottom and height of the lure. Next time a fish is interested, you can use this data to modify jigging tactics to try something different.

Most of the flashers I’ve used make a faint whirling sound caused by the spinning dial. To many this is a non-issue, but I have to admit when I’m stuck in an ice fishing shelter for hours on end I’d rather use a quieter unit. Obviously, this one really comes down to personal preference.

In fairness, flashers remain incredible ice-fishing tools. I’ve used several different models for years and caught thousands of fish with them. Many anglers I know still prefer flashers and have ATVs or snow machines outfitted with a separate GPS unit for navigation. A lot comes down to personal preference.

I own both flasher and sonar/GPS units for ice fishing. Lately, I’ve found myself grabbing the sonar/GPS combo more often when I’m on my way out the door.  In the years ahead, ice anglers will have even more choices as portable sonar technology shows no signs of slowing down.

Be sure to check out these tips to put more panfish on the ice this season.

A New Definition of Ice Fishing is “Camping on Ice”