The Perfect Spring Fishing Trio: From a Kayak, To Docks, For Crappie (video) 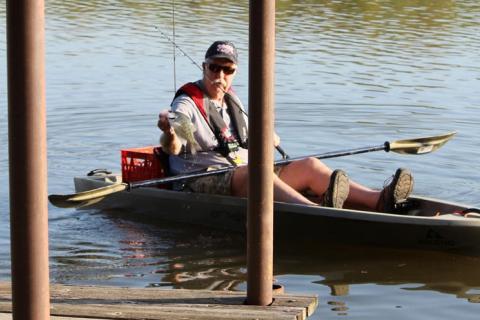 Crappies are called “America’s favorite panfish” for a number of reasons. They are willing biters, fun to catch and taste great in the pan. The only tricky part—usually—is finding where to fish them. Since crappies tend to orient toward cover, whether that cover is downed timber, brushpiles or docks, the first step is to find some.

Of all types of cover that crappies prefer, docks are often the easiest to fish because most of the crappie-friendly attraction is visible to the fisherman. You can see where the floats, posts or poles are, where the cables lie and make a good guess at the fish’s location, and having such obvious targets makes them easy to target 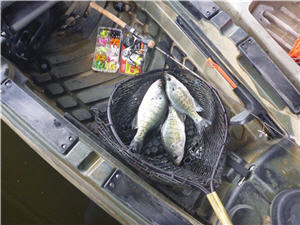 Why Fish the Docks?

Unlike sunken brushpiles, standing timber, rockpiles or stumps on a breakline, docks do more for crappies than just provide cover; they also span the distance between shore and deeper water, making a seasonal roadmap that connects shallow-water spawning opportunities to the deeper water that provides overwintering habitat.

In other words, the right dock provides the kind of cover that crappies like during the majority of the year. And if you add to that the idea that docks are easier to fish because of their visibility when compared to something like a sunken brush pile, then it’s easy to see that docks and crappie fishing fit well together. 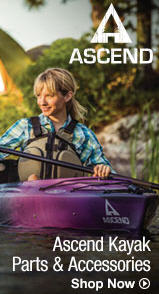 Not all docks are equal, though. Selecting the right kind of dock to fish depends upon the time of the year. Spring sees crappies move up from their winter homes to the shallows to feed and to spawn. Docks that have one end in the shallows are good prospects, as long as the far end is over deeper water. Once the water warms, most any dock can be good if there is enough water under it. Depending upon the clarity of the water, that could be as little as two feet or more than 15.

After the spawn, crappies move out of the shallows and relocate to deeper water—generally. If the dock in question has enough depth, then you’ll find crappies holding there with occasional movements toward shore to feed.

Tip: Docks offer crappie fishermen a lot of opportunity during most of the year. It’s only when crappies head to deeper water to overwinter that a dock may become a crappie desert—but then again, that depends upon the lake and the intensity of the winter. 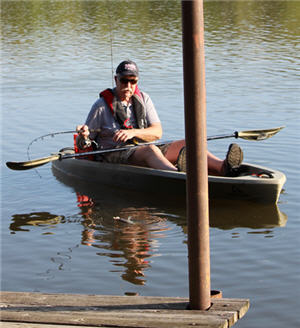 Why Fish From a Kayak?

Kayaks and Fishing Kayaks are a great way to fish docks for crappies. They are by nature stealthy craft. Without a motor they can move in and to a dock quietly. Due to the narrow profile, a kayak can sneak in and around a dock, hitting areas under or near it where fishermen in larger boats can’t.

While it may not seem like it in the middle of a feeding frenzy, crappies can be spooked by loud noises and the sudden appearance of dark shapes overhead. Sneak in to a dock and use a kayak anchor or anchor stake-out pole sometimes called an anchor pin, to hold the kayak a short cast away from the dock, and the fish won’t even know you’re there.

Tip: Anchor Trolley System for Kayaking - Do I Need One?

Another advantage comes from the fact that the kayak is much lower to the water, so shooting a jig back under the floats or along the boat is significantly easier.

The secret to fishing docks for crappies often requires that the fisherman place his jig under the dock, frequently as far back in—past the boat in the well or the boat lift in the well—as it can get. That’s why “dock shooting” is such a strong component of current crappie technique.

Tip: Click here to watch a video with fishing pro Brandon Lester sharing his tips to shooting jigs at docks for crappie.

Shooting is a method where the angler uses the spring action in the rod to shoot a jig, like a slingshot back into the dark recesses of a dock where crappie like to hide.

Tip: Here are a couple of links to view videos with more how-tos on shooting docks for crappie.

While shooting a dock with a fishing lure is often done off the front deck of a bass boat, a kayak makes the process easier and more effective, simply because it’s lower and closer to the water surface.

There are other ways to catch crappies, of course. The standard float and jig lure like the Berkely Gup! Minnow softbait or a live minnow are other effective techniques. While it isn’t feasible to shoot a float, fishing with one along the dock or inside the boat well can be very productive. 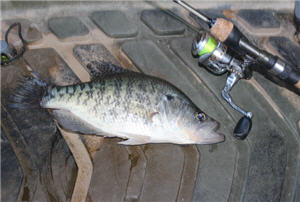 Gear Up for the Kayak Fisherman

While anything from a cane pole to a hand line will work for crappies, for the kayak fisherman, a spinning rod is the best. Crappie aren’t strong fighters, but they still need to be controlled when around docks.

Tip: A six-and-a-half or seven-foot spinning rod is good for general use, and a dock shooting rod for kayak use should run somewhat shorter. A six-footer is a good choice as is one six inches shorter.

The mood of these fish can change from day to day or even hour to hour depending upon a host of variables. That’s why it’s a good idea to stock a series of jigheads from 1/32 to 3/32 ounce with 1/16 ounce jigs being a mainstay. The weight of the jig dictates the rate of fall, and at times crappie show a preference.

The same can be said for the color of the jig. Jig bodies come in a wide range of colors and shapes, and it’s a good idea to stock a selection. As a general rule, though, a body that has chartreuse or white is a good idea. Stock natural colors as well as something psychedelic. And don’t forget black and chartreuse, red and white, blue and chartreuse or blue and white, not to mention silver or gray. Bodies that have metalflake to provide flash are a necessity at times.

Whatever you use or however you fish, you’ll find that crappies, docks and kayaks are a sure-bet combination most of the year.

How to Shoot Jigs at Boat Docks for Crappie - video