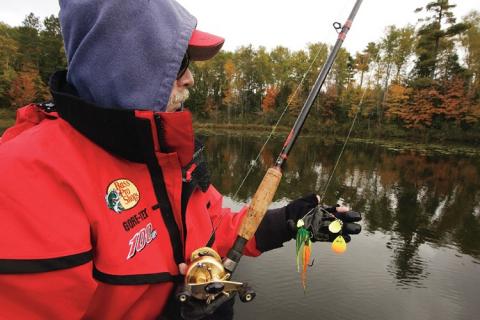 It may surprise you to learn that the fabled toothy monster of the Far North, the muskellunge, occurs in a growing number of lakes and rivers throughout Dixie.

Fall and winter are prime times to fish for Southern muskies. As the water chills, muskies suspending in cavernous reservoirs or holding in dark river holes move shallower and feed more aggressively. It can't get too cold for these beasts — they're highly catchable in Dixie all winter long. Want to experience musky fever? First check with your state's fisheries department to see where muskies are stocked, then try these proven patterns.

Muskies thrive in some deep, clear Southern impoundments. Many highland reservoirs have only a tiny population of muskies left over from aborted stocking programs. A few (notably Dale Hollow Reservoir, Tennessee/Kentucky) have fairly strong musky populations. Highland reservoirs usually have little fish-attracting cover; muskies gravitate to offshore humps and dropoffs and are most commonly caught by trolling.

I've fished highland lakes extensively for muskies. Here are some patterns that can put you on trophy fish in these big bodies of water:

In fall, trolling large bays off the main body of the lake can produce whopper muskies. Fish moving out of their main-lake summer haunts funnel through these areas on their way into the tributaries where they spend the winter. The best bays access one or more major tributaries. They have deep water in the form of a channel or food shelf, over which muskies suspend; a large flat with scattered stumps or weed cover; a major point with a deep channel access; or a submerged hump.

Fall is a time of transition. You may find some muskies entering the bay, others suspending there and waiting for the tributaries to cool down, still others pushing into the creek arms.

Baitfish ball up in bays big-time by late fall and will be clearly evident on your graph; bait schools commonly suspend from 20 to 30 feet deep in open water. Muskies will suspend near this food source, often along with bass and walleye. Use fairly small lures in the fall. I've had the best luck with spoons and beefy bass crankbaits.

When the water dips below 50 degrees, muskies head into the tributaries and can be taken by flatline trolling a variety of lures. Large bass crankbaits and big jointed musky plugs will produce jarring strikes. Target submerged weedbeds, rock ledges, steep channel bluffs and long, slow-tapering points from 10 to 20 feet deep. The tributary pattern produces all winter long, even when the water temp dips into the mid-30's. It dies when seasonal deluges send lake levels skyrocketing.

Many Southern highland lakes have a good population of walleye, a.k.a. "musky candy." In late winter, a warm rain can trigger a walleye spawning run into the upper reaches of the reservoir, and send muskies on a feeding rampage. Walleye whackers occasionally catch giant muskies while trolling perch-pattern crankbaits or drifting live minnows.

These tree-studded impoundments can offer superb musky fishing. Cave Run Lake, Kentucky, is our best example; it's Dixie's premier musky fishery and one of the best in North America.

The tributaries of timbered reservoirs are full of standing and fallen trees, around which muskies hold. A deep channel lined with wood cover serves as a sanctuary for suspending fish. Weedbeds may be present in the creek arms. Water in timbered reservoirs is usually clear to moderately stained, but may turn muddy quickly after a hard rain.

"In October, with the water in the 70 degree range, muskies will move to milfoil beds in the backs of the 'hollows' (v-shaped tributary arms)," Mullins said. "The weedbeds are 2 to 12 feet deep; the best beds are on steep breaks that drop into 20 to 25 feet of water. This is a run-and-gun pattern — unlike in Northern muskie waters, our weedbeds are small and scattered."

Mullins favors a fast presentation with bucktails (large spinnerbats with hair skirts), shallow-running musky crankbaits, jerk baits, topwater lures and buzz baits. On cloudy days, muskies will hang around the outsides of the beds and can be extremely aggressive; the bite declines on bright days, when they bury in the grass.

"All through November, jerkbaiting is great on timbered reservoirs. Muskies respond best to a lazy, gliding jerkbait presentation. Target standing timber and laydown logs on ledges that stairstep out from 5 to 25 feet of water."

"When the water drops into the high- to mid-50-degree range, usually around Thanksgiving, target deep points with standing timber and cast big deep-running crankbaits. Cast shallow and retrieve out deep, then reverse this presentation until you find what they want. Don't rule out a jerkbait, either." Mullins says this pattern generally holds through Christmas.

"In November and December, you can often connect with a big fish by trolling the outer edge of the standing timber lining the old river channel. Many of these trees top out 12 to 15 feet below the surface. Troll all the way up to the creek mouths using big crankbaits. We troll three plugs, two deep and one shallow. This pattern holds until the water drops to around 50 degrees, which is when I quit fishing to begin my annual seminar round at sports shows."

Muskies are native to some Southern rivers and can be locally abundant in small feeder creeks. Rivers holding muskies can range in character from slow-moving to Class 5 whitewater. Many of the best musky streams in West Virginia are fishable only from a jon boat or by wading.

Ona., W.V., angler Ray Hensley has caught some huge muskies from moving water. Here are some patterns he recommends:

"Floating downstream in a jon boat will take you through a series of shallow shoals and deeper holes. In the fall, muskies are primarily in the holes and will be concentrated around submerged trees and logs. Fish the entire length of the pool with jerkbaits and crankbaits, casting these to wood cover coming off the shoreline and to trees in the middle of the pool. I like clear water best. Under optimal conditions, you may see upwards of a dozen big fish a day — that's exciting fishing."

"In midwinter, a heavy rain can produce an unusual and productive stream pattern. As the river rises, muskies move upstream until they encounter an obstruction, usually a spillway or mill dam. This often occurs in December in our region. Muskies will hold behind current breaks in fast water and in eddies at the base of the spillway, and will rush out to nail a big crankbait. The locals who get in on this pattern burn their crankbaits extremely fast, even though the water is cold."

Score Big Bass on Your First Fishing Trip of the Year