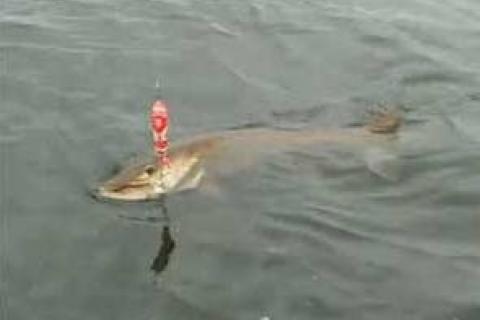 I’ll take a muskie any way I can get one – whatever the method, if it results in a successful catch and release of a nice muskie, I’m all for it. And while I guess my favorite lure to use overall would be a jerkbait, nothing compares to seeing the surface of the water pushed upward behind a top-water lure seconds before the seas part and teeth slash. Regardless of how laid back a person may be, anyone experiencing this will also experience accelerated heart rate, significant excitement and immediate reactionary gushing of some type … or, they’re dead.

Surface lures are an integral part of many muskie anglers’ arsenals. Others, though, use them very little. And surface baits really never seem to get credit for being “big-fish baits,” which in reality, they are. (I’ll never forget the sight I witnessed when one of the biggest fish I’ve ever seen inhaled an in-line planer board I was using to spread lures while trolling). There are also a few misconceptions regarding surface bait use that few folks realize. They are more versatile than most anglers realize.

There are many different types of topwater baits. Some work better in certain scenarios than others, while some are much more versatile and productive in a variety of situations. Here’s a rundown of some of my top surface lure choices; let’s start off with the prop-type baits, which involve a body and rotating blades on a shaft in front or behind the body, or both. These baits are pretty versatile. Most will spin at slower speeds as well as fast. They are most often used with quicker retrieves though, and are great for covering water quickly. They are also great with a rip-and-pause retrieve. Also included here are the globe-type lures, which have a separate front section to which blades are attached; this whole front “head” section rotates on the shaft. Prop-types produce a steady sound.

Along the same lines are the old Mud Puppy, Tallywacker and consequential spin-offs, which are also a two-section lure on a shaft, except in this case, the rear portion is smaller, to which a blade is attached (usually a single) that extends parallel to the lure body. This produces an erratic plop-plop-plop sound and causes the back end of the lure to vibrate. These are generally best with a steady retrieve at medium speed.

Then we have the “creeper-types.” These lures are pretty unique, somehow resembling a cross between a bird and a frog. They involve a body with a set of wings, which cause these lures to have exaggerated side-to-side wobble and a deep plop-plop sound. These lures are best with a straight, slow retrieve. Very enticing, and a good choice for night fishing.

Also in the slow, enticing category is the Hawg Wobbler style – definitely a unique innovation that continues to catch fish. This is a jointed lure that incorporates a crankbait-type lip in the front, which causes it to have an exaggerated wobble; it has the addition of a small prop on the shaft behind the rear section for a little extra sound. It’s got great action and sound – a great “teaser” bait.

Finally, there are the zig-zag baits or surface gliders like the Zara Spook, Fishstick or a hybrid like Sebile’s Splasher. These lures generally have slender, oval-shaped bodies with no props. They require a twitching action with the rod from the angler, causing them to bounce from one side to the other on the surface (walking the dog). Retrieves are slow to medium – more of a finesse fishing situation.

What types do you use and when to use them

OK, with this in mind, what types do we want to use and when? First of all, a common misconception is the season. Many folks only use surface lures in warm-water temps, in warm conditions, and some have a rule to leave them in the box until they start seeing ducklings swimming around. Silly idea.

I’ve been very successful with surface lures in cooler-water temps during the spring and fall. I’ve seen several spring days on which surface lures seem to be the only thing muskie will strike, while other lures types only produce lackadaisical follows.

Another misconception is that surface lures are only effective in dead calm or slightly rippled water. Fact is – they can be deadly in whitecaps. A good general rule to keep in mind, though, involves the amount of wave action you are dealing with when choosing a surface lure type. Basically, the rougher the water, the more sound and size you want. Certainly any lure may produce, but noisier lures consistently out-produce quieter offerings in rough water. On the other hand, when waters are calmer, there definitely seems to be a limit to the noise level fish will be attracted to. The noisy stuff will get few responses in calm water.

For dead-calm water, the best choices are generally the Hawg Wobbler or Creeper types. Also, throw in the zig-zag stuff here. These lures can be deadly from calm water to moderate, but seem to lose their edge in heavy waves. In moderate wave action, the prop-types, globe and Tallywacker-style stuff works great. Certain lures that fall into these categories are noisier than others. These can be very effective in rough water, as well, and would be my suggestion in the roughest conditions.

The sound factor is very interesting. Any true surface bait expert will tell you that subtle differences in sound can make all the difference, and that often two lures of the exact same type will have slightly different sounds out of the package and that one will out-fish the other. With the exception of zig-zags, these lures can be tuned to produce different sounds. Some come with instructions; some don’t. But slight tweaks will change the sound. It’s a tough art to learn, because what you think sounds good really doesn’t matter all that much. The fish have to tell you that, but some folks have really mastered the art of tuning to get different sounds out of the same lures to see what fish are in the mood for.

Surface bait gurus are usually masters at detecting follows too. Anyone would notice a 6-inch-high hump of water behind their bait, but the more subtle stuff requires a watchful eye. Basically, it has everything to do with how close the fish is holding to the surface. Often rather than a hump, there is just a slight disturbance created by the back fin or tail of a muskie that is following a little lower. If this can be detected, there is a better chance of doing something that may trigger a strike before the lure reaches boat-side.

Basically, triggering a fish noted in mid-retrieve is preferable, and simply changing the pattern of the retrieve is usually the best approach. These tactics include pauses, twitches, zig-zagging, speeding up (generally, speeding up is always a good idea) or stopping (not slowing; stopping). Often, a long rip followed by a stoppage works too. If these things don’t trigger, or the follower isn’t noticed until lure is at boat-side, with most surface lures, a subsurface figure-eight is the best way to go, as fish are if anything, more apt to strike – and subsurface hook-ups are much better. Fish will strike at the surface, but odds are better below.

A Muskie Fishing Tip for Use With Spinnerbaits

From Top to Bottom Fishing for Winter Pike