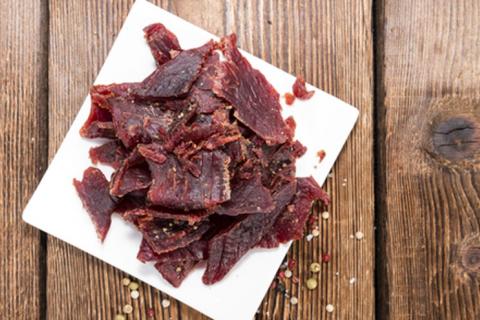 Jerky – real handmade, artisan jerky made from meticulously cared for strips of real, lean meat – is the ULTIMATE camping food. It has been for a long, long time all around the world. There are versions of jerky originating from every inhabited corner of the globe. Before refrigeration, there was a big time need for a way to preserve meat. Drying it and salting it was the way to do that. The fact that removing the moisture also significantly reduced the weight was a wonderful side benefit for anyone on the move – like Lewis and Clark’s Corps of Discovery … and today’s car camping family. 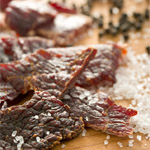 At its most basic, jerky requires only lean meat cut into strips thin enough to dry efficiently and salt (either plain rubbed on the outside or from an ingredient source like soy sauce or Worcestershire sauce in which the meat is marinated). That’s it. However, most recipes incorporate more spices and flavorings like black pepper, liquid smoke, etc. And from there, the sky is the limit! Ingredients for rubs and marinades for jerky can range to the truly exotic and phenomenally expensive. 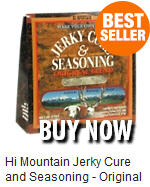 There are many delicious prepackaged jerky seasoning kits that make jerky making at home so easy and convenient.

CHECK OUT SOME GREAT JERKY KITS at Bass Pro Shops

Why is good jerky at the meat market so expensive? Think about it. It’s made from the same meat you buy at the other end of the counter, but most of the water is removed from it. So if the cut of fresh meat sells for $10/pound and it’s 70% water, that means the same cut weighs less than half once it’s made into jerky so they have to charge at least 50% more for it … and that’s without figuring in time and other ingredients!

Making Your Own Jerky 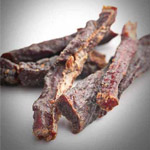 As you’re planning for your summer camping adventures, a great way to involve your whole family in the preparation is to make up big batches of jerky for those trips. It’s a fun and educational process for a season when the weather isn’t so conducive to family camping, and it’s one you’ll enjoy twice – during the making and the eating weeks or months down the road.

Here are some basic tips for making safe, delicious jerky:

The Right Stuff for Making Jerky

While you can make jerky with a couple pounds of beefsteak, ingredients you likely have in your kitchen cupboards, and your regular oven—a few specialty items will make the process easier, faster, and even more tasty. We've provided a list of links below.

Camping: 12 Great Ways to Fight Mosquitos and Ticks From the Skin Out

How Do You Know If You’re Camping or Glamping?

50 Campfires is America's camping authority. Our mission is to provide trending information, articles, reviews, recipes, camping locations, how-to’s, and 101 advice to help family car or RV campers enjoy every minute they spend in the outdoors.