Tips to Spit Roasting Over an Outdoor Open Fire (recipes) 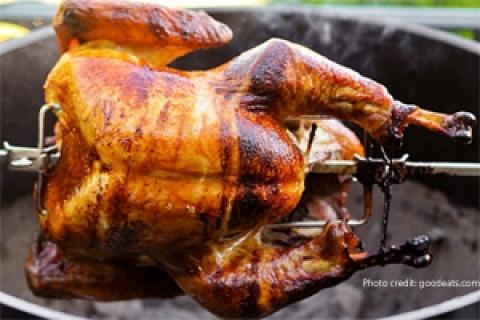 Spit roasting is the oldest method of cooking known to man. It's easy to imagine an early American squatting by an open campfire, turning a hunk of spitted meat over the flames. The tradition can be traced back at least to the Trojan wars. And, several centuries later, records show Hungarian villagers celebrated weddings by "spitting an entire 2,000-pound ox stuffed with a calf stuffed with a lamb stuffed with a capon stuffed with a quail." The time required to cook such a mammoth meal is entirely a matter of conjecture.

At first, the spit was hand-turned so the meat would brown evenly. Later, cooks employed the unwilling services of a spit dog, and still later, clock spits were invented that did the job effectively. Today, we use electric spits called rotisseries, and it is a mouth-watering sight to see a fat mallard or goose turning on one and acquiring a heavenly golden glaze as it evenly bastes itself with its own juices.

The chief advantage of rotisserie cooking in the outdoors is that large pieces of meat such as whole game birds and roasts cook evenly on all sides. The rotisserie, attached to the hood of the grill, slowly turns the meat over a gas fire or coals until it is done. With lean meats like game, frequent basting is required to seal in natural juices. But the taste is well worth the exercise. Spit-roasted game is tender and juicy inside, with a parchment-crisp exterior. No other method of cooking brings out the rich natural flavor that makes wild game such a special treat. 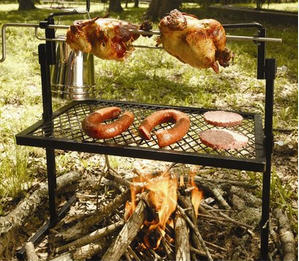 Before cooking any food, it must be balanced on the spit so it turns and browns evenly. The object is to have the spit passing through the center of gravity. The meat should also be compact and well-fastened, turning with the spit, not slipping around it. This means not only that the meat should be tied or trussed securely but also that the holding forks on the spit must be properly placed and tightened.

Boneless roasts and tenderloins are rolled and tied with heavy cotton string to create an evenly shaped cylinder. The spit is then run through the center from end to end.

Game birds are first trussed with skewers and/or string to hold wings and legs in place. Large birds, such as ducks, geese, turkeys and pheasants, are spitted head to tail, with the spit running through the body cavity of the bird. With small birds, run the spit through the sides, placing several birds on the spit so the head end of one is beside the tail of another. Run a couple of long skewers through the birds, top and bottom, parallel to the spit, so they all turn at the same time.

Now, with palms open, gently roll the spit back and forth in your hands. If it rolls smoothly, the meat is secure and well balanced. If the meat slides or the spit rolls awkwardly, remount and retie it. Or if your rotisserie is so equipped, use adjustable weights for counter-balancing uneven loads. They attach right on the spit and are useful for large or irregularly shaped cuts of meat.

Cooking Over the Fire

Rotisserie cooking is best done over moderate coals or a medium gas fire. When using a charcoal grill, position the coals along the back half of the grill. They should extend three or four inches past each end of the meat you're roasting. Place a drip pan under the front half of the meat to catch its juices. Add five or six briquettes to the fire every 30 minutes or so to maintain even heat throughout the cooking process.

A meat thermometer takes the guesswork out of rotisserie cooking. Push the thermometer into the thickest part of the meat, making sure it doesn't touch bones or the spit. Secure with wire or string if necessary.

Venison is rare at 140 degrees, medium at 160 and well-done at 170. Wild boar and bear should be cooked to at least 170 degrees to destroy parasites that cause trichinosis. Basting adds to the flavor and gives a nice glaze. You can use the drippings from the meat or other fat, alone or mixed with wine. Or you can prepare your own special basting sauce. 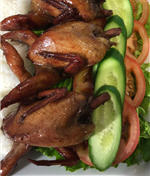 Gradually blend soy sauce into mayonnaise in a small bowl. Stir in last six ingredients, and pour over quail in a large zip-seal plastic bag. Press air from the bag, and seal. Refrigerate 2 hours, turning the bag occasionally. Remove the quail from the sauce, skewer on a rotisserie spit, and roast over medium heat for 40 minutes or until done to taste. 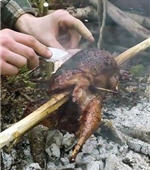 Combine wine, soy sauce, oil and garlic. Pour over pheasant in a large zip-seal bag. Press air from the bag, and seal. Marinate in the refrigerator 8 hours, turning often. Remove the bird from the marinade, and secure the wings and legs to the body with cotton cord. Skewer with a rotisserie spit, and turn over a medium fire for 2 hours or until done to taste.

Brush ducks last 15 minutes with the following: 1/3 cup each butter, orange juice and wild plum or crabapple jelly melted together and applied hot. 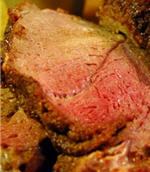 Marinate the venison for two days in a mixture of the remaining ingredients. Remove from marinade, rub with oil, balance on a spit, and roast over a moderate fire until the meat thermometer reads 140 degrees. Baste with marinade until the last 15 minutes of cooking.

The venison saddle is term for loin muscles, or muscles surrounding the spine or back area and is usually done on the bone, although the loin can be boned for steaks. 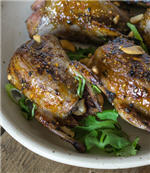 Marinate doves 4 hours in a mixture of the last three ingredients. Alternate on a spit, and roast slowly over moderate heat, basting them occasionally with the marinade. When the leg bones can be twisted away from the meat, the birds are done.