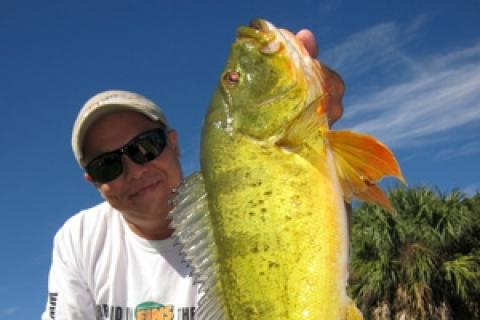 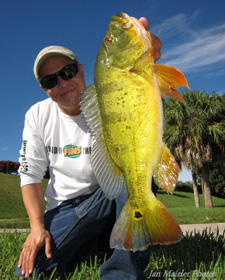 Any angler who follows this marvelous gamefish should know that South Florida's peacock fishery now presents a viable alternative to long, expensive, and often uncertain treks to the Amazon. While it is undeniable that the sheer size and numbers of these rainbow colored cichlids are found in the traditional Brazilian jungles, South Florida's peacock bass are not subjected to the profound variation of river water levels and dispersal/concentration changes that can affect the availability of the fish in the South American Amazon region.

Miami can be thought of as the epicenter of Florida's peacock fishery. An angler can literally get off a jet at the Miami International Airport and be fishing within 30 minutes. The distribution of the fish covers the lakes and canals of the city proper all the way out to the more pristine and "jungle-like" Everglades. Some of the biggest peacocks in the Miami — Dade county area are as large as 10 pounds — but enticing and/or catching these large and wise battlers is another matter. Yet catching "peas" up to 5 pounds can be considered commonplace in the Magic City.

One factor that affects peacocks is prolonged cold weather with dropping water temperatures. These gamesters have a tropical origin, making them vulnerable to cold weather in a range of responses from angling lockjaw to death in those rare instances that freezing air hangs over South Florida too long.

Miami recently had some quite frigid weather that plunged our air temperatures into the 40s for as long as a week. In a scenario that saw our marine and freshwaters getting rapidly colder, I decided to fish for peacocks within the most challenging conditions and called peacock expert Hai Truong of Urban Angler Miami for a guided trip. He readily accepted the challenge and we made a date 72 hours from the phone call.

When I met him at 7 a.m. that Friday, it was only 43 degrees. It was good to get into his fully outfitted SUV where all manner of tackle and refreshment was neatly stored and at hand. Hai's vehicle can be considered a land-based vessel for his on-foot guiding business.

When we got underway, Hai told me that he was sure of two things in our cold weather peacock hunt. Firstly, that as the sun got higher and the day got warmer, the peacocks could be expected to strike better. Secondly, given the "peas'" probable sluggishness, live bait might be the best choice early in the day. Therefore, our first efforts were directed to catching some small live bream. This was a fun experience in itself that took about an hour.

Hai found peacocks in the first spot where we stopped but he felt they were too small. This was also the case in our second and third stops. On the fourth stop, the bright sun in the winter sky revealed about a half dozen big peacocks soaking up the warmth on the edge of a large grass bed. We quickly assembled all our equipment from his vehicle to the waters' edge. When the smoke cleared, we'd caught and released three of the fish and pulled the hook on a fourth specimen. These fish were pushing 4-5 pounds and put up a wonderful fight. While I'm sure the fishing would have continued to get better as the day warmed, I had my findings and results, thanks to Urban Angler Miami.

Jan Maizler is a veteran writer, author, editor and blogger with over 40 years in the outdoor writing field. He has written eight books and more than 600 articles for all the leading saltwater angling magazines, as well as many prominent websites. He has traveled all over the world and is past International Game Fish Association world record holder for permit on 4-pound line and bonefish on 2-pound line.
END_OF_DOCUMENT_TOKEN_TO_BE_REPLACED