A Case for Fishing Big Pike 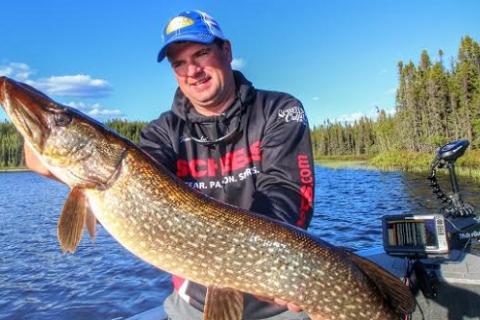 Northern pike are such an incredible predator.  Smooth and sleek with the curves of the most expensive sport car.  Rows of teeth that resemble tooth picks.  Amazing acceleration.  Pike are cool and really big pike are simply awesome to catch.

Consider this little tidbit of information.  Northern pike are found throughout the northern hemisphere across the upper third of North America from New York to Alaska.  These fish are also found across northern Europe and Asia.  A northern pike caught in the Balkens is almost identical to the same fish caught on Lake of the Woods. 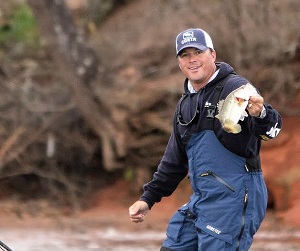 Right now in the fishing world, particularly in Minnesota where musky stocking has become controversial on some bodies of water, there has been a stigma associated with esox because these fish are such perfect predators.  While big northern pike and musky capture the imagination of anglers, they obviously eat other fish.  My own perspective on these big predators is that big predators whether they be big largemouth bass, musky or big pike almost always point to a good fishing lake.  The best panfish lakes, many of the best walleye lakes… good healthy fisheries almost always see predators that get to a top end size.

I think the argument that isn’t getting discussed nearly enough is that you are probably going to have northern pike or musky of some capacity on just about any lake in Minnesota or Wisconsin.  Would you rather have one forty inch pike patrolling a weed bed of fifty 12-inch hammer handle pike in the same vicinity?  I can tell you which option is worst for a fishery.

The smaller inland lakes of Minnesota used to have a lot of big pike and on so many of these lakes, the big pike were simply caught and kept by anglers.  On much of this water, musky have replaced pike as that large alpha predator and now serve that role to balance that particular ecosystem.

In some ways, musky are better suited to serve that role because by nature, musky are much more temperamental with short intense feeding windows and now with the protected slot limits, these fish can grow to a size to be useful for a fishery.

Pike are programmed much differently in that they are much easier to trigger and have much larger feeding windows.  Big pike are going to get caught fairly quickly so the only way you will see big pike is either on large water where the size of the lake can diffuse fishing pressure or if a lake is remote or has little fishing pressure.  When the big predators are gone, the pike population in particular seems to explode with extremely high populations of hammer handle pike.  The high densities of hammer handle pike that never seem to get past 24 inches are what you have to worry about and recent studies from the Minnesota DNR confirm that.

Over the past twenty years, opportunities across the board to catch really big musky have gotten much better while the opportunity to catch really big pike is becoming tougher.  In the lower 48, a northern pike over forty three inches is a rarer trophy than a forty eight inch musky, a twenty inch largemouth bass, a nineteen inch smallmouth bass, a twenty seven inch walleye or a ten inch bluegill.  Good catch and release practices are crucial for conserving big pike populations on most water because of the fishing pressure we see today… just as those same practices are crucial for conserving big musky.  If you think these big predators are the devil and want to kill them, fine have your hammer handles.  Low population densities of esox are good, high population densities are bad.

There are still opportunities however to target big pike and these predators provide an incredible angling experience.  Obviously, Canada reigns king for numbers of massive pike.  Northern Manitoba and Saskatchewan have so much big pike water.  If you draw a line from the Pas to Thompson Manitoba, the region to the north is staggering for big pike water.  We traveled to Wolverine Lodge near Lynn Lake, Manitoba last summer to film and the quality of pike was top notch.  There are also pockets of big pike scattered throughout northwest Ontario.  In the states, I don’t know if you can beat the Missouri River Reservoirs right now for numbers of quality pike.  Fort Peck in Montana is incredible.  Lake Sakakawea in North Dakota and Lake Oahe are both really good right now with good opportunities for fish over forty inches.  My home water of North Dakota’s Devils Lake produces some really nice pike.  Minnesota’s Red Lake, Lake of the Woods and Mille Lacs all have quality pike fishing opportunities for big fish.  There are more under the radar lakes and flowages across Minnesota and Wisconsin that still hold big pike.

Big pike are such an amazing fish in my mind.  Funny how when I take my eight-year old daughter and seven-year old son out fishing, their favorite fish are pike.  I was somewhat surprised as to why they liked pike so much… after all the rest of the world seems to be consumed with walleye.  The answers were pretty straightforward.  Pike are longer, splash more and they have cool teeth.  I couldn’t help but smile at these matter of fact answers that are coated with such simple honesty all young children seem to possess.  I can’t disagree.

A Primer on Pike—Lures and Tactics for Catching Northern Pike