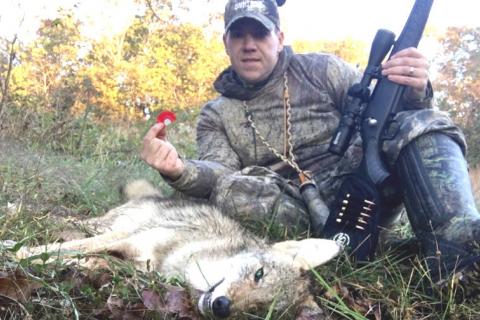 As the leaves begin changing into their beautiful fall colors and the temperatures begin cooling more with each passing day, the desire to venture outdoors and hunt becomes a priority to a lot of hunters. Although most of these hunters are in pursuit of whitetail deer or a mature fall gobbler, the early fall is also a great time to predator hunt. Coyotes are like everything else, they are tired of a long hot summer and are ready to enjoy what fall has to offer, which can be many things.

Not only are these immature pups in pursuit of their own food, they are obviously not as sly as adults, leading them to respond to a call more often than those who have so called “been around the block” a few times. Younger coyotes will not pay attention to wind direction or other signs of danger when responding to a call like an adult will often do. The desire to be able to “get food on their own” makes them respond to the sound of a rabbit in distress or other food source sound.

Early Fall Coyote Calling Tip: Younger coyotes are very curious when away from their parents by fall. They have recently began exploring and looking for food on their own. When calling, begin with a few howls then switch to coyote pup vocals with FoxPros Coyote Pup Diaphragm at Cabelas.com.

The curiosity of the younger coyotes will make them respond faster, while at the same time the adult coyotes will respond when making a coyote pup distress sound to see what is going on and to evaluate if a young coyote is in harm's way.

Another great reason to predator hunt during the early fall is that coyotes respond better to food source calls such as rabbits, rodents and birds. This is due mostly to the temperatures getting cooler. Just as humans do when we get cold, we want to eat to warm our bodies back up, this same rule of thumb goes for coyotes. When the night time temperatures begin lowering below freezing, coyotes start to search for more food in order to survive.  In fact, eighty percent of that calls that I make during the fall is some type of food source, my favorite being the many different rabbit in distress sounds found on my FoxPro Shockwave Electronic Game Caller. The other twenty percent of my calls is coyote vocals such as howls that create a territorial instinct in coyotes to respond better to calling. By incorporating howls into my calling sequence, I create the urgency between coyotes to get to a spot first and to keep other coyotes out of their area.

Coyote Decoy Tips: When using a predator hunting decoy mixed with calling from an electronic caller, one will want to place the decoy as close to the sounds that are being played as possible. This confirms to an approaching coyote that he sees exactly what he is hearing, making the realism fool him into coming into closer shooting range.

A Better Habitat To Hunt

As an avid predator hunter, I like to spend all year calling coyotes, even during the summer months of the year. However, fall is like a kick off to better hunting, due to the regional habitat being better to hunt during this time. Even though I hunt a lot of the same properties during the entire year, fall is when the crops get cut, and the grass begins to die off. This increases the ability to see longer distances when calling coyotes. The same goes for when I'm hunting in timber, as fall kicks into full swing, the underbrush begins dying off and eventually all of the leaves on the trees begin falling, which again means the ability to see better and at a longer distance.

Tip: Since predators can also see better during this time, I will use a decoy more. I prefer using a decoy such as the Lucky Duck Li’l Critter, the erratic motion of Lucky Duck's Lil Critter entices coyotes within range. Now that you can see predators coming from a further distance, this also means the predator can pick up on movement  easier. Using a predator decoy when calling gets the focus of attention on one particular spot instead of what is going on around them.

The sport of predator hunting and its benefits are becoming increasingly popular with time, however, the chances of it surpassing the popularity of hunting the white tailed deer during the fall, will most likely never happen. Yet, by taking advantage of the benefits of hunting coyotes during this time, the wait through the so called “October lull“ that many deer hunters speak of, doesn’t have to be spent sitting at home waiting on the rut to begin. The work of helping ones deer herd by practicing predator hunting can be enjoyed by hunters and conservationist during this wonderful time of the year.