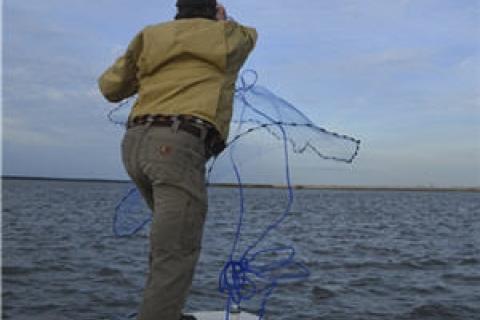 Shrimping. It’s simple really. Especially if you have the right saltwater equipment; or better yet, a friend who does. Here is the account of my first experience and a few simple ways you can catch a mess of these delicious crustaceans.

We launched my friend Margaret Ellen’s 17-foot boat just two hours before low tide; right around 3:00 p.m. Out through the creek and into the expanse of Bull’s Bay just off the coast of South Carolina, there was water beyond the horizon to the east and the surrounding sawgrass swayed in the lazy breeze. We followed a deep channel farther out into the bay to a small island shaped like a half moon where the water was shallow and the bottom not too rocky (or on an oyster bed). You’re allowed a 100-yard line by which you can mark your territory to catch shrimp. To do this, we used 10 poles, each 15 feet long and spaced 10 yards apart, and drove them into the soft floor of the bay. Then, the messy part began.

To catch shrimp, or anything else that inhabits water, you need bait. We used Bait Binder, which comes in the form of a powder, but is turned into a sticky goo by just adding water. In a 20-gallon bucket, Margaret Ellen kneaded the pungent dough until it was of the consistency of raw hamburger meat ready to patty, which we did. Before long, we had some 50 bait balls. We then eased down our territorial line and tossed them into the water – three or four here, four more there. We slowly drifted away from the poles, and after a brief time, in which we sat back with a barbeque sandwich and enjoyed the day, we returned, cast net in hand, to begin catching dinner.

The following are the basic essentials to shrimping:

1. Offshore fishing boat – preferably with ample room, or a deck, in the front for working the cast net.

3. Cast net – Six to eight feet in diameter will suffice.

4. Bait Binder – This stuff is easy to use, just add water. In fact, we caught some of the bait in the cast net, and it had hardly been damaged.

5. Buckets – We had two 20-gallon buckets (one with holes drilled in it to drain as the net was dumped) to make bait and then drop the shrimp in as we hauled in the cast net. There were also a couple five-gallon buckets aboard used for holding the old fashioned bait – clay and fishmeal.

6. Coolers (2) – One cooler would hold exactly 28 quarts – the legal limit of shrimp you can keep. The other was for food and beverage.

7. Frogg Toggs – If you’ve ever thrown a cast net, you know you’re going to get wet. And as it was a cool day, staying dry as possible was crucial; especially for the ride back to the landing.

A Different Angle on Outdoor Photography

Josh Wolfe is a freelance writer and photographer and the editor and publisher of The Golf Sport magazine. A graduate of Auburn University (B.A. English) and the Savannah College of Art and Design (M.A. Photography), he got his start in the outdoor industry first as a columnist with Outdoor Hub, which he maintains today, and later as an associate editor with Sporting Classics magazine and the editor of its online publication, Sporting Classics Daily. He lives on a farm just outside of…