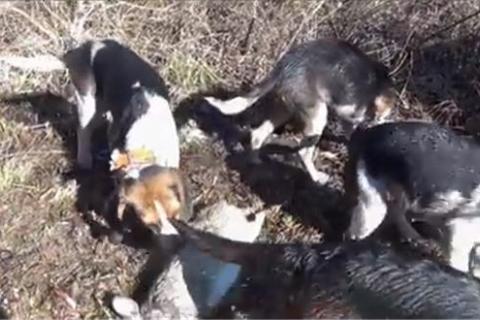 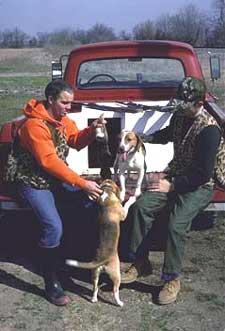 Some things fit together so perfectly that when one of the components is missing, the whole thing seems out of kilter. Rabbits and beagles are one such pairing. Compared to this combination, setters and quail or catfish and hushpuppies are mere also-rans. It's certainly possible to hunt rabbits without hunting dogs. Many hunters do. But it's difficult to hunt them as well, and it's usually not half as much fun.

Why Hunt Rabbits With Beagles?

There are two main reasons why beagling for rabbits is so appealing. First is the rabbit's instinctive habit of circling. Rabbits have a small home range, and they won't leave it even when hounded by beagles. So, when flushed from cover, a rabbit will likely bound away, leaving the dogs behind, then slow down until it feels menaced again, when it once more easily outdistances the beagles. But somewhere out yonder, usually not more than a couple hundred yards, Br'er Rabbit begins circling back to the spot where he initially hopped out.

The rabbit hunters follow the chase by listening to the baying of the dogs. That's the second big thrill of this fast-paced sport. The hurly-burly of a pack of beagles running a rabbit is heavenly music to the hunter's ears.

Before long, the chase turns back the hunter's way, and he climbs up on a stump to watch and wait. With luck, he'll catch a glimpse of the rabbit running, maybe hopping, depending on how far it's leading the dogs. Then, when the time is right, the shotgun is shouldered, the hunter takes aim, and another rabbit is added to the bag.

Usually. Sometimes the chase is so enthralling, the hunter doesn't want it to end. During these times, the gun remains cradled in the bend of an arm, while the hunter just enjoys the magical sights and sounds.

TIP: 12 Tips for rabbit hunters to bag a few cottontails or swamp rabbits on each trip afield

Tips From an Expert Rabbit Hunter

Lewis Peeler, a 35-year-old insurance salesman from Wynne, Ark., has been hunting rabbits in eastern Arkansas since he was a boy. He's packed away more than 20 years of experience beagling for cottontails and swamp rabbits, and you'd be hard pressed to find a more cordial and knowledgeable dog handler. I've tagged along with him on several hunts and have learned a great deal about the specialized tactics he uses when hunting rabbits with beagles. He knows the blueprint for success and depends on science, not luck, to find his quarry.

1. "One of the most important things to learn about hunting rabbits with dogs," Peeler says, "is not to rush your dogs. If you have a good dog, he'll get in there and work out all the good places where rabbits will hide. But if you stay too close to him, he'll tend to go through the cover too fast and move on.

2. "Dogs will often gauge their pace by your actions, and if you tend to want to go on, they will, too. It's best to stay back and give them time to work the cover out and get their noses into everything."

TIP: Rabbit Hunting 101: Rabbit hunting is a great way to introduce youngsters and novices to hunting.

Rabbit Hunters Need to Use Patience

Peeler says it's just as important to sit tight once the chase is on."After the dogs jump a rabbit, many people follow them and try to head the rabbit off," he says."The best thing to do, though, is to move to the area where they jumped the rabbit, and then pick a good place where you can see well.Then just wait for the rabbit to circle back.To me, that's the most enjoyable part of rabbit hunting, waiting there and listening to the chase.Why chase the rabbit down?That's why you have the dogs in the first place, so let the dogs do that."

Patience is a virtue too few rabbit hunters are blessed with, Peeler notes. "Patience is especially important when the cover you're hunting is real thick," he says, " because the rabbit may just play around with the dogs. Sometimes he won't budge until they push him real hard. You have to be even more patient when hunting swamp rabbits, because they'll run a much bigger circle than just regular cottontails."

This last fact was borne out on a hunt I made with Peeler in the L'Anguille River bottoms in east Arkansas. The cover we hunted was thick enough to hide a blaze-orange elephant. Saplings of sweetgum, sassafras, persimmon and elm shot up 8 to 12 feet tall and stood 50,000 stems to the acre, and though Lewis was only a few feet away, he was totally invisible, despite the fact that he was dressed in a hunter orange vest and hat that should have made him as conspicuous as a bear in a belly boat.

Rabbits were plentiful. Lew's two lemon-and-white beagles, Bear and Reb, hadn't stopped running since we'd released them. And as luck would have it, we bagged two plump cottontails in our first half hour of hunting. After a short chase, each had circled back to within a few feet of the point where it was flushed.

The third rabbit, though, had distinctly different plans. More than 30 minutes passed before the dogs came back into earshot. They had followed the rabbit on a long circuitous route that took them half a mile away. We listened as they grew closer, then finally headed in opposite directions through the thickets, hoping one of us would manage to be in the right place at the right time when the little brown ghost came passing through. The hullabaloo grew louder and louder as I strained my eyes to see through the dense cover. Any second now, and...

Boooom! The report from Lew's shotgun off to my left startled me. I looked in that direction and saw him fight his way through a briar patch, from the midst of which he retrieved a rabbit nearly as big as one of the beagles running the race. Not surprisingly, when the pack of dogs came into sight, they snuffled and bawled their way right past the spot where I had been standing, proving once again that a rabbit had gotten the best of me.

Lewis placed the big swamp rabbit on the ground, then pulled a cottontail from his game bag. When he hoisted the two up for me to see, it was obvious there were some major differences. Both were similar in appearance -- peppered brown coloration, fluffy white tails, long ears, big feet. But the swamp rabbit was nearly twice the size of the cottontail Lew had shot earlier. It was like comparing a beagle to a St. Bernard.

"I'd be the last to complain about shooting a mess of these nice cottontails," Lew said. "But when you can throw in a few of the big swampers, too, it really makes things exciting."

Though we hunted with two dogs that day, Peeler prefers to hunt with no fewer than three beagles, and considers four the optimum number. "Beagles have different characteristics," he says. "Some are good jump dogs. They'll get in there and really work the tracks and get the rabbits moving. Other beagles are better chase dogs. They'll get on the trail once the rabbit's moving and keep after him. You want both kinds in your dog pack, and you have a better chance of that if you hunt with several dogs."

Peeler is also quick to point out that finding a good swamp rabbit dog is a rare treat. On a good day, a beagle chasing swampers and cottontails will work five times as hard as a dog chasing cottontails alone. For a dog to work productively in bottomland rabbit areas, it should have a Labrador retriever's affinity for cold water and must be persistent, well-trained, keen-nosed and in topnotch physical condition. Swampers run straight, hard and long. They're crafty, running or swimming through water, holing up in hollow trees and scurrying through every available bit of cover to throw the hounds off the track. Only the best rabbit dogs can keep up at a steady pace throughout the day.

Hunting under the proper weather conditions can tip the odds in the hunter's favor, says Peeler. "Moist, cool weather is best, because the ground holds the scent better," he explains. "Extremely cold days or dry days aren't good, and dogs usually won't do as well when there's snow on the ground, either. Cool fall days when the ground's a bit moist are really the best."

Of course, not every rabbit hunter can afford the luxury of a pack of beagles. Training dogs, and giving them proper care, can be expensive and time-consuming. The investment of time and money is too prohibitive for many sportsmen busy with other day-to-day affairs.

Nevertheless, many hunters are smitten with a passion for beagles and bunnies, and any work required to savor this exciting combo is a labor of love. For those fortunate few, there will be a time this season when they're wishing the beagle music would never end. Lewis Peeler will be one of them.