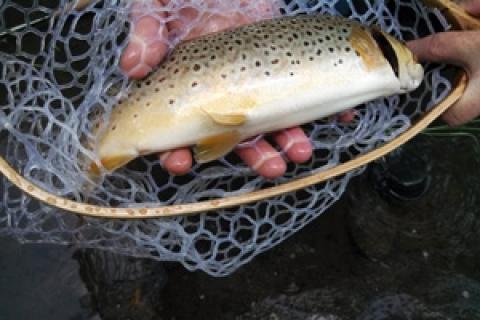 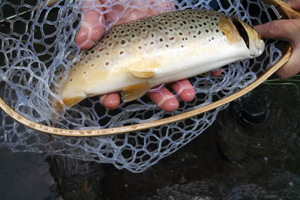 Centre County, Pennsylvania's Spring Creek ran low and clear when my friend Art and I crossed it last Saturday. The public access area at the Benner Springs hatchery had a few vehicles.

Despite the presence of the hatchery, as well as another four miles downstream at Bellefonte, Spring Creek's trout fishery is one of wild stream-bred brown trout. The hatcheries make use of the fertile water to rear trout which are stocked elsewhere in the state during the spring months.

The portion of Spring Creek we planned to fish flows through what's called the "Canyon," a semi-remote four-mile stretch that was formerly owned and controlled by a nearby state penitentiary. For nearly a century access was not permitted. About three years ago the land was made available to the public; for the most part it's now managed by the state game and fisheries agencies.

While much of Spring Creek is easily accessible, the canyon section provides a venue for those willing to walk a ways to escape competition from other anglers, an aspect that's at a premium on such a famous stream, one that flows through the bustling town of State College and Penn State University.

We parked the truck and embarked on a lengthy hike down the path that parallels the stream. Once past what we figured were the bulk of the other anglers we each eased into promising looking pools.

Spring Creek is rich in food. At this time of year its trout are known for keying in on caddis poopah as well as tiny crustaceans like scuds and sowbugs. I rigged up with a two fly set-up, with a size 18 Copper John as the point fly, and a size 14 Pheasant Tail nymph about a foot above it. A few feet up the leader I pegged a small strike indicator.

After about two fishless hours — at several good looking pools — I decided it was time to experiment. The strike indicator seemed a bit course for the low, clear water, so off it came, followed by a procession of various flies, including the reliable, though often maligned, green ***, size 16.

Working the same deep, rocky run where I'd drifted an assortment of flies, the green ***, assisted by a BB-sized split shot, ticked the bottom. On about the fourth try the end of the fly line, where it joined the leader, took a slight pause. I lifted the 8 1/2-foot St. Croix Avid 4-weight, and was soon fast to a 15-inch wild brown.

That same run produced several more hookups, though I must admit many of them of them turned into long distance releases, the result of ultra-light takes combined with my rustiness. Regardless, the day was a great success, with just enough frustration to get me back there as soon as possible for a rematch.

Catching Speckled Trout the Gators of the Gulf

David A. Brown for Trout

Jeff Knapp, of Kittanning, Pa., has been covering the outdoors for over 20 years. He's been published in a wide variety of national, regional, state and local publications. He also operates the Keystone Connection Guide Service, which focuses on fishing for smallmouth bass on the Allegheny River, as well as other species in select western Pennsylvania waters.Â
END_OF_DOCUMENT_TOKEN_TO_BE_REPLACED