The Promise of Spring Creek Trout 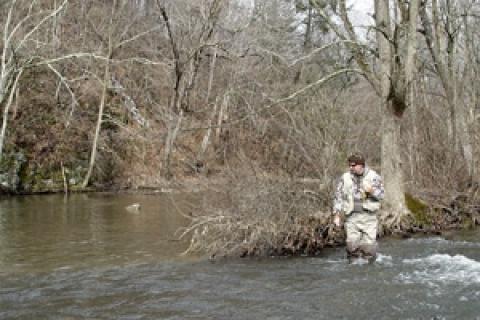 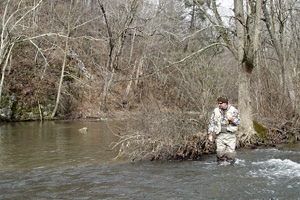 With a somewhat depressing finality I finished my last entry in the journal and closed the book — both literally and figuratively — on another grouse season. A two-and-a-half hour push amidst driving snow showers had produced only one flush. During the two previous hunts, under more favorable conditions, we'd moved three to four birds per hour.

Grouse no longer an option, it's time move on to other outdoor pursuits. Typically this would be walleye and sauger fishing on the local rivers of western Pennsylvania. But it's been a season many around here call "an old-fashioned winter," with plenty of sub-zero temperatures. Hence the rivers are locked in ice, as are the smaller trout streams that hold native brookies and wild brown trout. But what will be open are the many spring-fed trout streams of central Pennsylvania, and the forecast is calling for above-freezing temperatures next weekend!

Unlike freestone streams that receive their water from rain and snow melt-off, these creeks are fed from underground limestone aquifers. They enjoy a year round level of stability in both flow and temperature, providing trout-fishing options at times when other streams don't, as in the dead of winter.

I recall a trip made last February to Centre County's Spring Creek. Spring Creek is heavily steeped in trout-fishing history. Its "Fisherman's Paradise" section was one of the nation's first specially regulated catch-and-release trout projects. Back in the 1950s and '60s anglers would line the bank for the chance at the over-sized trout which were stocked there.

Today Fisherman's Paradise continues to be managed at catch-and-release, fly-fishing-only. Long gone, however, are the plantings of hatchery trout. Nearly all of Spring Creek's trout population is comprised of stream-bred browns.

On that trip my partners and I managed to land several of Spring Creek's wild trout, ones that fell to tiny nymph patterns; just enough action to warm an otherwise cold winter day...and make the wait for springtime a little shorter.

If the weather cooperates even a little bit you'll be hearing more here about limestone creek trout in the weeks to come.

Catching Speckled Trout the Gators of the Gulf

David A. Brown for Trout

Jeff Knapp, of Kittanning, Pa., has been covering the outdoors for over 20 years. He's been published in a wide variety of national, regional, state and local publications. He also operates the Keystone Connection Guide Service, which focuses on fishing for smallmouth bass on the Allegheny River, as well as other species in select western Pennsylvania waters.Â
END_OF_DOCUMENT_TOKEN_TO_BE_REPLACED