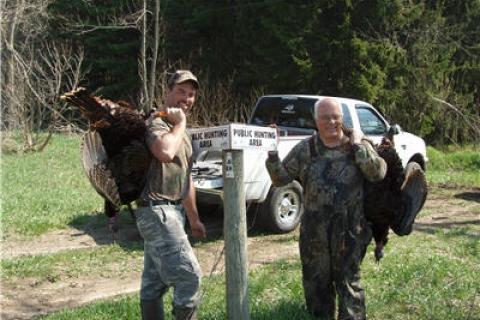 Most hunters shy away from the state and federal lands due to the fear of hunting pressure and shorter seasons associated with government lands.  As with deer hunting, I’ve found that, if you use the hunting pressure to your advantage, things can fall into place. 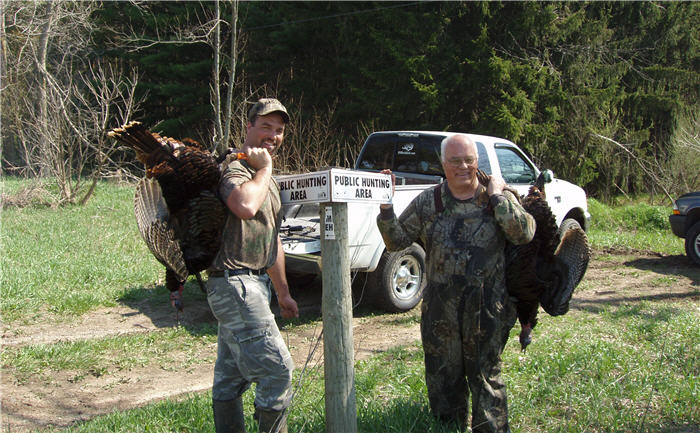 In past years, I would apply for a permit on my father’s land in northern Michigan, knowing that the abundance of birds in the area would give me a shot at a productive season. Tags on the other hand, were hard to come by. The applicants were greater in the areas of known bird concentrations, which seemed to turn the application process in these prime areas into a gamble of sorts, decreasing my chance of drawing a tag.

With the growing population of relocated birds in southern Michigan, I decided to concentrate my effort on scouting state lands within a short distance of my home. The results were amazing. I located turkeys on several state-owned parcels not more than a half-hour’s drive from my home base. I found that tags were more available and the turkeys were plentiful.

After extensive scouting for the last few years, the opening day of the 2009 turkey season proved to be a prime example of using public land pressure as an advantage. My father and I drove out to a small section of state land on opening morning. We set up in an area I knew to have a lot of activity. The toms were roosting on a private piece of property a half mile away, adjacent to where we set up.

A half mile may seem to be a long way from the roost, but we set up in an area the birds would head to when the pressure was on. We placed our decoys on a hard wood ridge leading into a thick marshy tag alder swamp.  We knew we wouldn’t have much action early, but we were counting on the birds working their way down the ridge later in the morning.

The sun was just breaking the horizon when two hunters passed by, apparently running a little late. The toms were gobbling in the distance and my father and I laughed as we watched the latecomers pick up their pace. We knew we were in an area the birds liked to visit.  We knew the toms were interested in rounding up hens that nested near the thick swampy area near us. The hens, on the other hand, were just not ready to do any breeding, so we were prepared to sit all day and wait for them to come to us.

Conventional tactics for turkey hunting involve a lot of “run and gunning,” but hunting pressured birds is a little different.  If provoked by soft random calling the pressured toms would eventually end up in front of us.

The gobbling slowed down around 8:30 and the calling from the two other hunters seemed to come from every inch of the property to the east. By 9:00, though, the other party, discouraged, headed to their truck and left.  We let the woods quiet down for the next hour and just relaxed and enjoyed the morning.

At 10:00, I let out a couple of soft yelps from my mouth call and a bird responded with a gobble to the south. I knew the birds had been hearing a lot of aggressive calling so we sat back and decided to wait another half hour before calling again.

Patience is the name of the game when hunting pressured birds. They may not be the smartest animals in the woods, but they definitely have a good sense of survival. Luckily, in the spring, toms have short-term memory, and that’s where you can take advantage of a situation like this.

At 10:30, I let out a locator yelp. Almost instantly a tom let out a gobble a few hundred yards to the east. Again, I didn’t want to over call so we decided to sit tight for a while.

The sun was getting pretty high and I knew we had a good chance of a tom sneaking in without making a sound. We had the hen decoys in plain view of any approaching bird for at least 80-100 yards, and we were at full alert.  I was changing calls when my dad whispered “there’s two gobblers in the decoys.” He was already in position with his 1100.  I cracked a smile and slowly reached for my bow.  The extra effort we spent concealing the blind before daylight proved to our advantage. The birds had no idea that we were there.

I asked my dad if he was ready and he replied, “yeah.” I placed my pin on the top of the breast on the lead tom. Without thinking, my arrow was on its way, breaking his neck. My dad followed up, making quick work of the other gobbler.  We looked at each other and laughed, when my dad said, “I wonder why those other guys were in such a hurry?”

The moral of this story is that turkeys are just turkeys. They pick their home turf and will always return to the area where they feel safe. If you put in the time and scout the pre-season, you‘ll be one step ahead.