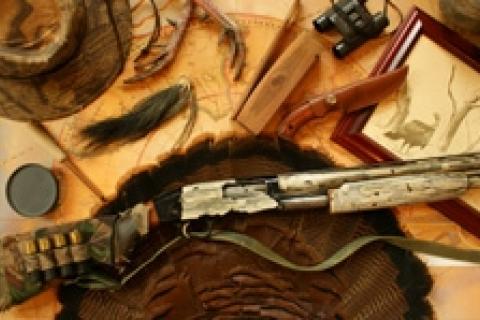 Birds can be flocked-up during the earliest phase of spring turkey season, and our turkeys were. Jim Martin and I had a plan in the early season to hunt a little old school going after dominant birds, without turkey decoys, while documenting it on video in the Florida panhandle. Not only does this provide the ultimate challenge, but when you are successful harvesting the dominate gobbler, the woods really open up for a more exciting season. With the boss removed from the equation, other gobblers see an opportunity tom strut their stuff and usually become very vocal.

The dominance amongst the turkeys is established in February in the South and as late as March in the north. Male groups and hen groups start gathering, chasing and fighting to establish their group dominance and breeding rights. During this early phase the hens are not yet ready to breed, but the Toms are. It is not unusual during this time to hear gobbling and aggressive hen calling to gather the flock.

Our first morning hunt started with intermittent thunder and light rain. This kept us from exposing our video equipment, but not from the hunt. We found our dominate gobbler first thing hammering on the roost to every thunder. We moved to within 150 yards and setup on a logging road intersection. It wasn’t long till the gobbler pitched down moving within gun range, but staying just out of site gobbling his head off.

Jim and I started some aggressive cutting to get his attention, and here they all came. First the hens, then a bachelor group of jakes. They all moved right past us heading to the dominate Tom. They were all very vocal and soon the fighting purrs and flapping wings let us know they were all just out of our site.

I am setup and looking in their direction, while Jim is between us stuck pointing the other direction. I shut up, but Jim continues to cut and gobble very aggressively. It wasn’t two minutes and the gobbler steps into the road just 25 yards straight down gun my gun barrel. Jim is almost directly in my shooting lane and could not hear that the Tom was only a 10 steps behind him. Getting Jim's attention I whispered to be quite, "He is right behind you and coming our way." Not understanding me, Jim started aggressively cutting again. The gobbler did not spook, but abruptly turned and headed the other way, leading the entire flock with him.

The remainder of our hunt that day and the next morning was spent working this flock of over 10 hens, jakes and gobbler. We were successful at getting the boss hen to come in close to check out our aggressive calling, but nothing else. The gobbler almost always responded to our calls, but never thought twice about giving us another opportunity. At one point in late morning we located and observed the entire flock loafing while the dominate bird strutted and drummed for over an hour.

It is not easy to take out a dominate Tom in early season in such a large crowd, but when successful, your reward is the dominate bird as a trophy, and the days that follow will produce many more vocal gobblers!

Teachers teaching the skills you need. Together with top rated Outfitters in North America, Bass Pro Shops 1Source and Global Outfitters helps you learn WHERE to go on your next adventure, HOW to learn the skill you…